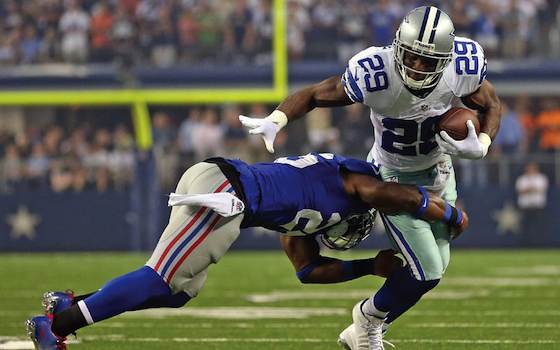 In a crucial NFC East clash, the Giants host the Dallas Cowboys at MetLife Stadium.

After an 0-6 start, the Giants have won four in a row and now find themselves in the playoff hunt just one-and-a-half games out of the top spot in the NFC East trailing the Philadelphia Eagles (6-5) and Dallas Cowboys (5-5).

Last week, the Giants beat the Packers at home 27-13. Eli Manning finished the game 25-of-35 for 279 yards with one touchdown and an interception. Victor Cruz led all receivers with eight catches for 110 yards and Rueben Randle scored the lone touchdown through the air. Andre Brown led all rushers with 18 carries for 66 yards. Jason Pierre-Paul sealed the Giants victory when he intercepted Scott Tolzien and scampered 24 yards for a touchdown.

The Dallas Cowboys were dealt a 49-17 road loss by the New Orleans Saints prior to their bye week.

The Giants were their own worst enemies in the season-opening game. They committed six turnovers that led to 24 Dallas points and they fell to the Cowboys in AT&T Stadium, 36-31.

Eli Manning threw for 450 yards and four touchdowns, including three to Victor Cruz. Tight end Brandon Myers had the other score. For the first time in franchise history, the Giants had three receivers with 100 yards apiece in a game. Cruz had 118 yards, Hakeem Nicks added 114 and Rueben Randle added 101.

The Giants defense has turned in solid performances during their 4-game winning streak holding their opponents to just 11.8 points per game. At the same time, the Giants offense has settled down relying on a more conservative yet effective offensive game plan. The Giants have committed only six turnovers over the past four games versus 23 over their first six games.

The Giants now face a better Cowboys offense led by A-list quarterback Tony Romo. Plus, Dallas is coming off their bye week.

Look for the Giants to continue their improbable playoff run against a Cowboys team with only one road victory this season.