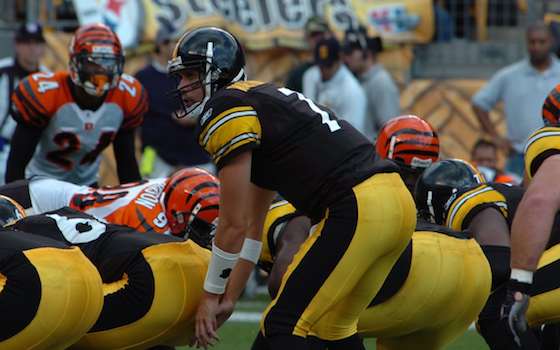 Steelers Quarterback Ben Roethlisberger, Bengals linebacker Vontaze Burfict and Colts kicker Adam Vinatieri are the AFC Players of the Week for games played the 11th week of the NFL 2013 season

Roethlisberger completed 29 of 45 passes (64.4 percent) for 367 yards with four touchdowns versus zero interceptions and a 119.4 passer rating in the Steelers' 37-27 win over Detroit.

His four touchdown passes led the NFL in Week 11. Posted his seventh career game with at least four TD passes.

Through Week 11, Roethlisberger has 2,901 passing yards, the most in the first 10 games of a season in franchise history.

In his 10th season from Miami (OH), this is Roethlisberger's ninth career Offensive Player of the Week award, the most of any Steeler since the accolade was instituted in 1984. He most recently won the award in 2011 (Week 8).

He joins kicker SHAUN SUISHAM (Week 7) as the second Steeler to win Player of the Week honors this season.

Burfict registered 15 tackles, one tackle for a loss, forced one fumble and had a fumble recovery-touchdown in the Bengals' 41-20 win over Cleveland.

In the second quarter, Burfict knocked the ball loose from Cleveland running back CHRIS OGBONNAYA and recovered it for a 13-yard fumble return-touchdown.

Played a pivotal role in a Bengals defense that registered three interceptions, four sacks and limited to the Browns to 330 yards of total offense.

Burfict has a team-best 118 tackles this season and has led or tied for a team-high in tackles in 10 of the Bengals' 11 games this season.

In his second season from Arizona State, this is Burfict's first career Defensive Player of the Week Award.

He is the first Bengals linebacker to earn Defensive Player of the Week honors since BRIAN SIMMONS in 2005 (Week 9).

Burfict joins ANDY DALTON (Week 6) and MARVIN JONES (Week 8) as the third Bengal to win Player of the Week honors this season.

Vinatieri converted all three field-goal attempts in the Colts' 30-27 win at Tennessee on Thursday Night Football.

Vinatieri registered his fourth field goal of 50+ yards in 2013, tied for the most in a single-season in his career.

His four field goals of 50+ yards are tied for the second-most in the NFL this season.

He has now scored at least one point in 155 consecutive games.

In his 18th season from South Dakota State, this is Vinatieri's 14th career Special Teams Player of the Week Award, surpassing JOHN CARNEY and DEVIN HESTER for the most since the award originated in 1984. He most recently won the award in 2010 (Week 17).

Other nominees for AFC Offensive Player of Week 11 as submitted by AFC clubs:

Indianapolis running back DONALD BROWN, who rushed for 80 yards on 14 carries (5.7 average) with two touchdowns.

Miami tight end CHARLES CLAY, who had six receptions for 90 yards (15 average) with one touchdown in the Dolphins' 20-16 win over San Diego.

Cleveland wide receiver JOSH GORDON, who had five receptions for 125 yards with one touchdown in the Browns' 41-20 loss at Cincinnati.

Oakland running back RASHAD JENNINGS, who rushed for 150 yards on 22 carries (6.8 average) with one touchdown in the Raiders' 28-23 win at Houston.

Buffalo rookie quarterback EJ MANUEL, who completed 20 of 28 passes (71.4 percent) for 245 yards with two touchdowns versus zero interceptions and a 121.9 passer rating in the Bills' 37-14 win over the New York Jets.

Baltimore running back RAY RICE, who rushed for 131 yards on 25 attempts (5.2 average) with one touchdown in the Ravens' 23-20 overtime loss at Chicago.

Other nominees for AFC Defensive Player of Week 11 as submitted by AFC clubs:

Pittsburgh safety WILL ALLEN, who had a team-high nine tackles, one forced fumble and an interception.

New England defensive end ROB NINKOVICH, who had nine tackles and two sacks in the Patriots' 24-20 loss at Carolina.

Denver defensive end SHAUN PHILLIPS, who had 10 tackles, 1.5 sacks and two passes defensed in the Broncos' 27-17 win over Kansas City.

Other nominees for AFC Special Teams Player of Week 11 as submitted by AFC clubs:

Cincinnati safety TONY DYE, who recovered a blocked punt and returned it 24 yards for a touchdown.

Oakland punter MARQUETTE KING, who punted 11 times for 540 yards (49.1 average), including four punts inside of the 20-yard line.

Houston punt returner KESHAWN MARTIN, who returned three punts for 125 yards (17.9 average), including a 87-yard PR-TD in the Texans' 28-23 loss to Oakland.