Panthers and Dolphins Face Off in Miami 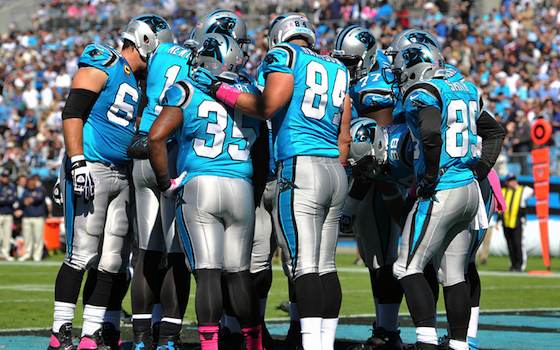 The Panthers face the Dolphins on the road coming off a 24-20 victory over New England. The Panthers have now won six in a row and are just one game behind the Saints in the NFC South. Miami is in the thick of the AFC playoff race at 5-5 after defeating the Chargers 20-16.

Panthers quarterback Cam Newton and a strong defense have been the keys for Carolina during their six-game winning streak.

A balanced attack and ball control have been the hallmarks of the Panthers' offense this season. The Panthers have had 315 rushing plays (49.1%) and had 327 passing plays (50.9%). Carolina ranks second in the NFL in time of possession, first in drives of 5-plus minutes and fifth in 10-play drives.

Quarterback Cam Newton has helped lead the Panthers to a 6-0 record in the last six weeks with strong play. Newton has a 101.7 passer rating over the past six weeks. The third-year quarterback has thrown 10 touchdown passes and only three interceptions with a completion rate of of 67.4% (116 of 172) for 1,294 yards,

Second-year middle linebacker Luke Kuechly has been the key to the Panthers defense. According to Jon Gruden, former NFL coach and current Monday Night Football analyst:

"I think he's the best linebacker, hands down, in football. This kid is very unique. He can knock you down easily. He can find the ball. He can cover. I mean he makes a play against (Atlanta tight end) Tony Gonzalez, I had to go outside and shake my head and get some air. This double move that Tony Gonzalez runs against everybody, Kuechly just wheeled and intercepted it. There's nothing the kid can't do."

The Dolphins proved last week against the San Diego Chargers that -- despite all the controversy -- they are still able to win. The game was a see-saw battle throughout as the Dolphins allowed only one touchdown, forcing the Chargers to twice settle for field goals in the red zone. However, it was only the second win in the past seven games for the Dolphins (5-5).

Against the Chargers, the Dolphins relied on their passing game as Ryan Tannehill completed 22 of his 35 passing attempts for 268 yards and 1 touchdown. Tannehill was sacked four times and the Dolphins managed only 104 rushing yards.

Trailing by four points with 1:54 left in the game, San Diego still had an opportunity to win. Starting from their own 17, Philip Rivers drove the Chargers to the Miami 25. On the final play, Rivers was unable to connect with Vincent Brown in the end zone.

Rivers threw for 298 yards and Ryan Mathews ran for 127. But the Chargers were penalized 10 times for 76 yards, including two penalties which cost them 11 points in the first half.

But don't be fooled, it should be a relatively easy win for the Panthers.

The Dolphins aren't able to match up with the Panthers. Carolina possesses a balanced offense with a physical rushing attack, a talented trio of receivers, and a versatile quarterback in Cam Newton. On defense, the Panthers are simply too physical and aggressive for the Dolphins to handle.

After back-to-back wins over the Niners and Patriots, the Panthers are the new media darlings of the NFC, but a trip to Miami may be tougher than it looks

NFL 2013 Week 12 Preview: Panthers and Dolphins Face Off in Miami