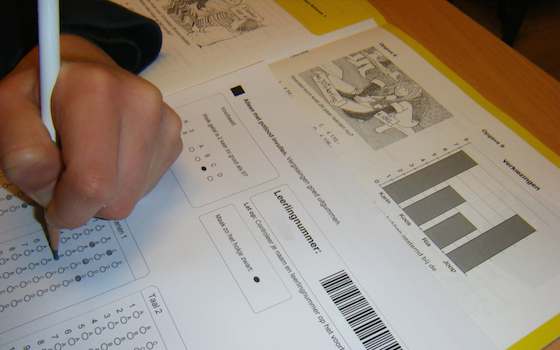 A mind is a terrible thing to test, especially a child's mind -- if, in so doing, you reduce it to a number and proceed to worship that number, ignoring the extraordinary complexity and near-infinite potential of what you have just tested.

"In every work of genius we recognize our own rejected thoughts: they come back to us with a certain alienated majesty."

What if the American education bureaucracy understood these words of Ralph Waldo Emerson and honored the latent genius of every student? What if it funded teachers and schools with as much enthusiasm as it did corporate vendors? What if, in some official way, we loved kids and their potential more than the job slots we envisioned for them and judged them only in relationship to their realization of that potential? What if standardized testing, especially the obsessive, punitive form that has evolved in this country, went the way of the dunce cap and the stool in the corner?

What if the education process were allowed to move the human race to a higher level of awareness? That is to say, what if it weren't stagnant and political but, instead . . . sacred, in the way that it feels sacred to hold an infant in one's arms?

I know that's asking a lot, but I feel emboldened to pose such questions as I become aware that standardized testing and the all-pervasive political hold it has on education is being challenged at the grass-roots level. Teachers across the country are standing up to the standardized testing system and parents are opting out of it: They're refusing to let their 8- to -13-year-olds take these "high stakes" tests that so many jobs and so much money rides on. And this movement, small as it is, has become news.

The Riverhead (N.Y.) News-Review, for instance, reported last week that "parents and educators statewide continue to protest so-called high-stakes testing tied to the controversial Common Core State Standards," with the parents of 118 students in grades 3 through 8, in the Shoreham-Wading River school district, on Long Island, saying "their children will not sit" for the English and math tests in April and May, up from 25 who opted out last year.

And Gina Bellafante, writing recently in The , noted: "The most significant aspect of this wave of testing dissent is its expansion beyond the world of affluent white parents and celebrated schools, where children are largely destined to succeed. On Thursday, parents in Harlem gathered to announce their displeasure with a system that has forsaken meaningful education for a culture of obsessive examination. More than 100 families at , an elementary school where 80 percent of students receive free lunch, had sent letters alerting the principal that their children would decline to take the tests."

What's so wrong with standardized testing that a movement is rising up against it? A number of complaints come up again and again. The most egregious and overwhelming, from my point of view, is that such testing fails to measure what it claims to measure, often by a long shot, but nevertheless inevitably produces scores gauging the knowledge level of every student taking it, which, when below preset standards, are used in a punitive fashion against both teacher and school, denying them jobs and funding.

Furthermore, a great deal of time and effort go into the preparation for and administration of the tests, thus stealing time from other subjects -- even in classes where the students aren't being tested. One mother, for instance, quoted in a report on Pittsburgh TV station WTAE said that her daughter, a first-grader, "may be too young to take the tests, but she's losing class time because her teachers are helping to administer them to other students." Inevitably what disappears from classrooms is focus on the arts and other "soft" subjects, mastery of which, of course, hardly lends itself to simplistic measurement.

Many parents complain about the stress their kids are placed under to participate in these high-stakes tests, which play such a role in the fate of teacher, school and district: absurd, joy-choking stress it hardly makes sense to require young children to endure. Added to that is a fear of test-taking that many students already have, which high-stakes testing only aggravates. Such factors throw the validity of the statistics the tests produce into serious question.

Other factors also sully these stats, which have such power to wreak havoc in our schools. From the website Change the Stakes: "State exams are loaded with poorly written, ambiguous questions. A recent statement signed by 545 New York State principals noted that many teachers and principals could not agree on the correct answers."

Diane Ravitch makes the point that the tests give no useful feedback to teachers about what the students actually know. "They have no diagnostic value," she writes on her website. "The test asks questions that may cover concepts that were never introduced in class. The test is multiple-choice, creating an unrealistic expectation that all questions have only one right answer."

And, eerily: "High-stakes testing undermines teacher collaboration," the Change the Stakes website points out. "Teachers are judged on a curve, which discourages them from helping students in another teacher's class."

The simplest, most plaintive complaint of all is that these tests take the joy out of learning. They mock the craft and complexity of teaching at the same time that they hold schools and teachers responsible for all the unaddressed socioeconomic impediments to learning that plague our society. In the movement to counter standardized testing, the stakes are high indeed.