Changes to SAT will Even Out Playing Field 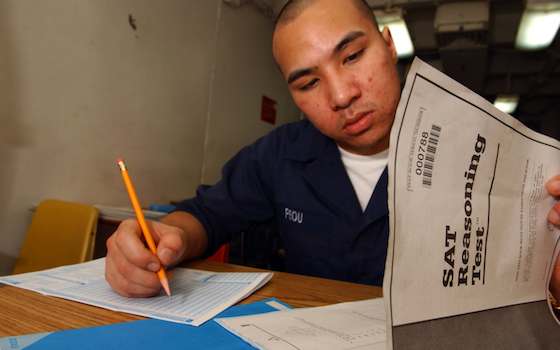 Changes to SAT will Even Out Playing Field

The College Board, which administers the Scholastic Aptitude Test, the once pre-eminent college entrance exam, has announced several major changes to the exam and the way it is scored. Which of the following statements describes its motivation?

A. It's a crafty move to shore up flagging market share. The rival ACT has overtaken the SAT in number of test-takers in recent years.

B. It is trying to align with the Common Core set of curriculum standards, adopted in all but a few states, which is changing education as we've known it.

C. The College Board is finally acknowledging that its test is being gamed by well-off parents who pay nearly $1 billion every year to give their children a better chance at college admission, and that is not really fair.

D. The SAT needs to do a better job of assessing how well students can think, reason and solve problems.

If you answered E, congratulations. You don't have to take the essay portion of this test.

This move by the College Board is unambiguously a step in the right direction. The changes to the test, which will affect students in spring 2016, indicate a broader understanding of the challenges and needs of American education today and going forward. The question is whether any test can accurately test college readiness without penalizing poorer students.

Gone is the essay portion of the test, unless a student wishes to take that portion as an extra. No longer are points taken away for wrong answers, which led to students weighing which questions were skipped instead of plowing forward on the timed test. Calculators will be allowed only on parts of the test, not throughout.

Unusual words like "sagacious," not likely to be found in most college studies, have been culled; other 50-cent words, like "synthesis," which students will encounter in their studies, will remain. The test will seek to more closely match the knowledge sets that students in virtually every state in the nation will be studying.

Again, these changes will help to level what has been a tilted playing field.

Predicting human potential has never been what you would call a science. But college admissions tests have long proclaimed to be just that: impartial, statistical tools to help discern the best prepared students from a stack of applicants.

Not surprisingly, however, an industry grew around the tests, promising an edge to the student who ponied up for pricey tutorials. Also not surprisingly, higher scores on the SAT began to increasingly correlate with income. It became hard to ignore that too many high scorers were gaining their edge, and perhaps their seat in the freshman class, by virtue of their parent's wealth rather than their own hard work in school.

Here is how College Board President David Coleman framed it in interviews after the changes were announced, "These patterns of access, if allowed to continue, will build an iron wall of inequality into the next generation."

If all we are doing is drawing from not necessarily the smartest pool of talent for our colleges and universities but merely from the most privileged, we all will suffer. The country can't afford to needlessly screen out students who have great potential, but who haven't been coached to achieve a high score on these critical tests.

It's also important to do a better job of assessing how well students apply higher order thinking skills, not simply how well they take tests. Can they reason, analyze, form coherent arguments and solve problems?

That's part of the goal of Common Core too. Coleman had a role in pushing Common Core, which has been adopted by 45 states. It makes senses to align the SAT test to measure if those standards have been met. The ACT had already moved in that direction, part of the reason it has flourished, with 1.8 million students taking it in 2012.

Does this mean that the SAT will no longer give a leg up to those with social or economic advantages? Of course not. The tweaks to the test, and new online prep courses that will be offered to all free of charge, cannot possibly make up for a kid who didn't benefit from soaking up the vocabulary and savoir-faire of college-educated parents, from summer camps, from vacations that opened his or her eyes to the broader world, and so forth.

Still, the smallest lift, an edge not normally there, can have great impact when paired with a young person's innate intelligence, drive and motivation.

Grit counts for a lot. An intelligent child with grit can take a tiny edge offered and run with it.

But we have to offer it.

"Changes to SAT will Even Out Playing Field"