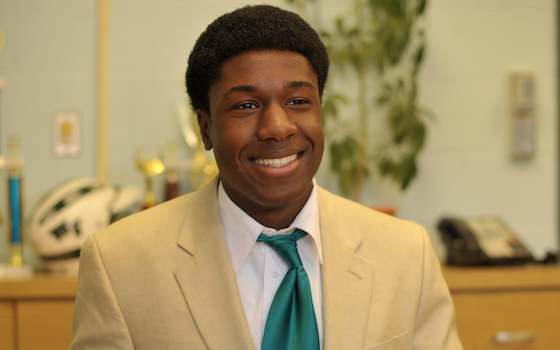 Congratulations, Kwasi Enin. You're a 17-year-old Long Island high school student who applied to all eight of the nation's elite Ivy League universities -- and received acceptance letters from all of them!

For this astounding feat, you now get to be pilloried where no good deed goes unpunished, on the Internet.

That's an unfortunate part of the price one pays for being both black and bright in the age of affirmative action.

As one of the more printable responses posted on Reddit put it, "With better credentials than the guy in the article my white fiance only got into two Ivy schools, and I only got into 1 Ivy with similar scores. 2,250 (Enin's SAT score) is not that great, and frankly I think that this kid is going to have a hard time keeping up if he goes to a school like Yale."

We'll see. In fact, Enin hardly sounds like an academic slacker. His SAT score of 2,250 out of a possible 2,400 puts him in the 99th percentile for college-bound African-American seniors nationwide, according to the SAT's website, and the 98th percentile of all college-bound seniors.

"Hell, I'm an Asian-American who got 2210 on my SAT," wrote one of Enin's defenders, Princeton student Benjamin Dinovelli, in The Daily Princetonian. "Despite the 40-point difference, my acceptance was not littered with shocks of surprise or comments from others about how I did not 'deserve' to get in."

Enin also ranks 11th -- well within the top 2 percent -- of his class of 647 at William Floyd High School, a large public school in Long Island, according to the New York Daily News, which first reported his story.

But SAT scores and class rankings are only the beginning of the admissions process at elite colleges these days, not the final arbiter. Since applicants to the Ivies are like Garrison Keillor describes the children of Lake Wobegon, all above average, admission becomes what candid academicians describe as a crap shoot.

It is not for nothing that the Ivies are called exclusive. Acceptance rates range from a mere 14 percent at Cornell to an even more meager 5.9 percent at Harvard.

Faced with a flood of 98th- and 99th-percentile achievers in test scores, admissions officers put a premium on other factors, including racial and ethnic diversity. Exclusivity has its advantages, but no college these days wants to be perceived as too white.

By that standard, race would be an obvious plus-factor for Enin, but not his only one. He also is a shot putter who sings in his school's a capella group, plays the viola and volunteers at Stony Brook University Hospital. He's also on track to complete an impressive eleven college-level Advanced Placement courses by the time he graduates.

After all of that good-faith effort on his part, I am less troubled by how much race might have weighed in Enin's favor than I am relieved by how little it appears to have weighed against him.

What all of us Americans should find troubling is not Kwasi Enin's historic achievement but the larger questions it raises about why we don't have more high-achieving blacks and Latinos in the education pipeline, so race wouldn't have to be a plus-factor.

In that regard, both sides of the college admissions debate are missing what may be the most significant aspect of Enin's success: He's a child of immigrants. His parents are nurses who emigrated from Ghana, studied at public colleges here and reportedly stressed the value of education to their son from an early age.

Similar cases help to explain a startling development that Harvard professors Lani Guinier and Henry Louis Gates, Jr., reported 10 years ago to a black Harvard alumni gathering: As many as two-thirds of Harvard's black undergraduates were West Indian and African immigrants or their children or, to a lesser extent, children of biracial couples.

Americans are reluctant to talk about culture for fear of raising suspicions of racism. But, as Yale professors Amy Chua (of "Tiger Mom" fame) and Jed Rubenfeld argue in their new book "The Triple Package," we have a lot to learn from how some cultural groups succeed better than others -- within every race.