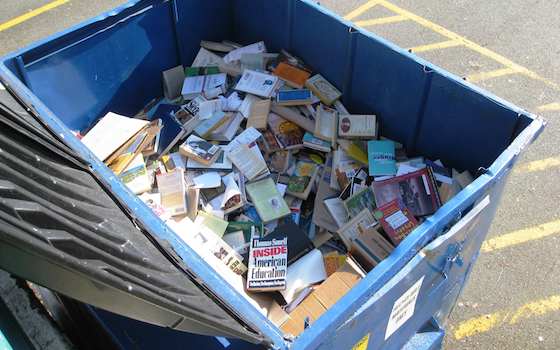 "The standards are designed to be robust and relevant to the real world, reflecting the knowledge and skills that our young people need for success in college and careers. With American students fully prepared for the future, our communities will be best positioned to compete successfully in the global economy."

This is how we talk about learning, growth and the human future?

Things are getting worse in the American classroom, not better. The experts and the special interests purporting to fix the educational system are continuing, instead, to asphyxiate it.

The grandiose quote, above, in which "our young people" show up as abstractions needing to be prepped for some simplistic, highly competitive imaginary future (fully understood by the experts), is part of the mission statement of the Common Core State Standards Initiative, the Obama administration's showcase education reform initiative.

Just like the disastrous No Child Left Behind Act of the Bush era, in whose wake it follows, it's all about testing and uniform standards and the "rigorous" evaluation of schools and teachers; and it's clueless about the nature of childhood development, not to mention reality. Its primary mission, as with NCLB, is to pull education out of the hands and hearts of teachers and turn its administration over to politicians and their corporate sponsors. It both defunds and belittles the learning process.

And the primary metaphor for school remains "the pipeline" -- either the cradle-to-prison pipeline, which is what education amounts to for so many young people in poverty-stricken neighborhoods, or the cradle-to-career pipeline, as Education Secretary would have it.

It's not that the pipeline is broken. Rather, as educator put it in a brilliant piece of graphic commentary published at Truthout, "the metaphor is broken" -- the metaphor of the public schools as an industrial sluiceway, washing our children anywhere at all.

An educational system that fails to revere children and honor their potential -- that turns schools into 3R boot camps, demanding the regurgitation of specified data on command, but shrugs off the importance of holistic thinking or simply learning to think for oneself -- is insane at its core. Welcome to the 21st century!

While the educational process has always been hierarchical and right-answer-oriented, things have only gotten worse over the last several decades. Now, with the Common Core State Standards Initiative, which defines and scripts the lessons to be taught, the micromanagement of teaching -- and learning -- has reached a new extreme.

"Teachers are not allowed to use their own methods to introduce the material, manage the classroom, or share their own wisdom," wrote last month at , describing this process. "Students are not encouraged to connect the material to their own lives, events in the world, or things that may interest them. The script tells the teachers and students, at all times, what to say and do."

Such scripts, Tampio wrote, "suck the oxygen out of a classroom."

And longtime teacher wrote last week in the : "Pushback against a system now abusing the young and wasting their potential is decades overdue. Teachers need autonomy, freedom to experiment, and opportunities for meaningful dialogue with each other and the communities they serve that they don't now have."

Uniform, scripted educational standards -- especially combined with the ongoing defunding of our schools -- are not going to implant "the knowledge and skills that our young people need for success in college and careers," let alone allow them to manifest their extraordinary potential in ways we can't begin to imagine. They're more likely to shut down the future altogether.

, writing for the Rethinking Schools website in January, noted that No Child Left Behind "was a failure in raising academic performance and narrowing gaps in opportunity and outcomes. But by very publicly measuring the test results against arbitrary benchmarks that no real schools have ever met, NCLB succeeded in creating a narrative of failure that shaped a decade of attempts to 'fix' schools while blaming those who work in them. The disaggregated scores put the spotlight on gaps among student groups, but the law used these gaps to label schools as failures without providing the resources or supports needed to eliminate them."

And, he added, speaking of the Obama initiative, "The problem is that this game, like the last one, is rigged."

Karp's concept of "a narrative of failure" reminded me of my own years as a parent ushering a child through the educational system, twenty-some years ago. By then, testing mania had already taken serious hold of the process, throwing it absurdly out of whack. When my daughter was in the third grade, she started taking standardized tests, which meant that her teacher, otherwise a wonderfully creative woman, was forced to teach to the test, which purported to measure writing skills, among other things.

Writing, which should summon forth a universe of wonder from kids, was reduced to five-paragraph slabs of dead prose, which could be "measured": opening paragraph, conclusion, etc. My daughter started to hate writing, and one day the teacher lamented to me that she was having trouble getting the students to . . . indent their paragraphs, which was necessary in order to succeed on the standardized test.

I listened dumbfounded, unable to imagine anything less relevant or more extraneous to the writing process. The only thing happening here was the creation of a new form of failure. At the time, I didn't know what to say. Maybe I should have rushed into the room and opened a window. Those trapped inside clearly needed oxygen.