The ABC's of School Choice 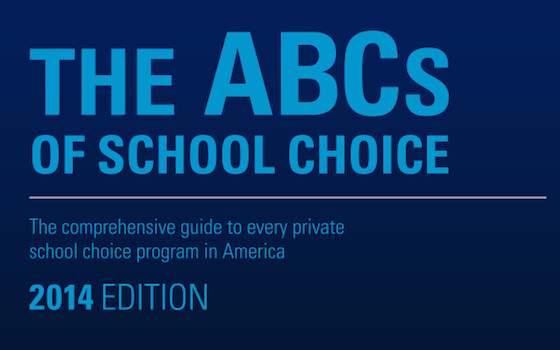 The ABC's of School Choice

When people speak of a legacy, they usually mean something other than what the late economist Milton Friedman and his wife, Rose, left behind, namely the (edchoice.org).

The foundation has just released a small book entitled "The ABC’s of School Choice: The comprehensive guide to every private school choice program in America."

The Friedman philosophy can be summed up in two sentences, which are posted on their web page: "School choice gives parents the freedom to choose their children's education, while encouraging healthy competition among schools to better serve families' needs. School choice lets parents use the public funds set aside for their children's education to choose the schools -- public or private, near or far, religious or secular -- that work best for them."

Choice, competition and what works best for them, not what works for unions and school administrators. Choice and competition work in business, politics and virtually every other area of life, but not in the monopolistic public education monstrosity where the lack of same limit educational achievement for many and often rob children of a brighter future.

One other benefit to school choice was mentioned in a column written by Dr. Friedman on for . About school voucher programs, Dr. Friedman said: "They also demonstrate the inefficiency of government schools by providing a superior education at less than half the per pupil cost."

On more than one occasion Dr. Friedman has noted that modern public education remains based on a 19th-century model with children from different backgrounds brought together into a single melting pot. That doesn't work in the 21st century. In column, Dr. Friedman wrote, "Free market competition can do for education what it has already done for other areas, such as agriculture, transportation, power, communication and most recently, computers and the Internet. Only a truly competitive educational industry can empower the ultimate consumers of educational services -- parents and their children."

The only counter arguments to this are based on everything besides what benefits the children.

In the " of School Choice" is listed the state of education choice from Alabama to Wisconsin. It's a mixed bag with some states offering vouchers and others alternatives such as Education Savings Accounts, tax-credit scholarships and individual tax credits/deductions.

These would be used at a parent's discretion for private schools -- secular or religious, charter public schools, homeschooling, or online learning.

While Dr. Friedman acknowledged that school choice would benefit poor and minority students, he maintained that all boats would be raised because competition would force every school -- public and private -- to compete for "customers." When businesses compete for customers the quality of their products must improve in order for them to stay in business. Not so with the public school monopoly that gets taxpayer money with few requirements, except in a few states, that they improve their product.

Various studies have shown there is little difference so far between public and alternative schools when it comes to test scores, but these studies acknowledge that testing alone is not the only standard by which education success can be measured.

According to a 2006 report by the , which studied the , "Black students were twice as likely as others to apply for an alternative school under one of four programs. And test scores were not the primary factor in influencing the decision to try an alternative school. Overall, the choice programs in San Diego are increasing the integration of whites and nonwhites, and decreasing very mildly the integration of students with low and high test scores."

Minority parents have shown strong interest in transferring their children from failing public schools into schools that are safer and the academics stronger.

"The ABC's of School Choice"