Remembering 9/11: Unity Is Just a Memory 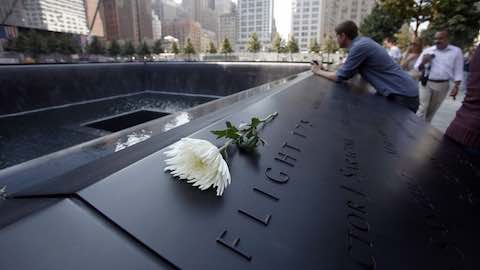 Remembering 9/11: Unity Is Just a Memory

In response to its horrors, September 11 brought a reassuring surge in national pride and self-sacrifice. Unfortunately, our national unity faded for a number of well-known reasons

If we had another terrorist attack like , would sing "God Bless America" on the Capitol steps like they did in 2001? Or would too many lawmakers be too busy drawing up articles of impeachment against President ?

That question came to mind as announced plans to reunite on the Capitol steps for an encore homage.

It's all part of a weekend of observances in , at the Pentagon in , and at the crash site of United Airlines Flight 93 near

It is widely believed that the jetliner was headed for the U.S. Capitol after being hijacked by terrorists, House Speaker noted in a statement, were it not for "the heroes on board United 93, who challenged the hijackers and forced them to abandon their plan."

Thanks for the memories. In response to its horrors, brought a reassuring surge in national pride and self-sacrifice. Young people signed up for the military, knowing they most likely would be going to war. Putting faith in their leaders, a new generation of American fighters was ready to stand tall -- and together.

Nothing concentrates the mind, I reflected at the time, like the knowledge that somebody's out to kill you simply for being American.

A "new normal" settled in. Civilian vigilance and courage back home paid off in the foiled efforts of the "shoe bomber" and the would-be "underwear bomber" Umar Farouk Abdulmutallab. Such heroic stories should humble all of us, especially our president and other lawmakers as they grapple with the various crises that face our country today.

I'd like to think that, for all their Obama vs. bickering, our lawmakers and the rest of the nation can put aside partisan differences as quickly as we did when al-Qaida struck us a decade ago.

Unfortunately, our national unity faded for a number of well-known reasons. The goals and strategies of Bush's "global war on terror" became less clear and more questionable. Voices on the right and left increasingly questioned the government's new intrusions on privacy allowed by the hastily passed PATRIOT Act. The war, launched to overthrow the Taliban and break up al-Qaida, became a murky exercise in nation building.

The last of the administration's post-9/11 political capital was spent on a shift of our forces to a new war against , despite a lack of evidence linking him to .

Today, political cooperation in is in a shambles, as politicians and activists squabble over the most divisive issues left over from the Bush years: jobs, taxes and the economy. The recession that helped elect Obama has since become his biggest burden. A sluggish recovery and the looming threat of a second dip into recession are made worse by a collapse of consumer and employer confidence.

Polls reveal a public taking out its rage on the usual suspects: whoever is now holding office, including President Obama. More than 60 percent of those asked in a new poll disapprove of his handling of the economy, job creation and the federal budget deficit.

His high marks? More than 60 percent approve of his success against the threat of terrorism. The killing of by Seal Team Six under his command undoubtedly helped. Unfortunately, a good terrorism-fighting reputation doesn't carry the weight it did a decade ago. Just ask failed Republican presidential candidate .

Obama's meager consolation: He doesn't look much worse than his opponents. He still polled a couple of points better in the survey than the job performance of Republicans in . He fell below a "generic Republican" opponent in the new poll, but still runs about even against real ones like and . Even so, Obama had better watch out for that "generic" candidate, whoever it is.