Remembering 9/11: The Day That Changed Us 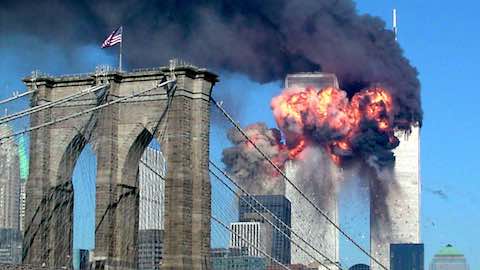 Remembering 9/11: The Day That Changed Us

You wish the years was some sort of magic release date, that the murdered souls of 9/11 could return, their suffering ended, their incinerated bodies recreated from the dusty air of lower Manhattan and the rubble of the Pentagon and the muddy earth of a Pennsylvania field. Nearly 3,000 of them. We cannot change that. But it can change us

They are dead. He is dead. We are alive. We are changed.

You wish this anniversary could change that. You wish that the murdered souls of could return, their suffering ended, their incinerated bodies recreated from the dusty air of lower and the rubble of the Pentagon and the muddy earth of a field, allowed to pick up their lives wherever they were headed that morning, to the office, to the subway, to breakfast, to another city.

They are dead. That will never happen. Their children are teenagers now. Their teens are adults. They exist only in memories, in family stories, in photo albums and attic boxes and troubled dreams.

No roll call today will bring them back -- not even one read by presidents and governors. No etching of their names in a memorial will reanimate them. They stand as the fallen.

Not a single one was a target that Tuesday morning. Yet all of them were victims. It remains the most maddening fact of all, the randomness of terror, the idea that killing for the sake of killing ever could be viewed as a worthy cause.

They are dead. Nearly 3,000 of them. We cannot change that. But it can change us.

Is there any denying that?

Osama bin Laden, years after the mass murders he helped orchestrate, has himself been hunted down and killed, dumped in the ocean with a bullet through his head, no marker, no gravesite, no mourners on hand. His end, unlike many he slaughtered, was not heroic. It was not memorable. He did not go out trying to save anyone but himself.

Even death -- which he often predicted would prove his salvation -- came to him in a dark, hidden place.

He lived in shadows.

He died that way.

He was remorseless and evil, some say the devil himself, but even the devil serves a purpose, if only to know how not to live your life. In the decade since he gloated over airplanes that killed thousands -- including 19 of his own that he willingly sent to slaughter -- bin Laden went from an uncatchable Satan to a pathetic desperado, making scratchy recordings to bolster his relevance, seeing his efforts to convert even fellow Arabs to his dogma thwarted and rejected.

In the end, he never again masterminded anything close to . His last images were of a pampered man bunkered in a compound, with self-serving videotapes and a large stash of pornography. Hardly the accoutrements of a prophet.

He is dead. He haunts no more. A 10-year anniversary with bin Laden free would be a different day than the one we will experience today. But we swore we would get him and we made sure that happened. He once predicted, in an interview with Al-Jazeera, that "the U.S. government will lead the American people ... into an unbearable hell."

Yet he is dead.

And perhaps there himself.

All of us who wondered, "What if it happens again?" All of us who ever looked nervously out an airplane window, or eyeballed a suspicious passenger, or hesitated to enter a sold-out stadium, or woke up on previous anniversaries panicked that the streets, the buildings or the skies themselves would not be safe -- we are still here.

Not in a decade.

We are alive. There's a reason for that. Either the enemy is less powerful and organized than our fears, or the numerous precautions we have (sometimes unpopularly) adopted are effective, or terrorism on a grand scale doesn't follow a 10-year timeline -- you can have two attacks in six months and not another for two decades -- or we are just plain lucky.

But we are alive. We have learned to live with threat and shadow. We rise. We laugh. We work. We shop. Those who remember the financial markets, the dire predictions, the prevailing sense of doom that covered the fall of 2001 must admit how quickly the nation bounced back in many ways.

There is no more precious sentence.

It is foolish -- even insulting -- to think we have circled back to the day before the attacks. Too many wars fought. Too much hate exchanged. Too much fear. Too much disruption in our daily lives.

Think only of a trip to the airport on . You kept your pockets full and your shoes on. You packed toiletries, computers and scissors without concern. You drank a Coke while wearing a hat as you walked through a security screening that was, at best, perfunctory. You could drive onto a tarmac. You could bring your family to the gate to say good-bye.

We are changed. Pat-downs are a way of life. Locked doors. Mandatory IDs. Allow two hours. Stand on endless lines. The clogging of our daily activities done strictly for security is immeasurable. And there is no going back.

We are changed. Our tempers are shorter. Our anger is at a quicker boil. Our relations with Arabs and Muslims -- here and abroad -- have been bruised and battered and both sides fight distrust while working toward a new calm.

We are changed in how we view patriotism -- some are sick of the word, some think it is the only word that matters. But few can say it means no more today than it did the day before those towers started burning.

What we tolerate. What we expect. Is there anyone who feels as free and easy in this century as we remember feeling in the last? Doesn't watching the news always seem to carry some ominous backdrop? Aren't our nerves more hair-trigger now -- when we hear of an explosion, a car bomb, white powder in a letter or hidden gas somewhere in a subway.

We are changed. And yet, when we need to be, we are the same. There may be a different president, a different economy, today may even be a season-opening football Sunday (almost a national holiday, that one) but at churches and barbecues and monuments and rallies, when those images are rebroadcast and those names are recited and the plumes of smoke and the crumbling skyscrapers and the tapes of those brave passengers ("Let's roll!") are laid in front of us, we will be right back to where we were 10 years ago today, one nation, under God, crying our eyes out -- and then drying those tears in deference to 9/11's final lesson: that life and love does, and always will, go on.