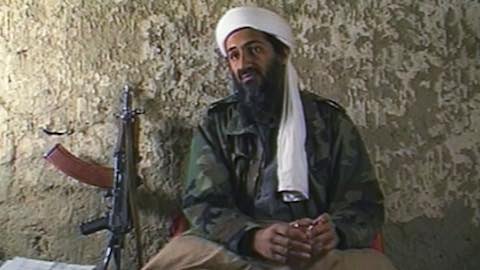 Osama bin Laden, were he not at the bottom of the sea, could be reasonably satisfied with what he has accomplished

He has not forced the United States to pull its troops out of the Islamic states. Quite the opposite. There are hundreds of thousands more there now than in 2001, in Yemen, Bahrain, Iraq and Afghanistan, and present indications suggest that they may not leave until driven out -- which could happen.

Eventually, it will happen, notwithstanding current official strategy documents, which envisage American efforts of unlimited duration to remake the area's nations "on the American model" as wrote in in 2008.

But he did get them out of his own country, Saudi Arabia.

Withdrawing the American air bases from Saudi Arabia was one of the first military-political measures to follow the U.S. invasion of Iraq in 2003. The Saudi government had been asking for the withdrawal of the bases, which were considered politically damaging to Saudi rule, ever since the end of the Gulf War in 1991, for which they originally were deployed. The Saudis had been saying "please," but the Pentagon apparently believed that it was convenient to have the bases there indefinitely (or permanently) and ignored Saudi nagging. It took the destruction of the World Trade Center and the attack on the Pentagon to get Washington's attention. There is an old Southern story about what's necessary to get the attention of a mule, and no doubt there is an equivalent story in Arabia.

The attacks were meant to punish the American government for its policies. The first provocation for the attack was the U.S. force stationed in Saudi Arabia. The second was one about which Americans who have public careers, and especially Washington careers, prefer not to talk about. It was, and is, American acquiescence in and support for Israel's continuing annexation of territories assigned by in 1948 to compose a new, independent Palestinian state.

The state was to be created from the mandated territories in Palestine, in parallel with the creation of what had been decided would become a Jewish national home. This division of Mandate Palestine, as everyone knows, has been a source of deadly conflict between Jews and Arabs ever since, and no doubt will continue to be one even after the Palestinians petition the U.N. later this month to enforce the terms of the 1948 U.N. ruling.

The third provocation was the American role in the 1991 Gulf War to liberate Kuwait from Iraq, which outraged many, although not all, Arabs. Those U.S. troops in Saudi Arabia were the consequence of that war. Finally was the American recruitment, with the help of , among others, of thousands of young Arabs to fight the 1979-1991 Soviet occupation of Afghanistan. Once that struggle was over, the U.S. dropped its support for those Mujahedeen. That left a lot of trained, armed, angry, unemployed young men in the Middle East, with free-floating grievances, the main one being American interference in the affairs of the Muslim world.

In retaliation, -- without planning to do this specifically; he meant to attack symbols of American capitalism and militarism -- delivered a terrible blow to what may be called the American nation's soul.

The nation was then at peace with itself, complacently so, after the Gulf War victory's easy confirmation of its global preeminence, and the collapse of communism in Russia and Eastern Europe, and effectively, in China. Americans felt very good about themselves.

They had reason for that, aside from their evident power. They had no doubts about their national virtues, or about what it saw as the promise of America's future as a model for a democratic world.

Try to imagine what might have been had bin Laden not struck New York and Washington. would probably have been re-elected, as happened, but as a likable, swaggering but genial, compassionate conservative (whatever that would have meant to a mainstream Republican in our day), leading a country whose business has always been business. He would not have been transmogrified into The Decider, with the sinister and lawless privatizing and industrializing unlimited wars of trillion-dollar cost, mustering obscene brigades of torturers and mercenary legions of morally lost adventurers, a creator of millions of ruined lives -- while thousands of Americans cheered.

Nations are like men in that they reveal their true character under stress. The worst thing did to the United States was to force us to reveal too much about our true character. It will be written down as his terrible vengeance upon us.