Did September 11th Weaken or Strengthen the United States? 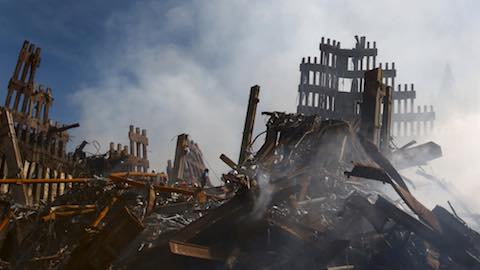 Years ago, the loss to America was immediate, the stock market closed down and then lost great value, and for a while the infrastructure system closed down. Many foreigners thought it served the arrogant American Empire right; across the Arab world, including in supposedly pro-U.S. nations, there was rejoicing on the streets. Surely, then, America had been weakened?

On September 11, 2001 a well-coordinated terrorist plot led to the assault upon the United States by four of its own (captured) civilian airlines, with disastrous loss of human life. The worst of all this was the destruction of the World Trade Towers in south Manhattan, where nearly 3,000 innocent people were killed. The loss to America was immediate, the stock market closed down and then lost great value, and for a while the infrastructure system closed down. The world watched in awe, and many foreigners thought it served the arrogant American Empire right; across the Arab world, including in supposedly pro-U.S. nations, there was rejoicing on the streets. Surely, then, America had been weakened?

But the response of the American government was fast, decisive and, in a calculated way, quite brutal. The attackers were known to be the terrorist al-Qaeda organization, it was known that they were housed by the Taliban in hidden places in Afghanistan, and it was known how to project American air and military power into the mountains of Southwest Asia and crush the greater part of al-Qaeda; hunting down Osama bin Laden was a matter of time. Two years later, in 2003, massive American forces (with a few Allies) poured into Iraq for a second time in recent memory and eradicated Saddam Hussein and his unpleasant regime. This time, the world stood aghast for a different reason: the blunt display of America's military might, and thus the possibility that the United States had gone as far ahead in "hard power" measures compared to other powers (Russia, India, China, Europe) as the Romans had vis-à-vis the barbarian tribes 2,000 years earlier. Russian nationalists, French intellectuals and Chinese planners were all upset, which probably made American hawks like Vice President Dick Cheney and Defense Secretary Donald Rumsfeld doubly happy. The United States was back on top!

But was it? And, even if it had displayed an impressive amount of military muscle, how long would that last? And of what deeper value was it, for the preservation of America's long-term power position? Over the years that followed the epic events of 2001 and 2003, the ground wars in Iraq and especially in Afghanistan became more protracted, more bloody and ever less clear for the American public to understand. I cannot do the sophisticated polling that the Pew Foundation expert pollsters do, and the Pew polls show Americans nowadays much more uncertain about their post-9/11 position than they apparently were 10 years ago, but when I talk with the folks at my local hardware store or Italian deli, I hear no Cheney-like pride or aggressiveness. There is a feeling that these wars abroad have lasted too long and aren't going anywhere, and an even stronger feeling that the White House and Congress should cease bickering and focus all their attention upon America's undoubted domestic ills.

Is isolationism in evidence at my hardware store and deli? You bet it is. Nobody talks much here about the rise of China -- only intellectuals and the war colleges do that. Nobody cares about Putin's Russia. Latin America (amazingly) and Africa, apart from helping starving babies, are off the mental map. India is marginally on the map. The Middle East is just full of stupidities -- why can't we just get out? And the situation in Israel is, to most Americans though obviously not to AIPAC and other pro-Jewish lobbies, just an embarrassment. Europe is, except for college students planning an exchange program, not a place of interest; nobody knew of Dominique Strauss-Kahn until he was hauled off the first-class Air France plane. If asked "which foreign country would you fight for," the largest number of those polled would say "the Brits," but that is because those polled feel that the United Kingdom is the only country that has fought alongside America in a world in which the superpower feels increasingly lonely and sick of overextending itself. To the average American, few other countries are worth fighting for. The administration may disagree, but it does take notice of this changed sentiment.

When the actual day of the 10th anniversary occurs, the ceremonials arranged by the White House will be sensitive, intelligent, suitable; how could they not be? And it will be proper to respect what President Obama is trying to do, and to respect American emotions. These events will undoubtedly attract all the chatter of the absurdly short-term media in this country, eager for instant coverage and unintelligent commentary. But Obama will strive to be above that.

But what of those of us who are attempting to step back from these memorializations and ask questions about where America is in the world right now as compared with a decade ago? Has the United States been weakened, or strengthened? How has its world policy been affected, in the largest sense?

And perhaps the real answer to that critical last question might be this: that the largest effect of 9/11 upon America is that it became distracted. Distracted in two very important ways: in the first place, it was distracted from many other things that are going on in the world; and, secondly, distracted from the erosion of its financial strength and international commercial competitiveness.

Let us look at the first matter, albeit very briefly. In its own hemisphere -- surely among the most important areas in the world to U.S. interests -- a new Latin America is emerging, unsteadily but observably. There is human catastrophe in Haiti, an uncertain future for Cuba, the continued idiocies of a sick Chavez regime in Venezuela, and drug-gangster wars from Bolivia to Mexico. Yet there is also the extraordinary transformation of Brazil, the success of Chile, and the quiet recovery of Argentina. But does the United States have a positive, carefully crafted strategy for Latin America? Of course not. Africa, apart from a few lights of promise, trembles over the pit of environmental and demographic disaster; but Washington leaves that problem to The World Bank. Europe fades further away. Russia is neglected. An India-Pakistan policy is, well, hard to describe. And American views on China range from blind enthusiasm to calls to build up the U.S. Navy immediately. And all this neglect for adventures in Afghanistan and Iraq that are now being wound down. This will be hard to explain to history students in 50 years' time.

Even more worrying has been a decade of distraction from attending the "Common Wealth" -- that is, the "Common Good" of America itself and of its citizenry. The Bush administration's combination of expensive foreign wars and inexcusable tax cuts that favored the rich has had dreadful effects upon U.S. federal deficits, upon America's growing dependency upon foreigners, and upon the long-term future of the dollar. The social fabric is fraying, the underclass is growing -- it is observable year upon year in the soup kitchen where I work -- and the public-school system crumbling. Under-investment in our roads and railways and power systems is visible every day. And, as if any more bad news was needed, along comes a Tea Party with policies that would make America's double-distraction even worse.

This, then, may be the real legacy of 9/11, long after U.S. troops are withdrawn from those high Hindu Kush ranges. For here was the decade when America turned its attention away from its own domestic condition and from its need to have a wider view of global change.

Paul Kennedy is Dilworth Professor of History and director of International Security Studies at Yale University.