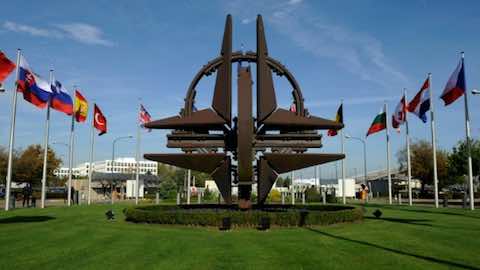 The attacks on America gave the values-based alliance a renewed relevance in a post-Cold War world. But over time, the issues surrounding the global struggle against terrorism have also added new layers of complexity and raised new questions about the alliance's future

Meeting at the alliance headquarters in Brussels just hours after planes struck the World Trade Center on Sept. 11, 2001, Nick Burns, then U.S. ambassador to the North Atlantic Treaty Organization , thought he would have to do some convincing to get the rest of the NATO member countries to come to America's defense. But rather than show any hesitation, he says, America's allies immediately volunteered their support, even before the casualty counts had become clear. "It was a great moment of alliance solidarity on a very tragic day," Burns, who's now an international relations professor at Harvard's Kennedy School of Government, recalls.

All at once, the original purpose of NATO was both revived and demonstrated to be outdated. Indeed, in the immediate term, the attacks on America gave the values-based alliance a renewed relevance in a post-Cold War world. But over the intervening decade, the issues surrounding the global struggle against terrorism have also added new layers of complexity and raised new questions about the alliance's future.

On Sept. 12, 2001, as an act of solidarity with Americans after the previous day's catastrophe, the allies invoked Article 5 -- the binding promise of the group's mutual defense -- for the first time in history. Originally designed with Russia in mind, Article 5 says that for all member states, "an armed attack against one or more of them in Europe or North America shall be considered an attack against them all." The countries stood by the United States with a sense of urgency and energy. "The expectation was for 50 years that it would be the United States that would have to rush to the defense of Europe in the event of a war against the Soviet Union, and the irony was that the only time we had ever invoked Article 5 was that next day, and it was for the Europeans to rush to defend the United States," Burns says.

As the realities set in, it soon became clear that the gesture had opened NATO up to an entirely different set of challenges than most had previously considered. For one, the enemy was not a country, but a group of non-state actors, al Qaeda. Also, the threat of terror gave NATO countries, whose united cause had been based on the notion of protecting a geographic location, a new function. They could no longer just defend their own territory; to fight against terrorists, they'd have to go far beyond. "This was NATO's natural progression after 9/11," says Burns. "It became very clear to us that while Europe was largely peaceful and secure, the interests of the NATO members were being directly affected by terrorism [and] what became the wars in Afghanistan and Iraq. So, it became very clear that NATO had to go well outside of its natural geographic area because the interests of our members were being threatened."

The threat of terrorism was at that moment, more than ever, seen as a global issue that couldn't be fought successfully by one country alone. Cooperation, whether through NATO, the United Nations, or more ad hoc partnerships, was essential. "We live in this age when all of the really interesting security challenges are too big for one state to deal with alone," says Jeff Lewis, director of the East Asia Nonproliferation Program at the Center for Nonproliferation Studies at the Monterrey Institute of International Studies. "So, you have to have cooperation, and alliances are a major point of cooperation."

Even just a month after the World Trade Center and Pentagon attacks, news reports reflected hopeful sentiments that the tragedy could be a chance for rejuvenation for NATO, the decline of which had been a common global talking point through the previous decade. But as the United States began its campaign against terrorists in Afghanistan in October 2001, Americans led by President George W. Bush initially seemed to rebuff NATO's efforts and take things into their own hands, says Stewart Patrick, director of the International Institutions and Global Governance Program at the Council on Foreign Relations. That changed in 2003, he says, after the United States also decided to invade Iraq. "It was only later that, and partly because the U.S. was feeling spread pretty thin after the invasion of Iraq, that the United States really became open to the notion of NATO taking over ISAF, or the International Security Assistance Force, in Afghanistan," Patrick says.

Afghanistan was the first test for NATO's new role as an expeditionary power.

Though the alliance had been involved in Bosnia and Kosovo in the 1990s, the NATO mission in Afghanistan was its first major military effort outside of Europe. In the years that followed, and as the group began to control operations in other parts of the country, the mission in Afghanistan also exposed many of the problems of NATO's renewed 21st-century existence.

One issue was that the perception of the global terrorism threat has evolved significantly among NATO countries over the years. From 2001 until the present day, many European nations have perceived terrorism as more of a threat to America, says Miles Pomper, a research associate at the Center for Nonproliferation Studies in Washington. As a result, there have been very mixed views about NATO's efforts to fight terrorism in Afghanistan and elsewhere. The conflict has also demonstrated gaps in the various countries' involvement, overall capacity, and commitment of resources.

Still, the mission in Afghanistan served as proof that the alliance could work, and some, like Burns, would argue that the conflict has indeed made the alliance stronger. Though not all NATO countries participated militarily in heavy combat areas, they have all contributed in some way in Afghanistan. "Even if there are fundamental differences in how people view the nature of the threat, the fact that they are able to work through those differences is a sign of strength, not weakness," says Lewis. "If the alliance were weaker, we would never have been able to do Afghanistan at all."

Also, for many nations, Afghanistan was also a chance for many countries to put their military into action for the first time in decades. The alliance coordinated military operations, improving practically and technically along the way, despite the nations' different views on the conflict.

However, Iraq was a different story, splitting the alliance where Afghanistan had brought it together. "NATO allies disagreed over whether it was a good thing to do, and it made lots of European countries more hesitant to work together with the U.S. on security issues because they were unhappy with Iraq," says former U.S. NATO Ambassador Kurt Volker, now a senior fellow at the Johns Hopkins School of Advanced International Studies. "So it had an impact on the alliance, even though it wasn't an alliance mission."

Iraq was the turning point for the alliance, says Nikolai Sokov, senior fellow at the Vienna Center for Disarmament and Non-Proliferation, part of the Monterrey Institute's Center for Nonproliferation Studies. The United States going into Iraq dissipated much of NATO's energy for the fight against terrorism. "We squandered a lot of potential," he says. "Terrorism is no longer as unifying an agenda as it was [immediately] after 9/11."

Apart from the mission in Afghanistan, many counterterrorism efforts since September 11 -- such as intelligence sharing and law enforcement -- have been conducted unilaterally or bilaterally, rather than through the military apparatuses of NATO. And rather than NATO itself, it's been the partnerships with non-NATO countries, especially in the Arab and Muslim world, that have often proved more useful in addressing the decentralized problem of terrorism, according to Pomper. "In the war on terrorism, the key countries aren't really NATO countries, they're Arab countries or countries with large Muslim populations," he says. "It's a military alliance. It's not necessarily the best instrument to deal with law and order and crime and case issues."

More recently, as allied forces remained in Afghanistan and the threat of terrorism persisted, the intervention in Libya this year showed that a decade after it expanded its reach after 9/11, NATO remains an effective force outside its own territory. "It was a proud moment in NATO history," says Burns.

Yet, the disagreement among members over whether to participate in the Libyan mission also demonstrated that the goals and the commitment of the alliance often remain ambiguous and contentious. "[Afghanistan] was not a good example of solidarity within NATO -- everybody pulling their weight ... although we did manage to get everyone to contribute. In Libya, that just went out the window. Only a third of the allies really contributed," Volker says.

Still, even with the challenges, NATO is the best alliance the United States has, argues Burns, and the past decade has indeed proven its worth. "Reality is, when you have 28 countries in one alliance, it's going to be a rare moment when all 28 agree to make the same effort. But as long as NATO is able to act collectively, that's still positive and it's still important. It's an important tool for U.S. foreign policy," he says.