Remembering 9/11: After the Terror, We Move Forward 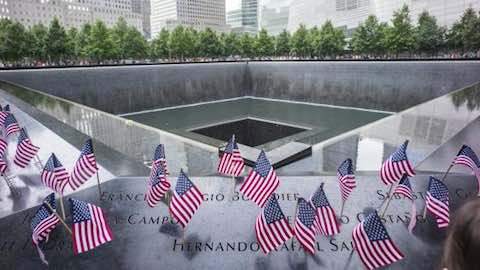 Remembering 9/11: After the Terror, We Move Forward

Suddenly, it's been years. That's an amazing realization when you remember how it was back then on September 11th, 2001. Calendars still counted off days, our eyes told us this. Clocks still ticked off seconds; intellectually, we knew. But time -- I would have sworn this in a court of law -- did not move on that tragic day

I remember, in those awful days of aftermath, asking my colleague , then the humor columnist, if he thought he would ever write jokes again. "For the last week," he told me, "I haven't even tried to write anything funny, and for a while I thought maybe I never would, or should."

He had it, we all had it, that sense of being stuck, unable to find your way back to the life you had lived before. I wrote 10 columns in a row about the horror I had seen, the planes crashing, the lives lost, the buildings melting, the people covered in dust. Finally, I had to force myself to write a column about something else, had to force myself to care about something that was not terror. That lasted one column. Then I went right back to what was now the norm. I was all terror all the time.

Now, somehow, that moment is past.

And I find myself remembering how I used to torture ants as a child, the happy hours I spent flooding their nests with water, watching them grab their larvae and run for safety. The thing that struck me, that earned my childish wonder and respect, was that they always came back. Destroy their world a hundred times, they would build it a hundred and one.

There is something of that in human beings. Indeed, it may be some of the best of what is in us. Call it stubbornness, call it resilience, call it faith, but we always defy the random cruelties of life, always dig ourselves out, bury our dead, mourn our losses, rebuild, find a way to move forward. We did it when fire burned down Chicago, when earthquake leveled San Francisco, when broken levees drowned New Orleans.

And we did it when terror astonished and devastated us on .

Granted, we emerged from that crucible changed in ominous ways. We found ourselves at war on three fronts, government more secretive and invasive than it has been in years. We are running a prison beyond the reach of habeas corpus on the island of Cuba. The government may not let you fly and will not tell you why.

Yes, is dead, and experts tell us the terror group he led is weakened and may soon follow. But terrorism itself remains alive and well, as does a fervent bigotry against Muslims that has seeped into the mainstream of American political thought where it exhibits itself with a shamelessness that once would have been unthinkable.

So there is reason to be concerned at the place to which we have moved. But, having felt stuck inside a nightmare, I know there is also reason to be grateful we moved at all, that clock and calendar did their work and that there resides in us the stubborn resilience of ants.

It felt as if we might never go forward from that moment. But we did.

"Remembering 9/11: After the Terror, We Move Forward "