Remembering 9/11: Captives to the Logic of Violence 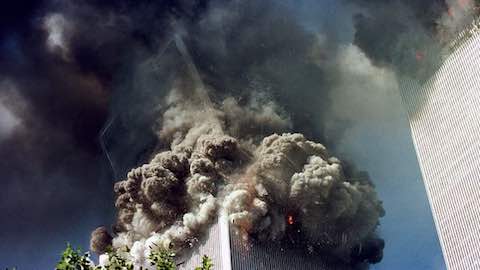 Remembering 9/11: Captives to the Logic of Violence

The abyss keeps deepening; the wars keep squandering our blood and treasure beyond all logic except the logic of violence. What ended on Sept. 11, 2001, it sometimes seems, was human evolution.

What ended on , it sometimes seems, was human evolution.

Suddenly, an irreparable schism opened between those in power and the rest of humankind, and a decision fell into place that war for profit would never end -- and there was nothing to be done about it, as the corporate media conveyed to the world with a knowing shrug. What fell into place was armed insanity as perpetual background noise, and any reach toward global community, understanding and forgiveness went on permanent hold.

"Peace, of course, is not just absent from video games. It has faded from any debate in surrounding the wars."

Thus spake the the other day, in a dazzlingly superficial reflection on the 10th anniversary of whatever happened that day, oh yeah, terror, evil, biff, bop, pow: "A Decade After the 9/11 Attacks, Americans Live in an Era of Endless War." I can't remember the last time I read something so glaringly lacking in moral intelligence. It must have been intentional.

Reporter uncritically informs us, for instance, that "radical religious ideologies, new technologies and cheap, powerful weapons have catapulted the world into (what a Pentagon report called) 'a period of persistent conflict. . . . No one should harbor the illusion that the developed world can win this conflict in the near future.' . . .

"By this logic," Jaffe goes on to tell us, "America's wars are unending and any talk of peace is quixotic or naive."

Pondering the profound changes this has wrought in American society, Jaffe visits video game culture, specifically a game called Call of Duty: Modern Warfare 2, which, he reports, portrays "a very different kind of war" -- full of good old slaughter, just like the World War II games, but without any kind of ending, no victory banner or grandly hoisted American flag, just dead bodies. "Victory is unattainable."

This is it, sucker, get used to it. Jaffe adds: "'Peace,' meanwhile, has become something of a dirty word in foreign-policy circles. Earlier this year, the House voted to cut all funding for the congressionally funded ." The funding was later restored, but . . . you get the idea.

All this is a warning: The powers that be and their scribes have had it up to here with "peace consciousness" and are trying to imprison it in the dark cell of their contempt. A decade after 9/11, the agenda couldn't be more stunningly clear. The enemy is Evil Itself, and we're taking it out with drones, but Evil regroups. This is going to take forever. We'll keep you informed just enough to stay terrified.

This, of course, is absolutely nuts. The mainstream media, beholden to power and corporate interests, have given up challenging their agenda and want the rest of us to as well.

It is in this context that we must take our stand. "Be a hero for peace!" is the cry of a group called , which is launching an effort to reclaim the meaning of 9/11, making it a day of reverence, connection and forgiveness.

"Be a hero for peace!" This is the cry of empowerment -- the cry of those who insist on a future that is not the endless playing out of the cycle of violence. And it is the cry of those who believe, with passion and a life's commitment, that we will end not simply the current bloody, pointless wars in and the , but war itself, and the addictive logic that fools us into thinking that the violence we perpetrate is the good kind, because it takes out evil.

"We know everything about war," says in a video on the organization's website. "Why is it that everyone knows where the Pentagon is and what the is, but (almost) no one knows about . . . the ? . . . Why is the USIP budget a fraction of the Pentagon budget? And what would happen if the funding ratio were reversed? These are questions we have not asked because we are captives to the logic of violence."

Heroes for peace are beyond number, but one of them is named Rais Bhuiyan, a South Asian immigrant living in who was shot in the face at close range shortly after 9/11 by a self-described "Arab slayer" named . Two immigrants were killed in Stroman's rampage and Bhuiyan, blinded in one eye, spent years in recovery. Afterward, he took on a startling project: He campaigned diligently to save the life of his would-be killer, who was on death row.

"I've had many years to grow spiritually," Bhuiyan told MSNBC reporter . "I'm trying to do my best not to allow the loss of another human life. I'll knock on every door possible."

Though Stroman was executed in July -- this was , after all -- Bhuiyan has written on his website: "Our work doesn't end here. We need to educate people about the healing power of forgiveness."

Forgiveness, think of it, in the name and spirit of 9/11.

"Remembering 9/11: Captives to the Logic of Violence "