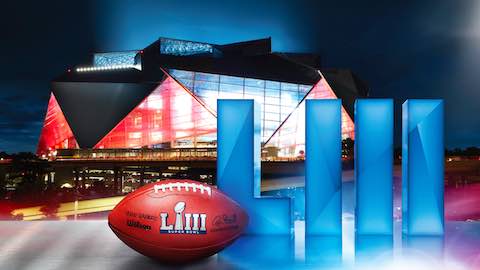 Super Bowl LIII features the No. 2 seed in each conference -- the AFC Champion Patriots against the NFC Champion Rams -- and is the first Super Bowl matchup of No. 2 seeds since the NFL began seeding teams in 1975.

Super Bowl LIII is a rematch of Super Bowl XXXVI, when the New England Patriots defeated the St. Louis Rams 20-17 on February 3, 2002.

With a New England Patriots Victory:​

- The Patriots will have captured their sixth Super Bowl championship, tied with the Pittsburgh Steelers (six) for the most Super Bowl victories in NFL history.

- New England will have won its 37th postseason game, surpassing Pittsburgh (36) for the most all-time.

- Head coach Bill Belichick joins GEORGE HALAS and CURLY LAMBEAU as the only coaches ever to win six NFL championships.

- Quarterback Tom Brady will have won six Super Bowls, surpassing Pro Football Hall of Famer Charles Haley (five) for the most of any player.

With a Los Angeles Rams Victory:

- The Rams will have won their second Super Bowl in fanchise history (Super Bowl XXXIV: Rams 23 Titans 16 ) and their first in Los Angeles.

- Quarterback Jared Goff becomes the first quarterback selected No. 1 overall to lead his team to a Super Bowl victory within his first three seasons.

The Patriots earned a trip to the Super Bowl with a 37-31 overtime win against Kansas City in the AFC Championship Game.

New England, who won Super Bowl LI and lost to the Eagles in Super Bowl LII last season, joins the Buffalo Bills (1990-93) and Miami Dolphins (1971-73) as the only teams in the Super Bowl era to appear in three consecutive Super Bowls. New England advanced to their 11th Super Bowl in franchise history and are looking for their sixth Super Bowl title, which would tie them with the Pittsburgh Steelers (six) for the most Super Bowl victories in NFL history. ​

The Rams advanced to Super Bowl LIII with a 26-23 overtime victory against New Orleans in the NFC Championship Game.

Brady, who is making his NFL-record ninth career Super Bowl start, is the only starting quarterback in NFL history to win five Super Bowls and the only player ever to be named Super Bowl MVP four times (XXXVI, XXXVIII, XXXVIII, XLIX and Super Bowl LI).

Patriots running back JAMES WHITE, who had a rushing touchdown in Super Bowl LII, has scored four touchdowns (three rushing, one receiving) in two career Super Bowl appearances. Over the past three postseasons (2016-2018), White leads the NFL with eight total touchdowns.

In the AFC Championship Game, Patriots wide receiver JULIAN EDELMAN had seven catches for 96 yards and joined Pro Football Hall of Famer JERRY RICE (151 receptions) as the only players with at least 100 career postseason receptions (105). Edelman has recorded at least five receptions in 12 consecutive playoff games, the longest such streak in postseason annals.​

Los Angeles Rams head coach SEAN MC VAY, who will be 33 years and 10 days old on Super Bowl Sunday, is the youngest head coach to lead his team to the Super Bowl. In each of the past two seasons under McVay, the Rams have ranked first or second in points per game.​

Los Angeles running back TODD GURLEY has rushed for a touchdown in each of the team's two postseason games this season. Gurley led the NFL with 21 touchdowns (17 rushing, four receiving) and ranked fourth with 1,831 scrimmage yards. Rams running back C.J. ANDERSON leads the team in postseason rushing and has 481 rushing yards in the postseason since 2014, the most in the NFL over that span.

Los Angeles defensive tackle AARON DONALD led the NFL with 20.5 in 2018 and joined Pro Football Hall of Famer LAWRENCE TAYLOR (1986) as the only players to record 20+ sacks and make it to the Super Bowl in the same season. Rams defensive tackle NDAMUKONG SUH recorded 1.5 sacks in the NFC Championship Game and has recorded at least one sack in three of his past four playoff games.