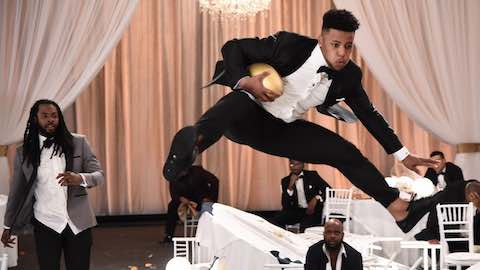 The National Football League kicked off the celebration of the 100th NFL season at Super Bowl LIII with 'The 100-Year Game,' a two-minute ad that aired before the Pepsi Super Bowl Halftime Show.

The NFL partnered with 72andSunny Los Angeles and renowned Friday Night Lights Director, Peter Berg, to tell the story of what happens when more than 40 NFL greats, announcers, officials and current players come together in a celebration of the spirit and pure joy of the game.

"As we approach our centennial season, we're not just embracing football's rich heritage but also looking toward the next 100 years. Football is loved by so many people -- from all generations, genders, and backgrounds -- and it was important to us that the spot was inclusive and emblematic of football's expansive influence on American culture," said NFL EVP and Chief Marketing Officer Tim Ellis. "We viewed the ad as an opportunity to partner with cultural icons and engage with the next generation of football fans. Our hope is that this spot, and the incredible wrap-around content we created with these stars, will energize everyone around the celebration ahead."

To help amplify the spot and shine a light on NFL100, the League took a modern approach to how it partnered with past and current players -- as well as the other unique talent in the spot -- in sharing content across a wide range of channels. Extra content, from behind-the-scenes to outtakes, was created during the production and helped create a cadence of influencers sharing something unique and special with their own fans.

"I feel honored to help ring in the NFL's centennial season with a piece of creative that brings to life the passion, energy and storied history of football," said Director Peter Berg. "In fact, it's one of the coolest things I've done in my entire career. As a lifelong fan of this great game, I think this spot will resonate with football fans around the world and help set the table for all of the exciting celebrations on the horizon over the next year."

As part of the NFL100 campaign celebrating the National Football League's 100th season, the NFL will embark on a year-long series with NFL Media -- including NFL Network and NFL Films -- to produce original content that celebrates the 100th season across multiple platforms.

To commemorate its centennial season, the NFL is launching 'NFL100,' a year-long celebration at Super Bowl LIII to bring generations of football fans, players, communities, and all 32 clubs together for a unique line-up of programming and activities. Following the launch of the NFL100 campaign during Super Bowl LIII, the celebration's events will officially kick off during the NFL Draft in April and build to the first game of the 100th season at NFL Kickoff in 2019. The NFL100 celebration will continue throughout the season and will culminate at Super Bowl LIV (Feb. 2, 2020) in Miami.