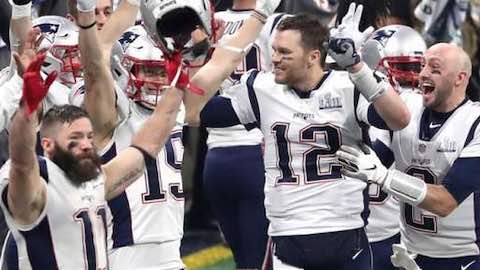 A grim contest won by the insufferable Patriots 13 to 3 over the Rams was partially salvaged by the NFL marketers, who came up with hilarity that included Marshawn Lynch.

Then in the season’s championship moment, Fred Flintstone clubbed the crap out of George Jetson.

In a single season, the NFL leapt into the 22nd century and fell back to the dark ages. Problem was, the Patriots’ 13-3 ooze-a-thon (Super Bowl LIII - Game Summary, Stats & Box Score) over the remarkably flaccid Los Angeles Rams Sunday evening wasn’t nearly as compelling an example of time travel as Doc Brown and McFly displayed in Back to the Future.

Perhaps the most remarkable thing to emerge from the viscera and ash of an exceptionally dreary Super Bowl was that the NFL nevertheless won big — with a halftime commercial.

Relative to other sports leagues and even some federal prisons, the stiff-necked NFL has been a North Korea when it comes to independent thinking and creative risk-taking. But with an awards-banquet parody featuring current and former great (and well-dressed) players trashing the joint with football plays, suddenly the NFL seemed, well, hip.

It could be that I’m over-reacting because the skit’s mayhem was triggered by Marshawn Lynch. Perfectly typecast as a mischief-maker, the ex-Seahawks star’s sneaky, failed attempt at snatching some cake as commissioner Roger Goodell droned on at the podium started a hilarious sequence of banquet-room football, with all of the smashed-table mayhem of a Western-movie saloon brawl:

The all-time greatest, most competitive NFL players gathered for the #NFL100 gala. What could possibly go wrong? pic.twitter.com/pvE0fKuSye

The commercial easily out-performed the first half, the halftime show (I believe was the group was Maroon Zero) and the second half. In fact, for the disinterested consumer, the video released by the NFL of some out-takes is better than any game action featuring Rams punter Johnny Hekker (no offense to his alma mater, Bothell High School) I could post here:

As for the tedious part, the game, the primary take from a Seattle perspective was that the NFC West champions peaked around midseason and began a circle of the drain that ended with an unceremonious gurgle and gloop in Atlanta’s Mercedes-Benz Stadium.

The weak showing made even more odious the NFC Championship outcome when New Orleans lost to LA because of perhaps the worst officiating non-call in playoff history, prompting a protest parade and Super Bowl boycott Sunday in the French Quarter.

There is no way the Saints behind veteran QB Drew Brees could have been held to a field goal by a good but not great Pats defense, which lost its leader, SS Patrick Chung, to a broken right arm early in the third quarter.

The Seahawks lost to the Rams by two points in October and five points in November, but the Rams began to fade later when RB Todd Gurley developed a sore knee and QB Jared Goff developed some shakes in his gun hand.

ESPN reported that 45 percent of the Rams’ 60 plays went for zero or negative yards — the second-highest percentage for the Rams this season, after a 15-6 loss to the Bears in Week 14. LA whiffed on its first eight third-down opportunities, and Goff finished 3-of-10.

In his third year, Goff regressed. Excluding games against woebegone Arizona and San Francisco, in his final six games he never had a QB rating higher than 83. A part of it was defenses catching up to the Rams’ misdirection, but a part of it was Goff’s unsteadiness in the pocket and penchant for poor decisions.

In his second season, there was regression too, for wunderkind coach Sean McVay, who had no answers in the fourth quarter when the Pats went to two backs and two tight ends to blast their way to two scores.

Then again, he’s hardly the first rival to be brought asunder by Pats coach Bill Belichick.

“There’s no other way to say it, but I got out-coached tonight,” McVay told reporters. Belichick had dialed into all the Rams’ weaknesses, and the defense held serve until a sub-par Tom Brady mustered a single touchdown drive of 69 yards and five plays.

The Super Bowl trophy doesn’t discriminate between lackluster and spectacular. In winning for the sixth time in nine appearances over 18 seasons in the free agency era, the Pats have done the remarkable in all manner of ways — ask the Seahawks.

It doesn’t mean anyone outside of Boston has to like it. Ot does mean it must be respected and envied. It also puts pressure on the NFL’s marketing department.

Because when the Pats go to Super Bowl LIV in Miami next year and beat the Dallas Cowboys 5-2, the videoheads are going to have to salvage the exercise again by topping the 2019 commercial.