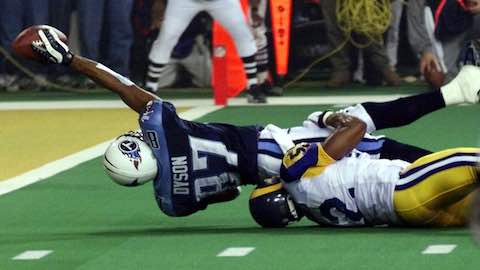 Becoming a starter via a journey through the Arena Football League to NFL Europe to the Rams, Kurt Warner's Cinderella climb from backup to superstar captured the imagination of America. Leading the Rams to their first-ever championship, Warner's 414 passing yards are still a single-game Super Bowl best. He spread the ball around to everyone on the Rams' offense, as nine different players registered at least one catch.

In one of the most exciting finishes in Super Bowl history, the Rams held on to their 23-16 lead by just one yard, as Titans wide receiver Kevin Dyson was dragged down short of the goal line by Mike Jones in the waning moments of the fourth quarter, preserving the Rams' first-ever Super Bowl title.

The first half of Super Bowl XXXIV was for the most part a defensive battle. Despite outgaining the Titans in total yards in the first half, 294--89, the Rams held only a 9--0 halftime. The Rams later scored their first touchdown midway through the 3rd quarter to go up 16--0. The Titans responded by scoring 16 unanswered points to tie the game with 2:12 left. This was the largest deficit to be erased in a Super Bowl and the first deficit that was greater than 10 points. On the Rams' ensuing drive, quarterback Kurt Warner completed a 73-yard touchdown pass to wide receiver Isaac Bruce to regain the lead. The Titans then drove to the St. Louis 10-yard line with six seconds remaining, but on the final play of the game, Rams linebacker Mike Jones tackled Tennessee wide receiver Kevin Dyson one yard short of the goal line to prevent a potential game-tying touchdown. This play went into NFL lore as One Yard Short, or simply The Tackle.

The Rams drove inside the Titans' 20 with each of their first six possessions, but compiled just 3 field goals and 1 touchdown to take a 16-0 lead. Holder Mike Horan's bobbled snap averted a 35-yard field-goal attempt to conclude the Rams' first drive.

Tennessee drove 43 yards with the second half's opening kickoff, but Todd Lyght blocked Del Greco's 47-yard attempt to keep the Titan's off the board. Kurt Warner's 31-yard pass to Isaac Bruce keyed the ensuing drive that was capped by Warner's 9-yard touchdown pass to Torry Holt with 7:20 left in the third quarter to give the Rams a 16-0 lead.

The Titans responded with touchdown drives in excess of seven minutes on each of their next two possessions. Steve McNair's 23-yard scramble set up Eddie George's 1-yard run in the final minute of the third quarter. McNair's 2-point conversion pass to Frank Wycheck was incomplete, but the Titan's defense forced a punt and the offense drove 79 yards in 13 plays, highlighted by 21-yard passes to Isaac Byrd and Jackie Harris, and capped by George's 2-yard run to cut the deficit to 16-13 with 7:21 remaining.

The Rams once again failed to get a first down, and following a punt, the Titans needed just 28 yards to set up Del Greco's game-tying 43-yard kick with 2:12 left. On the next play from scrimmage, Warner fired a deep pass down the right sideline to Bruce, who caught the ball at the Titan's 38, cut toward the inside, and outran the defense to the end zone to give the Rams a 23-16 lead with 1:54 left.

The Titans drove downfield, and McNair avoided a sack and completed a 16-yard pass to Kevin Dyson to place Tennessee at the Rams' 10 with six seconds remaining. With no timeouts, McNair attempted a quick pass to a slanting Dyson, who caught the ball in stride at the Rams' 3. However, Jones reacted quickly and stepped up to tackle Dyson at the 1-yardline as time expired. Warner was named Super Bowl XXXIV MVP, becoming the sixth player to win both the Super Bowl MVP and the NFL MVP during the same season. Warner was 24 of 45 for a Super Bowl-record 414 yards and 2 touchdowns. At the time, his 414 passing yards and 45 pass attempts without an interception broke Super Bowl records.

The Rams' speedy receiving tandem of Isaac Bruce and Torry Holt each topped 100 yards receiving and caught one touchdown apiece. Bruce had 6 catches for 162 yards, and Holt had 7 for 109 yards.

The Titans were the first team to come back from a 16-point deficit. 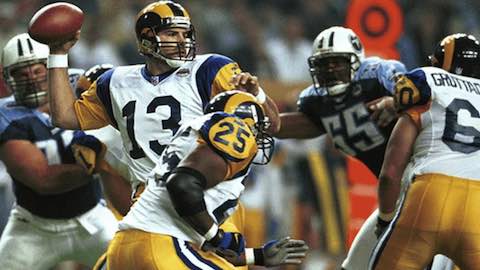 Becoming a starter via a journey through the Arena Football League to NFL Europe to the Rams, Kurt Warner's Cinderella climb from backup to superstar captured the imagination of America.

Leading the Rams to their first-ever championship, Warner's 414 passing yards are still a single-game Super Bowl best. Warner erased Joe Montana's record of 357 yards in Super Bowl XXIII as he spread the ball around to everyone on the Rams' offense, as nine different players registered at least one catch.

Warner put St. Louis ahead with 1:54 left to play when he hooked up with Isaac Bruce for a 73-yard touchdown. He didn't see the play as it unfolded because Titans defensive end Jevon Kearse was bearing down on him. However, Warner did watch the replay from his hotel room several times.

"The great catch he made, then the run after the catch (was great)," Warner said.

Warner did most of his damage in the first half when he passed for 277 yards and drove St. Louis into the red zone on five straight trips. His performance was indicative of the type of passing clinic he put on throughout the year.

Warner beat out teammate Marshall Faulk for league MVP honors after passing for 4,353 yards, 41 touchdowns and leading the Rams to a 13-3 mark in the regular season. He only got a chance to start this year because Trent Green, signed last offseason by the Rams, suffered a season-ending injury in the preseason.

"I was going to continue to play football as long as I could," the signal-caller from Northern Iowa said. "I was getting to the point thinking how much longer am I going to have before people say he is too old to give him an opportunity."

Previously, Warner got his opportunities in the Arena Football League and NFL Europe but had no serious shot in the NFL after being cut by the Green Bay Packers in 1994.

"From a quarterback standpoint, it's easier to fall through the cracks than any other position," Rams coach Dick Vermeil said, "because normally within a pro football franchise you already have a starting quarterback or you're about to draft a first-round pick -- This type of athlete entering the National Football League doesn't get what you call an equal opportunity."

Warner made the best of his.

After the game, many sports writers commented on Warner's rise from an unknown backup to a Super Bowl MVP, but Warner himself wasn't impressed by it. "How can you be in awe of something that you expect yourself to do?" Warner pointed out. "People think this season is the first time I touched a football; they don't realize I've been doing this for years -- just not on this level, because I never got the chance. Sure, I had my tough times, but you don't sit there and say, 'Wow, I was stocking groceries five years ago, and look at me now.' You don't think about it, and when you do achieve something, you know luck has nothing to do with it."

However, he later told The New York Times "I guess it is sort of a storybook ending. When you think about where I was and where I am now, it seems pretty incredible." 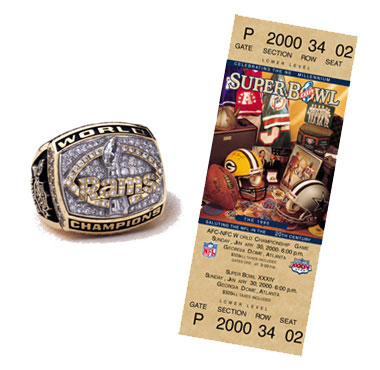