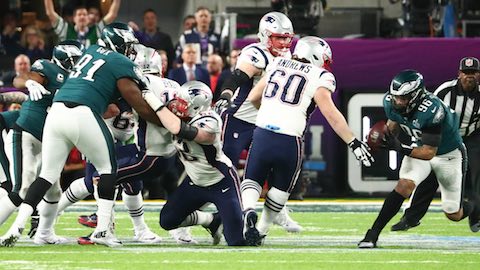 You may recall a previous Super Bowl where a late turnover saved the game for the Patriots. This time, Pats were the victims, and Eagles are the champs. Go ahead -- smile.

That may be an odd observation after a Super Bowl that had more points and yards than a Chinese restaurant has rice. But good defense in the NFL isn’t always about the fewest seasonal points or yards. It is also about a well-timed play or two that can disrupt the most relentless of offenses.

When Eagles DT Brandon Graham reached QB Tom Brady for the offensive orgy’s first sack, only 2:16 left was left in Super Bowl LII at U.S. Bank Stadium in Minneapolis. Graham did for Philadelphia what obscure CB Malcolm Butler did for the Patriots three years earlier against the Seahawks — create a late turnover to protect a lead threatened by a hot quarterback.

For all that will be said about Most Valuable Player Nick Foles (before Sunday night, a phrase unwritten since Gutenberg was a child) and the game’s the offensive numbers — including the outlandish fact that the 1,151 combined yards mark the most in any game, regular season or postseason, in NFL history — it was one good defensive play that decided the Eagles’ 41-33 victory over the Patriots.

The Eagles recovered the fumble and turned it into a field goal for the game’s final score. They still had to survive one last New England possession, which reached the end zone, where Brady’s Hail Mary heave fell harmlessly to the turf.

But the threat level on the last possession was far less than previous one, mostly because coach Bill Belichick made one of the dumber play calls of his career — a reverse on the kickoff return that died at the New England nine-yard line.

Graham’s pivotal play is another endorsement of the notion by Carroll and many of his contemporaries that even in a horse race of a game, an emphasis on premier pass rushers will pay more dividends than any position besides quarterback.

Graham is a former first-round draft choice, taken 13th overall out of Michigan in the 2010 draft, one spot ahead of Seattle’s choice of FS Earl Thomas from Texas. Graham was part of an Eagles defense Sunday that gave up an incredible 505 passing yards and never once forced the Pats to punt, yet won the game behind a backup quarterback.

Before the game, the consensus for an Eagles upset was predicated on replicating what the New York Giants had done in their Super Bowl wins in 2008 and 2012 over the Patriots — force Brady into haste primarily with a four-man rush. The Pats managed just 14 and 17 points in those losses.

Against Seattle, the Pats had only 14 points entering the fourth quarter, but took advantage of the concussion absence of DE Cliff Avril and injuries to SS Kam Chancellor and CB Richard Sherman to complete 13 of 15 fourth-quarter passes and two touchdowns.

While Sunday the Eagles were helpless at times against Brady, he was “only” 28 for 48 passing. Although he had no interceptions, he was more inaccurate than usual. How much was Brady being 40 and how much was Eagles’ harassment is a verdict awaiting the video forensics.

But it took just a single sack to turn a game that Eagles coach Doug Pederson, the pride of Ferndale High School and a childhood Seahawks fan, kept close by aggressive playcalling that Foles executed far above the back of his baseball card.

The boldest was a gadget play that probably injured Washington Huskies coach Chris Petersen, when he hit his head on the ceiling fan after a leap of delight.

Ahead 15-12 in the second quarter and facing fourth-and-goal at the one, Pederson skipped a field goal try and instead wrote himself into Super Bowl history.

In the shotgun, Foles stepped aside to allow RB Corey Clement to take a direct snap and run left, while Foles ran right toward the end zone. Clement pitched to TE Trey Burton sweeping right on an apparent end-around — until he lobbed softly to an undefended Foles for a touchdown.

In a game rich with delights, that was the thigh-slapper that will linger long as a Belichick-beater, something many fans outside New England value as if it were spun gold.

It may have been the Super Bowl’s best trick play, not only because it worked but in a small way elevated an NFL season that had boatloads of high-profile injuries as well as national controversies that annoyingly went all the way to the White House.

It became an easy argument to suggest the NFL was losing its grip on the American sporting consciousness. Ratings have been down, and reasons vary. But no rational sports fan can argue that in its biggest annual moment Sunday, the NFL failed to deliver.

Best of all — at least in the view from outside of New England — the Clanton gang lost the shoot-out at the OK Corral. The Philadelphia Earps own Tombstone for a year.