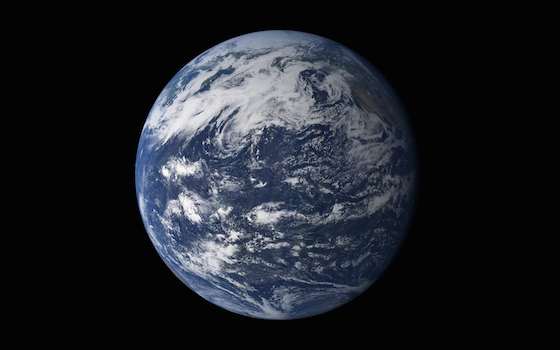 "We cannot afford to lose another decade."

My God. There's more darkness in this quote than The intended. I winced when I read these words of , co-chairman of the committee that wrote the latest on Climate Change IPCC report, which the Times quoted in a recent editorial headlined "Time Is Running Out."

What Edenhofer meant, of course, was that we can't afford to squander another decade politically, with the governments of the nations that comprise Planet Earth failing to come up with an effective treaty to control greenhouse gas emissions, deforestation and other reckless excesses of industrial-growth capitalism, a.k.a., addiction to endless profit. We've got, you know, a 15-year window here to act with collective sanity. That's all the time we have left, according to current scientific consensus, to limit planetary warming to 2 degrees Celsius above the pre-industrial era.

"Beyond that increase, the world could face truly alarming consequences." So the Times informs us, then, I fear, yawns, shrugs. Oh yeah, these international conferences are "exercises in futility" that so far have produced just one treaty, the Kyoto Protocol, which didn't accomplish much, which the never ratified, etc. And greenhouse gas emissions keep escalating. Alas, people just don't care about this as much as they used to, the paper concludes, washing its hands of the matter. This is the limit of official concern.

What the Times editorial, in all its liberal consternation, fails to say is that the kind of global change that's needed can't be left to -- will not be -- implemented by the designated representatives of world governments, most of which are beholden far, far, far more to economic and military special interests than they are to the future of the human race.

Consider nothing more than the environmental costs of the U.S. commitment to military hegemony and endless war. Not only do we shatter countries and kill and displace people by the millions in pursuit of a neocolonial agenda, we . . . waste gas, in staggering gulps.

"Even setting aside the accelerated operational tempo of wartime, the has been the country's single largest consumer of fuel, using about 4.6 billion gallons of fuel each year," according to the 2011 Cost of War report. The M-1 Abrams tank gets half a mile to the gallon. "By one estimate, the U.S. military used 1.2 million barrels of oil in in just one month of 2008," the report says.

Furthermore, according to the report, U.S. war games in , and elsewhere in the past dozen years have: accelerated the destruction of forests and wetlands; wrecked the habitat and migratory routes of birds and other wildlife; and contaminated air, water and soil with a wide array of toxic substances, including depleted uranium, the use of which in missiles and shells has spread radioactive dust over large areas and been blamed for significant increases in cancer, birth defects and other horrific conditions in affected areas.

But the military gets a free pass in the mainstream media. Its toxic adventurism never comes up in connection with discussions about climate change and other environmental matters. Such concerns are confined to their own special category, which never threatens business as usual.

And of course business as usual is what has to be not merely threatened but upended. This is what's missing from the national hand-wringing over climate change. As writes this week in The Nation:

"End the dishonesty, the deception. Stop lying to yourselves, and to your children. Stop pretending that the crisis can be 'solved,' that the planet can be 'saved,' that business more-or-less as usual -- what progressives and environmentalists have been doing for forty-odd years and more -- is morally or intellectually tenable. Let go of the pretense that 'environmentalism' as we know it -- virtuous green consumerism, affluent low-carbon localism, head-in-the-sand conservationism, feel-good greenwashed capitalism -- comes anywhere near the radical response our situation requires."

Stephenson's recommendation: Forget about , which is more about picnics than protest, and reclaim the sort of mindset that prevailed during the civil rights movement and, before that, the anti-slavery movement.

"I'm talking about a struggle," he says, and he's right, up to a point. If all we did was read The , we'd be nothing more than spectators watching in moviegoer horror as economic forces finished the job of permanently wrecking our life-sustaining habitat. No, he's crying. Everything is at stake! This requires blood, discomfort and persistence beyond anything we've ever attempted or imagined.

But struggle and anger alone won't do it. We need intense activism along with structural analysis and the building of alternative, sustainable lifestyles. We need wisdom, reverence and creativity that we pull up from the depths of our uncertainty. Author calls it "the Great Turning." It's a shift in consciousness that aligns social healing, economic fairness and an end to war with environmental sustainability. And the time to make it happen is running out. We can't afford to lose another decade, or another 20 minutes.