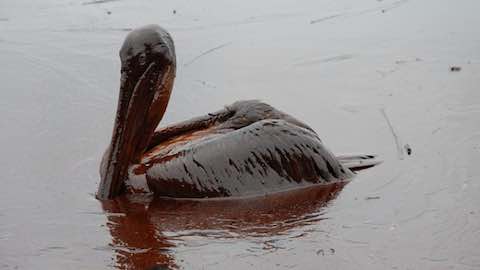 Pipeline disasters are part of the price we pay for relying on oil.

The recent oil spill in Santa Barbara, California hit home for me in a painful way. As a southern Californian for many years now, I take any excuse to head up the coast to Santa Barbara I can get.

It’s a particularly beautiful stretch of pristine coastline, populated by an abundance of marine mammals.

A few years ago, at a family reunion, I joined my relatives on a boat ride in that area. Dolphins found us almost immediately -- a hundred or more, delighting us in the wake of our boat.

I stayed up front at the bow, looking directly down on dolphins below me, while one of my relatives exclaimed in excitement at the harbor seals and sea lions.

Visitors there routinely catch glimpses of the abundant wildlife. A friend who visited the Channel Islands off the coast of Santa Barbara spotted several different types of whales. Gray whales migrate from Alaska to Baja California every year to breed. Humpbacks, blue whales, fin whales, and orcas swim there too.

Life was already hard enough for California’s marine life -- particularly the sea lions -- even before a pipeline ruptured along the shore in May, gushing over 100,000 gallons of oil onto the coast and into the sea.

An enormous mass of warm water, which scientists christened “the blob,” is driving fish away from their normal habitats. That, in turn, is forcing mother sea lions to travel farther from their rookery to fish, leaving their pups to nearly starve.

For months now, Californians have been finding dead and dying sea lion pups washing up on our shores. Now those animals are contending with an oil spill too.

The company responsible for the spill, Plains All American Pipeline, has apologized. It will also pay for the cleanup.

But that doesn’t do a bit of good for the pelicans, dolphins, and sea lions who have already died. The results for the local ecosystem -- one of the last remaining stretches of undeveloped coastline in all of California -- could be devastating.

Disasters like this are an inescapable cost of running our economy on fossil fuels. There's no way to keep oil from spilling out of pipelines, other than to stop drilling for oil.

What if we started thinking differently about where we get our energy? As Bill Maher said, “You know what happens when windmills collapse into the sea? A splash.”

OtherWords columnist Jill Richardson is the author of Recipe for America: Why Our Food System Is Broken and What We Can Do to Fix It. OtherWords.org.