5 Radical Takeaways from the Pope's Letter on Climate 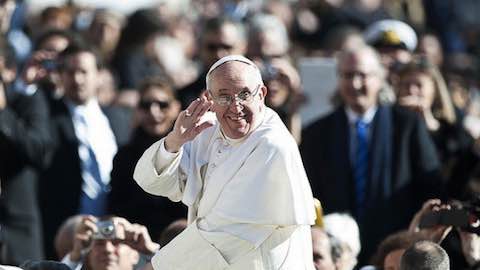 5 Radical Takeaways from the Pope's Letter on Climate

Pope Francis recognizes that there's no way to stop climate change without confronting the way the world does business. That's huge.

Pope Francis just released an "encyclical," a letter meant to serve as a guide to understanding our personal relationship to some of the most complex issues of the day through religious doctrine.

This particular encyclical is on climate change and is addressed not just to the globe's 1.2 billion Catholics, but to everyone of any -- or no -- faith. In it, Pope Francis boldly challenges us all to take an honest look inside our hearts and question the foundations of a society that’s created wealth for some at the expense of others and "our common home"-- the planet earth.

Here are five key quotes from the encyclical that will shake up the global climate debate.

"We have to realize that a true ecological approach always becomes a social approach; it must integrate questions of justice in debates on the environment, so as to hear both the cry of the earth and the cry of the poor."

It's not hard to see how climate change hits people living in poverty first and worst, and inevitably widens the gulf between rich and poor. After extreme weather washes away their homes or drought kills their crops, those living in poverty have a harder time bouncing back than those with savings accounts and sturdier houses.

But what's really radical is how the Pope names inequality itself as an impediment to solving a looming planetary and human rights crisis. The encyclical calls out "masters of power and money" to stop masking the symptoms and address climate change in service of the common good.

2. The global economy must protect the Earth, our common home.

"The economy accepts every advance in technology with a view to profit, without concern for its potentially negative impact on human beings."

Today's global economy profits at the environment's expense. And the pursuit of growth is fueling environmental degradation, natural disasters, and financial crises. Pope Francis envisions a people-and-planet-first economy more in harmony with the environment that would prevent imbalances of wealth and power and foster peace among nations.

3. Everyone must divest from fossil fuels and invest in the future.

"We know that technology based on the use of highly polluting fossil fuels… needs to be progressively replaced without delay."

Pope Francis is crystal clear that the current development model based on the intensive use of coal, oil, and even natural gas has to go. In its place we need renewable energy options and new modes of production and consumption that combat global warming. This is precisely what a growing movement of students, faith communities, socially responsible investors and everyday citizens are calling on individuals and private and public institutions to do: Divest their money from fossil fuels and invest it in climate solutions like wind, solar, and energy efficiency.

4. It's time for powerful nations to pay their fair share.

"A true 'ecological debt' exists, particularly between the global north and south. … In different ways, developing countries, where the most important reserves of the biosphere are found, continue to fuel the development of richer countries at the cost of their own present and future."

Countries in the global North have benefitted from fossil fuel-driven industrialization, while developing countries bear the brunt of the related greenhouse gas emissions. So while everyone must act to avoid climate disruption, rich countries have a greater responsibility. For starters, they must make rapid, deep cuts in carbon emissions. And they have to keep their promise to finance the cost for poorer countries to build climate resilience and transition to renewable energy through the Green Climate Fund.

"Obstructionist attitudes, even on the part of believers, can range from denial of the problem to indifference, nonchalant resignation, or blind confidence in technical solutions."

There's only one way to meet the climate challenge: Extinguish the "dig, burn, dump economy." And markets and technology can't be relied on to do the job. Gimmicks like trading carbon credits as a financial commodity or burning coal in "cleaner" power plants are distractions from the only real solution: Stop digging up and drilling -- then burning -- oil, gas, and coal.

Pope Francis is calling for solutions to climate change that is rooted in our "deepest convictions about love, justice, and peace." His letter to the world illuminates a radical, compassionate path that shows what it truly means to have faith in humanity.

"5 Radical Takeaways from the Pope's Letter on Climate"