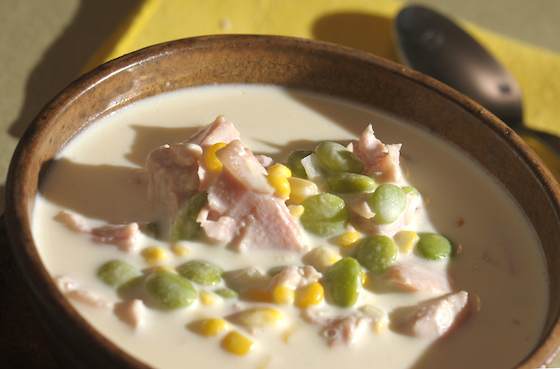 The name, from a Narragansett Indian word for boiled corn kernels, can't begin to explain the dish that tastes better than you'd imagine.

Succotash is a combination of corn and beans and sometimes tomatoes, depending on regional availability and preferences.

The formula may seem plain, but when you put the basics together you get a dish that's comforting and tasty. Think of it as a vegetable version of mac and cheese.

It's also a recipe that varies according to the affluence of the cook.

For some cooks succotash is what you'd make the day before the rent money is due.

The starchy vegetables are filling and cheap. For others, succotash is an excuse to simmer vegetables in butter and cream. What's not to like about that?

Whatever your inclination, rich or lean, succotash is a wonderful dish for two.

Using bags of frozen vegetables, you can measure out what you need for the recipe and return the excess to the freezer. To turn succotash into a meal, add a few bits of leftover meat or poultry. And if you're looking for soup that revives your chilled spirit, add broth, milk or cream to succotash.

This version of succotash is an entree, soup and creamy splurge (If you prefer a lower-fat dish, use only milk.)

For the turkey, look for smoked turkey drumsticks or wings in the meat section of the supermarket. One drumstick or wing will yield enough meat for this recipe. If you can't find smoked turkey, switch to diced ham.

Melt butter in medium-size pot over medium heat. Add shallot and cook for 5 minutes or until tender, stirring frequently. Stir in flour until absorbed. Add milk, a little at a time, stirring constantly. Add half-and-half. Bring to a simmer; do not boil.

If you use only milk, eliminating the half-and-half, each serving has 14.5 grams total fat.