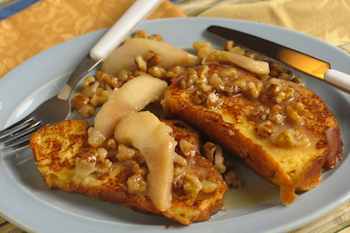 Learn how to make this amazing French Toast recipe with Spiced Pears for two.

If you ever feel guilty that you let bread go stale before you can finish it, I have two words for you: French toast.

Nothing does a tastier job of reviving day-old bread than a soak in milk and eggs.

In fact, you might be tempted to ignore a chunk of bread for a day or two, just to have the fixings for a sumptuous breakfast.

But don't expect any bread to yield the fluffy, pillow-like texture and delicate flavor of great French toast. Whole grains are too coarse-textured and dark breads such as pumpernickel, too strongly flavored. Instead I recommend challah (egg bread) for its soft texture, mild flavor and absorbent qualities.

Along with the bread type, consider the thickness, especially if you're setting bread aside.

Too dense and the bread becomes heavy and soggy; too thin and the toast falls apart during cooking. Bread sliced 1-inch thick is just right.

The final consideration is what you'll slather on your French toast. Maple syrup and butter are classic accompaniments, especially if you can't wait to dig in. However, if you devote a few more minutes to the dish you can create a luscious topping of spiced pears with walnuts.

[ Also How to Make the Best French Toast ]

To make spiced pears melt 1 tablespoon butter in medium skillet. Add pears, sprinkle on five-spice powder and cook over medium heat for 5 minutes, or until tender and just starting to brown, turning occasionally.

Pour in pear juice. Increase heat to high, scrape up any browned bits in skillet and reduce liquid by half. Stir in honey and walnuts. Remove pear mixture from skillet and set aside. Wipe out skillet.

[ Also How to Make the Best French Toast ]