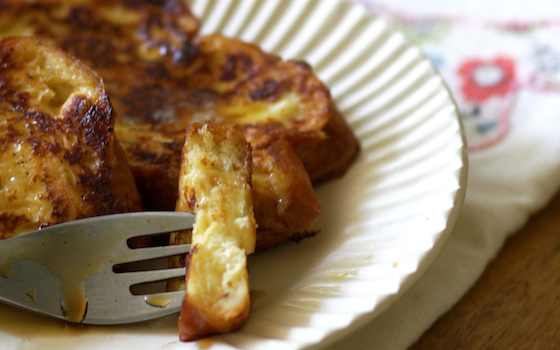 Ah, French toast! That iconic, special occasion, breakfast-in-bed treat that so many people long for ... only to end up with soggy, burned toast and a big mess in the kitchen. But it isn't that difficult, or that messy, to make golden, crispy-edged, truly delicious French toast. Let us show you how.

The ideal French toast is browned and crispy on the outside and creamy on the inside. It is not dry and it is not soggy. It has a rich, custard flavor (without being too eggy) and is usually sweetened with sugar and garnished with maple or fruit syrup, fresh fruit and butter. But it can be served savory as well.

French toast has very few ingredients, so it's important to pay attention to them. Try to purchase quality eggs, use half-and-half if possible, and select the right bread for the kind of results you are looking for. And don't skimp on the maple syrup!

French toast is mostly bread, so the kind of bread that you use is important. Challah or egg bread is made with eggs and butter and will give you gorgeous creamy insides. This is my go-to bread for French toast. Tightly crumbed, country-style breads are nice, too, and will give you a sturdier, less creamy French toast. Classic French baguettes sliced on the diagonal make a nice, chewy version.

Just avoid generic white sandwich bread and rustic breads with large holes and thick crusts if at all possible. The rustic bread just won't hold the custard, and the generic bread is too soft and characterless.

I like to buy a loaf that is not pre-sliced so I can have control over how thick my slices are. I usually like at least a 1-inch thick slice and no thinner than 3/4-inch thick. This helps to keep the bread from becoming too soggy and promotes a nice, creamy interior. Ideally, it should be slightly stale, as fresh bread will often end up with a limp texture. Rich breads like challah and egg bread can be left out with the wrapper open the night before, but country breads are better if kept packaged. Bottom line: it's not the end of the world if your bread is fresh, but a slightly stale loaf is preferable.

The milk and egg mixture into which you dip your French bread is basically a custard. This is an important component to your success. Try to use quality eggs, as the egg is a dominate flavor, and I prefer half-and-half over milk for its richness. Whole milk is a good substitute but avoid thin skim milk if possible. You can use cream for extra richness, but I find it to be a little too much.

Some people simply dip their bread in the custard, which works OK with the thinner, pre-sliced sandwich bread. The sturdier country loaf and baguette can handle a longer soak, which will also help to soften their often tough crusts. With thick slices of challah, I find that a short soak produces the best texture.

Most of the time, French toast is served as a sweet dish with a touch of sugar in the custard and plenty of maple syrup poured on top. But don't forget that French toast also makes a delicious savory breakfast. Leave out the sugar and serve it topped with things like sautéed spinach, mushrooms, bacon, ham, onions and so forth.

The recipe below instructs you to whip up the custard in the pan which you are using to soak the bread. I like to use an 8-inch by 8-inch square cake pan, which will fit four slices at a time. This saves washing up an extra bowl. Also, to avoid a mess, set up the pan with the soaking bread as close to your stove as possible and be sure to have your serving platter nearby -- once you start cooking the bread, things move rather quickly.

Many recipes will have you preheat an oven on low to keep your first batch of French toast warm (just place it on a wire cooling rack and slide it into the oven). I find that the second batch really doesn't take that long to cook and so I don't bother with this, but it might be a good idea if you're doubling this recipe or if your pan size limits you to only cooking two pieces at a time.

When whisking the eggs and half-and-half for the custard, be sure that the egg is completely whisked into the liquid and there are no bits of white or yolk -- any unwhisked bits of egg will cook up hard and separate. Finally, be sure to let the excess custard drip off of the bread before you place it in the pan to avoid a custard puddle forming beneath the bread as it cooks.

How To Make The Best French Toast

2 to 3 tablespoons butter, plus more for serving

Whisk the eggs, half-and-half, salt and sugar in the cake pan until the egg is completely incorporated into the liquid.

Place the frying pan on the stove over medium-low heat. Move the pan with the custard next to the stove.

Place four slices of bread into the custard to soak for one minute. Flip the slices and soak another minute.

While the bread is soaking, add 1 tablespoon of butter to the pan. When it starts to foam, tilt the pan to completely coat the bottom. Lift one piece of bread from the custard and hold it briefly over the custard to let any excess drip off. Lay the bread gently in the frying pan. Repeat with additional pieces.

After a few minutes, peek under a slice of bread to see if the French toast has turned golden and browned. When it has, flip each piece and continue cooking. Monitor and adjust the heat so that the toast doesn't burn.

When the first batch has nearly finished cooking, place the remaining four slices of bread in the custard to soak, one minute per side.

Additions for sweet French toast: You can add a touch of cinnamon or nutmeg to the custard or a tablespoon of brandy or a teaspoon of vanilla. Other popular additions include orange or lemon zest.

Sweet toppings for French toast: Maple syrup is classic, but you can branch out into other kinds of syrups, fruit sauces or jams. Fresh fruit and powdered sugar are also popular.

For savory French toast: Omit the sugar in the custard. Top with sautéed vegetables, parmesan cheese, and/or cooked ham or chicken.