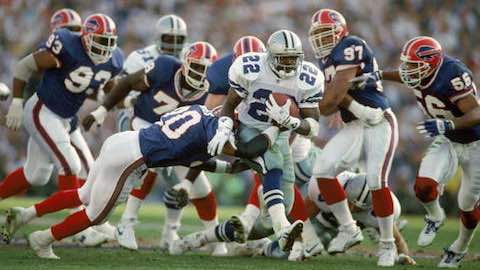 The Cowboys 52-17 win over Buffalo marked the resurgence of Dallas' Super Bowl dominance, and turned out to be the first of three Cowboys Super Bowl wins to come in the next four years. Aikman hooked up with wide receiver Michael Irvin twice for scores, with wide receiver Alvin Harper and tight end Jay Novacek also finding paydirt via the pass. Aikman's performance was spectacular. He completed 22 of 30 passes for 273 yards to go along with his four touchdowns.

The Cowboys' Super Bowl XXVII victory marked the resurgence of Dallas' Super Bowl dominance, as the victory turned out to be the first of three Cowboys Super Bowl wins to come in the next four years. Dallas' win was its third in its record sixth Super Bowl appearance, while the Bills became the first team to lose 3 Super Bowls in a row.

Troy Aikman passed for four touchdowns, Emmitt Smith rushed for 108 yards, and the Cowboys converted nine turnovers into 35 points while coasting to the victory.

Super Bowl XXVII started out well for Buffalo. The Cowboys were forced to a three-and-out on their opening possession. Bills special teams expert Steve Tasker then blocked the ensuing punt, knocking the ball out of bounds at the Cowboys 16-yard line. Four plays later, Thurman Thomas scored on a 2-yard touchdown run to give the Bills the 7--0 early lead. Then the wave of Bills turnovers began. The first two of Buffalo's record number of turnovers helped the Cowboys take the lead for good late in the first quarter.

First, Dallas safety James Washington intercepted Jim Kelly's pass and returned it 13 yards to the Bills' 47, setting up Aikman's 23-yard touchdown pass to tight end Jay Novacek with 1:36 remaining in the period. On the next play from scrimmage, Kelly was sacked by Charles Haley and fumbled at the Bills' 2-yard line where the Cowboys' Jimmie Jones picked up the loose ball and ran two yards for a touchdown.

Dallas, which recovered five fumbles and intercepted four passes, struck just as quickly late in the first half, when Aikman tossed 19- and 18-yard touchdown passes to Michael Irvin 18 seconds apart to give the Cowboys a 28-10 lead at intermission. The second score was set up when Bills running back Thurman Thomas lost a fumble at his 19-yard line.

Buffalo scored for the last time when backup quarterback Frank Reich, playing because Kelly was injured while attempting to pass midway through the second quarter, threw a 40-yard touchdown pass to Don Beebe on the final play of the third period to trim the deficit to 31-17.

But Dallas put the game out of reach by scoring three times in a span of 2:33 of the fourth quarter.

Aikman, the game's most valuable player, completed 22 of 30 passes for 273 yards.

The most memorable play of the game came well after the Cowboys had built an insurmountable lead. The Bills managed to advance to the Cowboys' 31-yard line. But Bills backup quarterback Frank Reich -- who replaced injured starter Jim Kelly in the second quarter -- fumbled while being sacked by Cowboys lineman Jim Jeffcoat. Cowboys defensive lineman Leon Lett picked up the ball with no one in sight and appeared destined for a 64-yard touchdown return. As Lett started to showboat prior to crossing the goal line, Buffalo wide receiver Don Beebe stripped the ball out of Lett's arm and into the end zone. The ball rolled out of bounds for a touchback. If Lett had scored the touchdown, the Cowboys would have topped the previous Super Bowl record of 55 points scored in by the 49ers in Super Bowl XXIV against the Broncos. Cowboys running back Emmitt Smith led all rushers with 108 yards and a touchdown, while also catching 6 passes for 27 yards. Michael Irvin was the Cowboys' leading receiver with 6 receptions for 114 yards and 2 touchdowns. Jay Novacek added 7 receptions for 72 yards and a touchdown. Lett recorded a sack, a fumble recovery, and forced 2 fumbles.

Reich and Kelly combined for 22 out of 38 completions for 276 yards and a touchdown, but also threw 4 interceptions. Bills running back Thurman Thomas, who compiled 2,113 combined rushing and receiving yards during the season, was held to just 29 combined yards. Andre Reed was the Bills' top receiver with 8 receptions for 152 yards. Bills running back Kenneth Davis was their leading rusher with 86 yards. Davis also caught 3 passes for 16 yards and returned a kickoff for 21 yards, giving him 123 total yards.

Buffalo had seven possessions which ended in four plays or less because of turnovers and resulted in five Dallas touchdowns. Irvin and Bills receiver Andre Reed each had over 100 yards receiving, making it the first time players from different teams had at least 100 yards receiving in a Super Bowl; Irvin had 114 yards, while Reed had 152. Reed's total is the highest for a player on a losing team.

The victory was the ninth in succession for the NFC over the AFC. 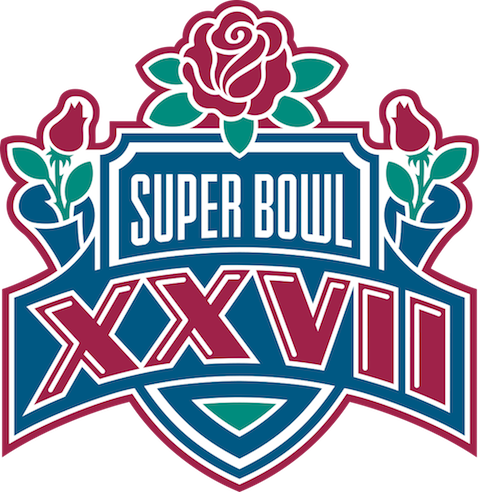 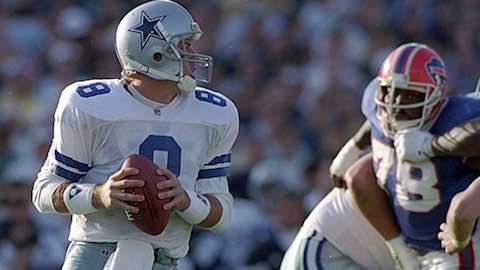 Super Bowl XXVII MVP, Cowboys quarterback Troy Aikman was was nearly flawless, completing 22 of 30 passes for 273 yards and four touchdowns for a quarterback rating of 140.6. Aikman also rushed for 28 yards.

In the second half, Aikman and wide receiver Alvin Harper connected on a 45-yard touchdown pass as the Cowboys rolled to the 35-point win. 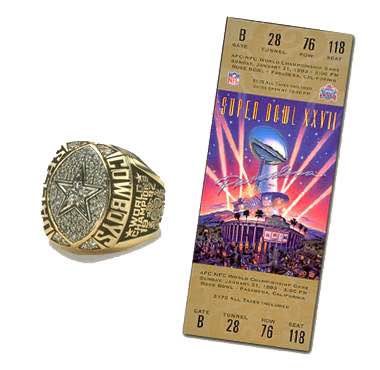