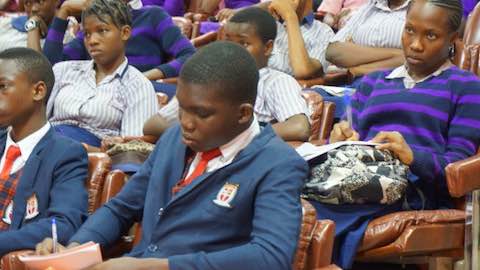 Nearly half of Nigeria's population is between 15 and 34. Those young people were key to the peaceful transition of power in Africa's most populous country.

A week before the recent presidential election in Nigeria, I was talking with my friend Ebere Raymond, a third-year student at Imo State University in Nigeria.

He told me that "whoever wins the heart of the Nigerian youth will be announced as the next leader." I knew the youth were involved in the presidential election. But judging from the outcomes of the previous elections, in which young people were naïve about the issues at hand and manipulated by politicians to take part in electoral violence, his statement seemed nonsensical.

It would turn out, however, that my friend was right.

Nigeria's presidential election, which proclaimed Muhammadu Buhari as the victor earlier this April, was groundbreaking for the country's democracy. Although the international community, including the U.S. government, was skeptical of the election due to the ever-present risk of vote-rigging, many observers deemed the result relatively transparent and credible. The European Union Election Observation Mission reported that they did not find any evidence of systematic manipulation of results. (However, the electoral result from Rivers State may have been rigged in favor of the outgoing president, Goodluck Jonathan).

It was shocking to hear that President Jonathan phoned Buhari to concede defeat. It was the first time in Nigeria's history that an opposition candidate defeated the incumbent head of state. Immediately after the election result, the U.S. government and other countries congratulated the Nigerian people on their historic and largely peaceful elections.

Even more remarkable, however, was the level in which the Nigerian youth participated in the election.

Appealing to the Youth in Nigeria

Unlike in previous elections, young people dominated the 2015 presidential campaign.

Not only were the youth the key voters in the election, making up half of the country's population, but they were also the drivers of the campaigns, having participated in the daily activities of their parties.

Since young people were the primary attendees at campaign rallies, the two main parties -- Jonathan's People's Democratic Party (PDP) and Buhari's All Progressives Congress (APC) -- shifted their campaign platforms accordingly. Jonathan tried to appeal to the youth by pointing out that he was the younger candidate and therefore would represent them better. Buhari promised that if elected, he would address the issues that young people care about -- in particular, employment prospects. He also recruited 25,000 recent college graduates to assist in his campaign.

Although much of the youths' energy was channeled in a positive way, there were occasional acts of violence. Some young campaigners participated in several attacks on members and supporters of the various parties. But these were the exception. Independent youth organizations such as Youngstars Foundation and Youth Initiative for Advocacy Growth and Advancement promoted constructive political participation through social sites, organized debates, and watchdog reports. Through these platforms the youth were able to voice their concerns.

After the election, I asked my childhood friend why he thought the youth were more involved in the election. "The youth want change," he said. "They are tired of watching old men loot from their nation's purse." His statement was not surprising. The lack of accountability has created a tradition of corruption in Nigeria, which limits its economic and social development. Since 1960, an estimated $400 billion has gone missing from oil revenues, while 90 percent of Nigeria's population lives on less than $2 a day.

A History of Nigerian Corruption

In the previous elections, politicians have been able to bribe their way to victory. Vote rigging, violence, intimidation, and bribery have become part of the election traditions, both at the federal and legislative levels.

The 2007 general election, for example -- which installed Jonathan as the country's vice president -- may have been the most corrupt in Nigeria's history.

Then-president Olusegun Obasanjo had initially promised to peacefully hand power over at the end of his second term. However, the ambitious leader sought to amend the constitution to enable him to run for a third term in 2007. After his plans failed, Obasanjo handpicked Umara Yar'adua as the candidate for the PDP.

The 2007 general election was doomed from the start. The Independent National Electoral Commission, established to oversee elections in Nigeria, complicated things by deciding that registration and voting would be carried out electronically even without reliable electricity. In addition, it failed to register many voters after extending the deadline twice, and it did not provide enough voting machines. The General Assembly rejected the INEC plan.

By the time of the election, 50 political parties were competing. There were reports of stolen ballots and bogus vote counts, especially in remote areas, as well as reports of bribery and intimidation by politicians and their supporters.

Nevertheless, Yar'adua was declared president of Nigeria after the controversial vote. His administration was short-lived due to his death in 2010. His vice president, Jonathan, took office as the interim president, successfully winning an election outright the following year. Once again, the election was highly controversial due to reports of ballot stuffing and speculation that the president had bribed northern leaders for their support. In post-election religious riots, 800 people were killed.

Given this recent history, the international community was skeptical about this year's election. The skepticism increased when, with one week to the election -- which had been scheduled for February -- INEC commissioner Attahiru Jega announced the postponement of vote until late March, saying that "it was a necessary step in order for the military to launch an operation to secure the northeast from Boko Haram and guarantee the safety of voters in the region."

Despite the threat of another rigged election, the efforts of the Nigerian youth in particular ensured a relatively smooth democratic transition.

At the same time, unemployment and security threats remain the two biggest concerns for the young population. According to the latest World Bank report, the youth unemployment rate is at 13.6 percent. However, this number is significantly underestimated. The Central Bank of Nigeria has reported that 80 percent of Nigerian youth are unemployed despite claims that millions of jobs have been created in recent years.

Security in the country remains unstable. Much of the threat comes from the north where Boko Haram, an Islamist terrorist group, has slaughtered more than 10,000 people since 2009. Buhari has promised to tackle these issues as soon as he arrives in office. He also promises to create 20,000 thousand jobs in Nigeria's 36 states and pledges to end the insurgency within months in office.

The youth are set to become more significant in future elections as the political process evolves, says Samuel Okey Mbonu, executive director of the Nigerian-American Leadership Council. "Once the political climate becomes freer, with parties having open political primaries as in the advanced democracies, all votes will begin to count, and you will see a greater influence by the youth, electing persons they recognize as having 21st-century credentials."

As Buhari prepares to lead the country, he should bear in mind that he is under the watchful eyes of Nigeria's young people. In my friend's words, "Nigerian youth have high expectations for the incoming government to rebuild the nation. The youth are expecting to see the new leader eradicate corruption and create new jobs for Nigerians. Only time will tell if they elected the right leader."