How to Reverse Nigeria's Oil Curse 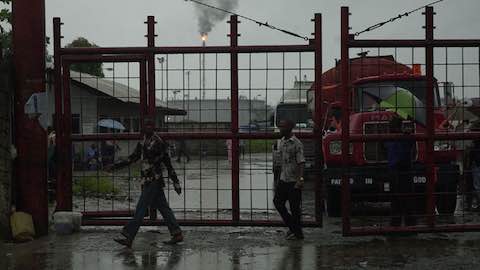 How to Reverse Nigeria's Oil Curse

Muhammadu Buhari can't clean up Nigeria's opaque and corrupt oil industry on his own. As Sarah Chayes sees it, the Nigerian president also needs the backing of the country's public and private sectors if he hopes to break the country's resource curse once and for all.

The inauguration of Nigeria’s new president, Muhammadu Buhari, sets the stage for an unprecedented alliance of public- and private-sector actors to perform something close to a miracle: reverse the ravages of the so-called oil curse.

The tough-minded ascetic, who was elected on an anticorruption platform, aims to clean up practices in his country’s notoriously opaque and criminal national oil company, the Nigerian National Petroleum Corporation (NNPC). If multinationals and Western governments join forces with Buhari, Nigeria could be transformed from an object lesson in how hydrocarbon wealth paradoxically cripples developing nations into a model for its resource-rich neighbors to emulate.

Of the world’s nearly 60 oil-producing countries, a mere half dozen have escaped the oil curse. As they discover oil -- and their governments discover the temptations of an unaccountable revenue stream -- other economic sectors wither. Unemployment rises. Corruption grows pervasive. Oil revenues are squandered on conspicuous consumption by members of ruling networks while populations become poorer. Alienated groups rebel.

Nigeria is a textbook case of this syndrome. A once-vibrant economy that included manufacturing, long-distance trade, and agricultural production so abundant that it fed much of West Africa has given way to an oil monoculture. Attacks and kidnappings in the oil-producing south have declined, to be replaced by whatofficials call industrial “bunkering” -- the theft of crude by the barge-load. Oil oozing from sabotaged pipes has poisoned precious marshland . On the other side of the country, the emergence of the Boko Haram insurgency can be partially ascribed to acute corruption and gross regional inequalities associated with Nigeria’s curse.

As a result, oil majors are jostling to unload their onshore holdings. In April, French giant Total sold off a Nigerian block for half a billion dollars, the latest in a series of divestitures that has been accelerating since 2010.

There was nothing foreordained in this outcome, and it can be reversed. It is in the interests of energy companies as well as the United States and other Western governments to help Nigeria’s new leadership do so.

Regardless of whether the NNPC is eventually broken up or wholly or partially privatized, Buhari -- a former oil minister -- can require and publish quarterly audits of its books. A long-awaited partial review by PricewaterhouseCoopers exposed multiple computational errors and omissions in the reporting of both costs and revenues so glaring that it was impossible to arrive at a consolidated profit and loss statement.

Buhari could blaze the trail for other oil-producing countries by mandating a standard contract form, civil society participation in negotiation and oversight of contract terms, and an end to opaque swaps of crude for refined petroleum products. Ironically, Nigeria -- Africa’s number-one crude oil producer -- imports gasoline from countries like the United Kingdom and the Netherlands. Four dilapidated refineries have lapsed into disuse. But in many cases, instead of selling crude for dollars and using the cash to buy kerosene and gasoline, the NNPC negotiates a trade -- crude for refined product. Such swaps, according to experts, offer significant opportunities for corruption. Even before rebuilding Nigeria’s own refining capacity, Buhari can require that all refined products be purchased in currency, and publish the accounts, so reported purchases can be compared with consumption figures.

With new appointments to the central bank, moreover, he can rid that institution of its current penetration by former NNPC officials and bankers who have been under scrutiny for their potential role helping launder tens of billions of dollars in pilfered oil revenues.

“As far as the constitution allows me,” Buhari promised in his inauguration address, “I will try to ensure that there is responsible and accountable governance at all levels.” To do so, he should ensure the Economic and Financial Crimes Commission (EFCC) is staffed by talented and determined investigators, resource it adequately, and enforce its independence.

To improve, as Buhari put it, the “dispatch” with which he expects the judiciary to act on cases of “corruption, serious financial crimes, or abuse of office,” a special tribunal might be required on a temporary basis to expedite EFCC cases and ensure their protection from political interference. Cracking down on corruption within the judicial branch as a whole, as he has promised, will be critical in the long term to improve government legitimacy and for countering extremists’ complaints of a justice deficit.

But Buhari can’t go it alone. Both oil companies and Western governments must help. For, with Africa’s largest economy, a burgeoning population, and significant political stature, Nigeria matters. Its fate will affect that of its neighbors, of oil companies, and of global security.

Though the bare thought of collective action discomforts the competitive energy industry, there are precedents for pooling efforts to counter challenges the whole industry faces. Oil majors have come together to share infrastructure or to pressure host governments on such issues as taxes or customs enforcement. Joint action is possible.

In this case, if companies pooled their investments to promote economic growth in agriculture and manufacturing -- in line with Buhari’s development goals and a provision of Nigeria’s draft petroleum industry legislation -- they might be able to help reverse recent economic de-diversification where individual efforts would not.

To justify this outlay, companies could share data on losses incurred due to oil-curse-related disruptions, to promote an accurate accounting of this syndrome. Currently, such risks and costs are not consolidated and systematically factored into risk analysis or investment planning.

Oil companies could provide enhanced disclosures to the Extractive Industries Transparency Initiative, of which Nigeria is a member. They could provide information on corrupt practices they have witnessed to the EFCC -- or to their home countries’ justice ministries.

The international community has a role to play as well. Calls by Western governments for free and fair elections helped make Buhari’s victory possible. Now they must help him fulfill his pledge to hold corrupt officials accountable. Where they possess sufficient information, they should suspend visas of egregious offenders and their families, launch asset forfeiture or even criminal cases, and order enhanced scrutiny of property purchases. Mechanisms recently brought to bear against FIFA officials can be applied to former government officials, too. Washington should expand its support for the EFCC, including financial resources if required, technical assistance and training, and, where appropriate, joint investigations and prosecutions.

As a first step, Western leaders, in the private as well as the public sectors, should resist the temptation to swiftly turn the page -- or even to make heroes of former president Goodluck Jonathan and some members of his administration for the swift concession of electoral defeat as the vote count was being completed or for purported efforts at reform. Though Jonathan’s gesture probably saved Nigeria bloodshed, it cannot make up for his administration’s epic looting of the public treasury. The March 2015 election did not constitute an amnesty vote. And it’s time the incentive structure that rewards official corruption began to change.

Sarah Chayes, formerly special adviser to the chairman of the Joint Chiefs of Staff, is an expert in South Asia policy, kleptocracy and anticorruption, and civil-military relations.