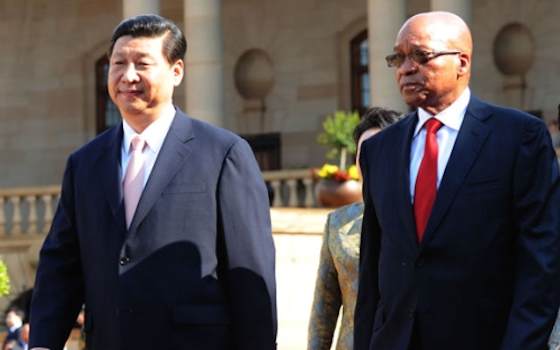 Over 40 African heads of states and governments traveled to Washington, D.C. to meet with President Obama and other U.S. government and business officials. While the media touted the U.S.-Africa Leaders Summit as a sign of Africa's "rising" and its soon-to-be key role on the world stage, the truth is quite the opposite. African leaders' love for summitry isn't a sign of a rising continent, but rather, a sign of confusion, weakness, and lack of direction.

While the old international political system, built by and centered on the hegemony of the Unites States and Western Europe, is slowly receding due to the "Rise of the Rest," Africa remains the rare part of the world still prey to geopolitical forces and wrangling. To some extent, things in Africa are still regularly dictated from afar. Military interventions and political lectures are not uncommon. When a genocide brews in Central African Republic, it is French troops that respond with "boots on the ground." And when girls are abducted in Nigeria, absurdly enough, African leaders meet not in Abuja but in Paris to discuss how to respond to the crisis. Major events to address Africa's crises hardly take place on the African soil. Rather, they are held in Washington, London, Paris, Beijing, and New Delhi. That can't possibly be a sign of "rising."

With the rise of China, India, Brazil, Turkey, and others, the current global governance system is devolving, moving away from a system of a single superpower--or a few superpowers--policing the rest of the world. Asia is becoming more assertive as its share of the global economy continues to rise while Latin America, led by Brazil and to some extent Mexico, is fairly independent of meddling from other countries. But Africa is still the chessboard continent where powers, even medium powers, vie for greater influence and access to resources. It need not be that way, if only Africa did the right thing. And it has not been that way in the past.

In the "good" old days of the 1960s, at the dawn of independence, African elites and intellectuals devised an Africa-centered worldview. Julius Nyerere of Tanzania came up with "Ujamaa;" Leopold Sedar Senghor of Senegal promoted "negritude;" Kwame Nkrumah with "Pan-Africanism;" While the visions and ideologies of these men weren't perfect, and failed in many instances, they had a view of the world anchored in Africa and supported by Africans. That is, in and of itself, important, and the ramifications that spring from it can't be overstated.

Africa today is different. We increasingly and unnecessarily view the world as binary: the West (North America and Western Europe) or the East (China). However, Africa doesn't need to choose between either. After three centuries of failed relationship(s) with the West--from slavery to colonialism to military interventions to political meddling--Africa is understandably tired and wants a peaceful divorce. But lately, it has become standard for African leaders and elites to criticize Western policies while comfortably relying on Western support in many areas. No, we do not need lectures on political systems nor the International Criminal Court nor aid with its many strings attached. Outside intervention, however, is only half the problem.

The West's signature pride is democracy, human rights, and liberal economic models. They follow these as ends in and of themselves. This very model is the source of outrage that African leaders express about the West: Why should anyone tell us how we should conduct our affairs and organize ourselves? The question is pertinent but incomplete as it leaves out an equally important one: Why do you seek help in the first place?

China's pride is its staggering economic rise which, anchored in state-capitalism and market planning, is creating seismic change in the global balance of power. But Africa is nowhere to be found in this model--with, African governments not known for either effectiveness or for efficiency. So as we scorn the West and embrace the East, we find ourselves following neither model.

This lack of direction and philosophical grounding has created a frenzied search for belonging by Africa's globetrotting elites--unsure of Africa's place in the world but unwilling to look to Africa itself. So we have ended up with summit after summit: China-Africa Summit, India-Africa Summit, EU-Africa Summit, Brazil-Africa Summit, Japan-Africa Summit, and most recently the U.S.-Africa Summit. And we can expect this list to expand as more economies elsewhere become vibrant and seek resources to power their growth.

We are told that these summits signify our "growing" role in the world and are meant to increase cooperation between Africa and other countries. We are told that Africa is finally taking off and ready for business, and that seems like enough explanation for any kind of summit. What is left unsaid, and more telling, is how these summits are organized and where they are held. All of them are held outside of Africa. Tens of African heads of states travel to a foreign capital to attend a given summit. They then make deals to sell resources, sign MOAs and make declarations of a new Africa era. None of these summits tackle the actual economic challenges of Africa: How to add value to its vast resources and how to diversify its economies.

All of that is not a sign of a rising continent. It is weakness at best, and demeaning at worst. Africa needs not look West or East, but inwards. Africa's elites and intellectuals need to rediscover what Senghor and Nkrumah and Nyerere fought for, a world centered on national self-reliance. It is about giving yourself dignity and demanding that others do so.

In a world as it should be, that dignity obliges that Messrs. Obama, Xi, and Putin, or whoever wants relations with Africa, travels to Addis Ababa during the annual retreat of African leaders to discuss whatever is on their minds. If Africa is ready for business, it surely should be open for summits meant to promote business in Africa.

But even in the world as it is Africa fears nothing as much as the ghosts of the past. Someone just needs to stand up and heed the ancient, time-tested wisdom in this African proverb: "When there is no enemy within, the enemies outside cannot hurt you."