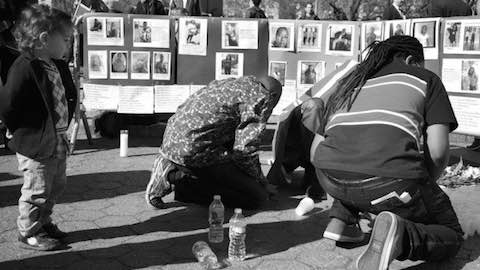 Sadly, innocent Kenyans are paying the price for their government's actions in Somalia.

The old anti-war song, “Where Have All the Flowers Gone?” has the refrain “When will they ever learn?” That’s what came to mind after al-Shabaab’s ghastly April 2 assault at Garissa University in northeastern Kenya, not too far from the Somali border. The attackers killed nearly 150 people.

This wasn’t just a security failure -- in part, it was blowback. Sadly, innocent Kenyans are paying the price for their government’s actions in Somalia.

When the Kenyan military invaded the country back in 2011, there was almost no discussion or consideration of the possible consequences. Like the Americans in Afghanistan and Iraq, they seemed to think that as the stronger power, with superior training and resources, the fight would be all theirs.

But that’s not how al-Shabaab fights.

In July 2010, the group had killed at least 74 Ugandans in a bombing attack on people watching the World Cup soccer final in Kampala. The Kenyan government therefore should have been well aware that al-Shabaab would not engage them in frontal attacks on conventional forces, but rather on soft targets that allow a few armed men to create havoc.

Since Kenya's invasion of Somalia, there have been dozens of attacks in Kenya claimed by al-Shabaab. This has resulted in the deaths of over 600 Kenyans, the wounding of many more, and the rampant destruction of property. Foreign tourism has plummeted, leading to an economic slowdown -- particularly in the beach tourism on Kenya's famed eastern coast.

In turn, Kenya has tightened security. Now everyone, for example, is searched when they enter a supermarket. I’ve always grimly wondered what those security guards would do if someone really tried to storm a market with guns. At Garissa, the guards at the gate were easily killed by the attackers. Kenya is filled with such soft targets.

The response of the Kenyan government is to hire more policemen -- by any means necessary.

Ten thousand recruits had gone through the hiring process, but the High Court ruled last year that too much corruption was involved in the hiring process. After Garissa, President Uhuru Kenyatta overruled the courts so that these tainted recruits can be brought aboard.

There’s an additional proposal circulating to build a wall on the border between Somalia and Kenya.

Kenya is also making a show of escalating its military response. A few days after the university attack, Kenya's warplanes bombed two supposed al-Shabaab camps in northwestern Somalia. Witnesses said the chief casualties were civilians, livestock, and water wells -- and denied that there was any al-Shabaab presence in the area. Such reports are quite common for Kenya’s bombing raids on the country.

These are simplistic responses to show that the government is “doing something.” Neither will address the fundamental insecurity posed by al-Shabaab.

Roots of the Problem

Echoing a familiar pattern, it was intervention by the United States that created al-Shabaab.

In 2006, most of Somalia was ruled by the Islamic Courts Union (ICU). Deeming the ICU too Islamist for its taste, Washington arranged for Ethiopia to invade Somalia to overturn this government. This resulted in the most radical elements in the ICU creating al-Shabaab, which fumed against the hated Ethiopians and their American sponsors. The Ethiopians soon withdrew, leaving much of the country to al-Shabaab.

Kenyan troops invaded Somalia in 2011 and continue to occupy a southwestern section of the country. That occupation has prompted considerable criticism.

Since Kenya’s 6,000 or so soldiers are insufficient to govern the territory they control, they’ve made an alliance with the Ras Kamboni militia, which had formerly been part of the Islamic Courts Union. There are reports that the Kenyan military has benefited from the charcoal trade to the Middle East, including working with al-Shabaab itself for charcoal supplies from the hinterland. Other reports of corruption and human rights abuses by the Kenyan military have surfaced as well. As a result, the local Somali population has seen no improvement in their governance.

But Kenya has a Somali problem within its own borders as well. The 2009 Kenyan census listed nearly 2.4 million ethnic Somalis living in Kenya, which was then about 6 percent of the population. Many of these are Kenyan-born citizens. Others, though, are immigrants and refugees, and it’s almost impossible to tell the difference -- fake documents, if needed, are easily obtained.

There’s considerable ethnic hostility and discrimination against Somalis in Kenya, including a dark history of pogroms and mass murders by Kenyan authorities. All this has led to fertile recruitment by al-Shabaab among the Somalis in Kenya. While the four attackers at Garissa University probably came across the porous border, some of the other terrorist attacks have originated from within.

Unfortunately, the Kenyan authorities’ response to these attacks has only worsened conditions for Kenyan Somalis.

In February 2013, the government rounded up 34,000 residents from the Somali area of Eastleigh, Nairobi and “housed” them in a football stadium. The major accomplishment of this exercise was further alienation of the Somali population. There have also been calls to close the Dadaab refugee camp in eastern Kenya and force the Somali refugees there into a new camp in the area of Somalia controlled by the Kenyan military.

Most recently, Kenya has cracked down on the remittances that Somalis in Kenya send to their relatives in Somalia, threatening to cut off some $70 million per month that many Somalis desperately rely on.

There needs to be two steps to solve the continuing terrorist threat in Kenya.

First, the Kenyan military needs to withdraw from southwest Somalia. Three-and-a-half years after the invasion of Somalia, some Kenyans have finally begun to question the wisdom of the invasion and consider the possibility of withdrawal. After the Garissa University massacre, opposition leader Raila Odinga recommended just that.

The second, much harder step is for all Kenyans -- especially including those in the government -- to listen to the concerns of the Somali people. Hostility and discrimination against Somalis must end and affirmative action policies should be put in place to counter their marginalization in the country. This should include the devotion of resources to develop the long-neglected area of northeastern Kenya where many Somalis live. It will also mean challenging prejudices and demanding accountability for past atrocities, such as the 1984 Wagalla massacre that killed thousands.

For now at least, peace in Kenya is a long way away. While many shortsighted responses are being implemented, no long-range strategy is even being discussed. Sadly, Garissa will likely not be the last tragedy of its kind.