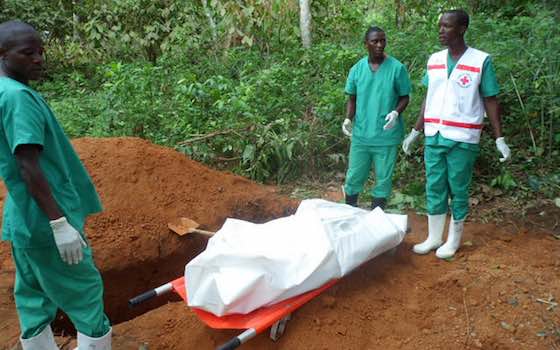 Now that the election season in the United States is over, and conservative Republicans and their right-wing talk show hosts on FOX news and the like can no longer stoke up fear on the issue, the West Africa ebola epidemic, which is getting worse, has essentially all but disappeared from the news here in the United States.

It ain't over by a long shot. Far from it. The most recent news remains troubling. As an NPR news story noted, "New cases continue to rise exponentially."

According to the latest reports, the ebola virus death toll in West Africa is now approaching 6,600 with an estimated 18,000 people reported cases. After claiming that the virus had been brought under control at least in Liberia and Guinea, now it appears to be gaining strength again in Sierra Leone where the government is reporting more than 100 new cases a day. The latest known outbreak has taken place in the rural areas of Kono, the country's most eastern province just on the border with Guinea. In the past few days (December 13, 2014) "at least 87 people had died and been hastily buried, often without the precautions needed to stop the corpses from infecting the living".

World Health Organization (WHO) spokeswoman, Winnie Romeril, indicated the situation was getting worse with the sick and dying flooding the district's one small health facility, its staff exhausted from overwork. If not contained, early dire estimates suggested that the current outbreak could affect as many as 1.4 million West Africans before it runs its course. The economic costs both already suffered and those forecast are on a very large-scale. According to the Financial Times (Dec 12, 2014), the virus has already cost these three affected countries some $3-4 billion. That is just the beginning. An earlier World Bank estimate concluded that the total negative financial impact could hit has high as $32.6 billion.

Home to some 365,000 people, in part because it is rich in diamonds, Kono Province was among the regions hardest hit by Sierra Leone's recently ended civil war during which time it was heavily fought over and looted. Although the home of many ethnic groups, "Kono" is both the name of the district and of a major ethnic group that resides in the region. The Kono, who have their own language, are mainly diamond miners and farmers. Besides mining alluvial diamonds, they grow rice, cassava, corn, beans, groundnuts, sweet potato, peppers, cassava leaf, greens, potato leaf, etc. as their main crops, along with banana, pineapple and plantain, and cash crops such as cocoa, coffee and kola nut. Its population dropped to its present figure from more than 600,000 prior to the outbreak of fighting.

Ebola: one of many diseases of poverty

Ebola is a classic example of where International Monetary Fund structural adjustment programs emphasizing cuts in government spending, including health care converges with greater outbreaks of all kinds of infectious disease, especially in poor countries. Repeatedly, medical experts have explained, that while a potentially deadly virus, that ebola can and should be easily contained by quarantine and isolation, if proper medical care facilities and procedures are in place. Early detection, isolation and some form of antibody build-up program have all been cited as important factors in limiting the seriousness of the outbreaks. Unfortunately the conditions for defeating the disease do not exist in the West African countries so far most affected: Guinea, Liberia and Sierra Leon.

"The big problem where it's (ebola) most prevalent, Sierra, Liberia and Guinea is that these are very poor countries where the infrastructure has been increasingly ripped out especially in terms of health systems and the virus is now in urban areas where there is close human contact. This makes it very difficult to control and contain especially when this is happening in areas where there is a lot of overcrowding, poverty and poor sanitation."

In another interview, Dr. Pollock notes that people in Europe and North America bombarded with scare tactics emanating from the outset from right-wing talk radio and like sources are hardly at risk and should not be worried. She notes that ebola is one of many diseases of poverty:

"We should be worried for the people of Africa and their desperate plight, but not for ourselves -- we are more likely to die of influenza or a stroke or of a road traffic injury. People in Africa are dying from the many diseases of poverty, and ebola is just another one to add to the list. Like all diseases of poverty, ebola accelerates poverty and economic hardship, because the women and breadwinners die and because of its impact on economic activity. West Africa is facing a humanitarian crisis of extraordinary proportions: one in ten children die before the age of ten, almost half of all children are malnourished and stunted, and one in seven women are dying in child-birth. The problem is absolute poverty, and fragile states hollowed out by civil wars and displaced populations and decades of exploitation by the west of their natural resources."

Pollock gives a vivid sketch of Liberia's "health care system", which is hardly that. "Health care facilities have been degraded. In Liberia, with a population of 4.7 million, there are fewer than 100 doctors and 1,000 nurses (compared with the tens of thousands in western countries of similar size). There are almost no beds, and supplies such as re-hydration, barrier nursing equipment, and protective clothing are almost non-existent." Referring to ebola as not a natural disaster but as a result of "the terrorism of poverty," Paul Farmer elaborates on the same theme, noting "That's one physician per 100,000 population, compared to 240 per 100,000 in the United States or 670 in Cuba." notes that in Sierra Leone there are 136 doctors for a population of six million. The situation in Sierra Leone is about the same, with 136 doctors serving a population of about 6 million.

The economies of all three effected countries are quite similar.

Although possessing considerable economic potential and natural resources in demand, they are all -- to use the American expression -- dirt poor, peripheral providers of raw materials and basic food stuffs to the global economy's more prosperous core nations. Regardless of what index for world poverty one applies, Guinea, Liberia and Sierra Leone are found at the bottom of the heap. All have a history of colonial and neo-colonial extreme exploitation that continues through today. For example according to the United Nations Development Index, (UNDP) out of 187 nations compared, Guinea ranks 179 (down from 178 year ago), Liberia 175, and Sierra Leone trails even these two neighbors with a 183 rating (up from 184 a year ago). The only four other countries that come in lower than Sierra Leone are Chad, the Central African Republic, the Democratic Republic of the Congo and at the very bottom Niger. This UNDP index is a cocktail of life expectancy, years of schooling, and gross national income.

The three West African countries where ebola continues along its deadly path are caught in what is a global offensive to privatize healthcare parallel to the efforts to do likewise in education. The marriage of the general global thrust of neoliberal economic policies with World Bank -- IMF structural adjustment programs have hit Africa's poorer countries -- needless to say some of the world's neediest, especially hard. The partial privatization of healthcare in many European countries that had extensive, free state-funded healthcare is more than matched by its near total collapse among the world's poorest countries, especially in sub-Saharan Africa.

The erosion of public sector support in African countries is nothing new. It has been proceeding apace since the early 1980s as harsh structural adjustment programs insisting on the cutting of public funds in exchange for desperately needed loans began apace. As African healthcare systems collapsed, their health infra-structure decimated by the cuts combined with poor nutritional diet to erode resistance to disease among affected populations. This has been the fate of Guinea, Liberia, and Sierra Leone. Add to this social cocktail, political instability, rampant corruption, repression and civil war -- much of it in the service of foreign economic interests one way or another, and hidden dimensions of the health care crisis in these countries becomes clearer -- as does the path for addressing the crisis.

What is needed is precisely opposite to what is actually happening. Rather than strengthening the state's ability to address the healthcare system through increased funding targeting education, developing long-term health infrastructure, the state's role and funding base is increasingly weakened. The results should not be surprising (and aren't). Having contributed, through their policies, to create the conditions of crisis in the first place, the "global community" -- the World Bank, IMF, the Bill Gates Foundation and other NGO's, and governments of the world's richest countries, respond to the current ebola epidemic in a classic and self-serving fashion with emergency aid -- bandaid solutions with a goal of keeping African health care privatized and thus crippled.

Plans to build public healthcare systems, which cannot be constructed overnight are hardly even considered, or if they are, are not funded. Instead, dramatic and highly publicized "emergency aid" is promised and usually provided in much smaller doses than promised. The contrast in approaches is vividly expressed in the activities of different countries. Cuba, the unsung hero of the day, sends hundreds of healthcare workers of all types, doctors, nurses, healthcare specialists. As Michael McNeal, colleague at the University of Denver notes, "the Obama Administration, declares ebola a security emergency and sends 3,000 troops (to do what?) with little to no training in dealing with such crises. Furthermore, Washington has quietly scaled back its plan to build the seventeen 100-bed clinics around Liberia (only two are nearing completion now), and noises about a victory have been made following what appears to be a decrease in cases there. However, some experts have suggested that the epidemic is still raging in isolated parts of the country (Liberia) where the ill cannot get to clinics to be assisted and counted."

Accompanying that is the mad race to find the magic vaccine bullet, both a profitable venture for the companies that succeed and good public relations at a time when these companies are increasingly coming under attack for what amounts to rapacious behavior. The failure to begin laying the ground work for improved health care infrastructure insures that overall health care and nutrition will remain poor, the populations susceptible to further outbreaks.