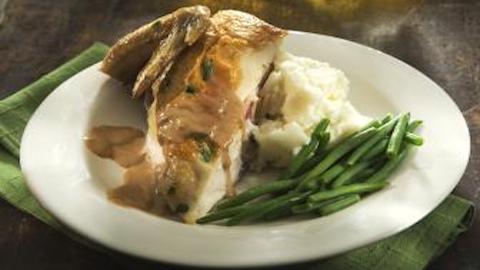 You know a recipe you've cooked is a classic when people remember it and crave it years, or even decades, after they first ate it. That's what happened with me recently when an old friend, a business mogul who had lived in London for many years and just moved back to California, stopped by for dinner at Spago in Beverly Hills.

"Can you make me that chicken you used to make with the whole-grain mustard sauce?" he asked.

I paused a moment, then told him I didn't remember ever serving such a dish at Spago.

Well, I left Ma Maison back in 1981 before opening the first Spago early the following year. That's a long time for someone to remember something they'd eaten. Fortunately, I have a good memory for things I've cooked, so I knew what dish he was referring to, and I was happy to cook it for him.

One of the best things about that chicken recipe, apart from its memorable taste, is how easy and inexpensive it is to make, even at home, whether you prepare it for a special dinner party or even a weeknight family meal.

What makes the recipe a classic? First, it's the way the chicken is cooked. For roasting, I always like to butterfly a whole chicken, cutting out its backbone and flattening it, a simple process I describe in the recipe I share with you here. Then, I brown the chicken skin-down in an ovenproof skillet before finishing the cooking in the oven. The result is a beautiful, evenly cooked bird with crispy, golden-brown skin. For the best flavor possible and the most healthy and responsible approach to cooking and eating, by the way, I also try whenever possible to use organic free-range chickens.

Then there's the sauce. It's really simple to make, a quick reduction of port wine and chicken broth. You don't need to use an expensive bottle of port, either; any domestic or imported tawny or ruby port will do fine. Next, the sauce is enriched with a little cream and, finally, the whole-grain mustard (in the style of Meaux, France, available in most food stores) and some Dijon mustard are stirred in at the last minute, naturally thickening the sauce. Just be sure to reduce the heat to low before you add the mustard, so it will blend smoothly and won't form clumps.

That's all there is to it. And the result is a roast chicken that will linger in the memories of the people who eat, and give you the reputation of a wonderful cook capable of creating a kitchen classic.

Preheat the oven to 400 degrees F.

Meanwhile, butterfly the chicken. With poultry shears or a sharp knife, very carefully cut along the ribs on both sides of the backbone to remove it. Spread out the chicken, skin up, on a clean work surface and press down firmly with the heel of your hand to flatten the chicken.

Over high heat, preheat a heavy ovenproof skillet large enough to hold the flattened chicken. Add the olive oil and swirl it in the skillet. As soon as you begin to see slight wisps of smoke, carefully place the chicken skin side down in the skillet. Sear the chicken, undisturbed, while reducing the heat little by little to medium, until its skin has turned golden brown and crisp, 5 to 7 minutes. With tongs or a large fork, carefully turn the chicken skin side up.

Transfer the skillet to the oven and roast until the chicken is deep golden brown and the juices run clear when the thickest part of the thigh is pierced with a skewer, 10 to 15 minutes. When the chicken is done, transfer it to a carving board, and cover with aluminum foil to keep it warm.

Stir in the cream, bring the liquid back to a boil, and cook for about 3 minutes. Reduce the heat to low, stir in the Dijon and Meaux mustards, and adjust the seasonings to taste with salt and pepper.

With a heavy knife, cut the chicken into serving pieces. Return the chicken pieces to the skillet, spoon some of the sauce over them, and sprinkle with parsley and tarragon before serving.