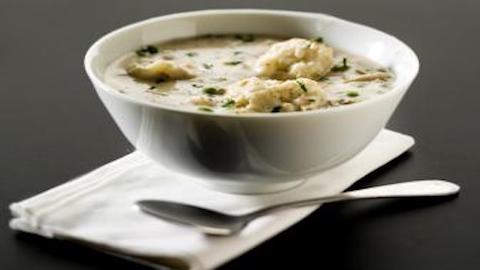 A recipe worthy of a main-course meal

Sometimes I think people worry too much about labeling what they eat, a habit that can limit the pleasure we get from food. Since an omelet is a breakfast dish, for example, many people think twice about eating one for lunch, even though that's a respectable thing to do in a French bistro. Labels can confuse us as much as they help.

That's especially true when it comes to soups and stews. There's a hazy overlap between the two categories, a point at which eaters might wonder whether a light stew is really a soup or a robust soup is actually a stew. After all, the reasoning goes, soups are first courses, and stews are main courses.

I'm a firm believer in eating what seems good to you for any given purpose at any given meal, regardless of what it might be called. And a perfect example is my recipe for a main-course Chunky Chicken Pot Pie Soup.

Yes, I call it a soup, mainly because I like to serve it in a soup bowl. But the soup is so chockfull of chicken and vegetables, all coated in a thick and creamy broth, that if you ladled it into shallower bowls or plates you could be forgiven for swearing it was a delicious stew.

The secret to developing that good flavor is to first saute its base mixture of aromatic vegetables -- leeks, onions, celery, and garlic -- and then simmer them gently and slowly along with the chicken breast, carrots, mushrooms, peas, and pearl onions.

The broth you choose for simmering also makes a big difference. Look for the best-quality, preferably organic canned broth (or larger-volume cartons) you can find. Choose one that doesn't have too much sodium, so you can adjust the seasonings to taste after the soup has simmered and concentrated in flavor.

As well as the reduction that happens during simmering, the soup's thick, creamy consistency also results from some flour sprinkled into the sauteed vegetables; and from some cream stirred in toward the end of cooking. Of course, you can leave out the cream if you'd like a lower-fat soup.

The final element, which helps transforms it into a full-fledged main-course dish, is dumplings that are cooked separately in a little broth and then added to the soup at the last minute. If you prefer, you can make your favorite biscuit recipe, baking them and placing one or two on top of each bowl at serving time.

Of course, dumplings or biscuits make labeling this recipe even more confusing, turning it into the pie that it's traditionally named. Which shows you even more clearly how meaningless such nametags are. After all, whatever you call it, it's just plain delicious.

First, prepare the soup. In a large stockpot, heat the olive oil over medium heat. Add the leeks, onion, celery, and garlic and saute, stirring occasionally, until just softened, about 7 minutes. Sprinkle and stir in the flour and cook, stirring constantly, for 2 minutes, taking care not to let the flour brown.

Remove the pot from the heat and, stirring constantly, slowly pour in 6 cups of the broth. Add the carrots, mushrooms, peas and onions, chicken, 1 teaspoon of salt, the tarragon, and the white pepper. Return the pot to medium-high heat and bring to a boil, stirring occasionally. Reduce the heat to maintain a gentle simmer, cover the pot, and cook until the chicken is done and the vegetables are tender, about 30 minutes.

Meanwhile, put the remaining 2 cups of broth in a separate shallow saucepan and add 1 cup of cold water. Bring to a boil over medium-high heat.

Reduce the heat under the boiling broth to maintain a simmer. Using a greased teaspoon, gently scoop up rounded teaspoons of the dough and carefully drop them into the broth. Cook until the dumplings are well risen and cooked through and float on the surface, about 7 minutes. Keep them warm in a small amount of the broth until ready to serve, reserving the remaining cooking liquid.

Before serving, stir the cream into the soup. Adjust the soup's thickness, if necessary, by stirring in some of the broth in which the dumplings cooked. Taste the soup and add more salt to taste, if necessary. Add the cooked dumplings, raise the heat under the soup pot to medium, and heat through until the soup is almost but not quite boiling.

Serve the soup immediately, ladling it into large warmed bowls and arranging the dumplings on top. Garnish each bowl with extra parsley.