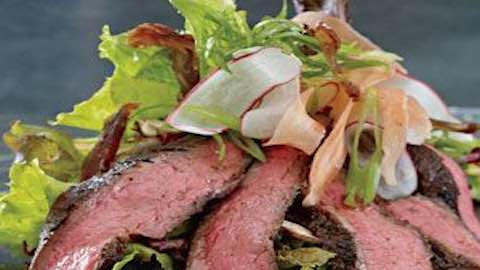 Deep in the hottest days of summer, many people shy away from eating beef. It's just too heavy to eat, they think, when the heat and humidity are already slowing you down.

My answer to that dilemma, however, is to eat good beef in the lightest, coolest way possible: quickly pan seared, chilled in a marinade full of lively flavors, thinly sliced, and served with a crisp, cold salad.

My chefs and I take our inspiration for this kind of beef dish from Japan.

Anyone who frequents Japanese restaurants probably knows a dish called tuna tataki, barely seared sushi-grade tuna marinated in a mixture of Japanese sake, the nation's popular wine-like beverage, rice vinegar, and finely grated ginger. (In fact, the word tataki means "pounded," a reference to the ginger, though some people think it describes the thinness of the tuna slices.)

That sort of treatment also works really well with beef, and has become a popular dish in many of my restaurants, including the Wolfgang Puck Bar and Grill at the MGM Grand in Las Vegas.

I use a good, flavorful steak from a chewier cut that will benefit well from the tenderizing effects of marinating and thin slicing. Flatiron steak, flank steak, or skirt steak are all good, although I prefer flatiron, cut from the shoulder section, because it's leaner and gives you broader slices that look good on the plate. I also like to sear the steak only just long enough to develop a flavorful surface while leaving it very rare in the center. But the recipe also works well with steak cooked as much as medium-rare.

The basis of the tataki marinade, as I've mentioned, is Japanese sake, which highlights the natural sweetness of beef. It's easy to find in well-stocked liquor stores, and you don't need to buy an expensive bottle. The mirin and rice vinegar in the recipe can be found in the Asian foods section of almost any market. And most supermarket produce sections today carry the big, mild white Japanese radish called daikon, featured in the salad, along with wispy daikon sprouts. If you can't find either, substitute thinly sliced red radishes for the fresh, light, colorful salad that complements this coolest of summer beef dishes.

Serves 4 as a main course, 8 as an appetizer

In a medium skillet, heat the olive oil over high heat. When it is almost smoking-hot and flows easily when you tilt the skillet, carefully add the steaks and sear them until nicely browned, 2 to 3 minutes per side. Remove the steaks from the heat and leave them to cool to room temperature.

Meanwhile, put the sake, mirin, soy sauce, ketchup, honey, garlic, ginger, coriander, and cinnamon stick in a small nonreactive saucepan. Bring to a boil over medium heat, stirring occasionally. Remove the pan from the heat and leave the mixture to cool to room temperature.

Pour the cooled marinade into a nonreactive shallow baking dish or bowl large enough to hold the steaks in a single layer. Add the steaks, cover the dish, and leave to marinate in the refrigerator for at least 4 hours or overnight.

Remove the steaks and marinade from the refrigerator. Take the steaks out of the marinade, reserving the marinade. On a cutting board, use a sharp knife to cut them across the grain into very thin slices.

Arrange the salad on individual serving plates. Fan the steak slices on top of the salad and drizzle some of the marinade on top, if desired. Serve immediately.