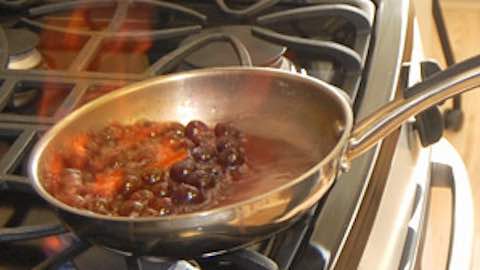 I love the juicy stone fruit that arrives with the warm weather. It doesn't matter whether it's cherries, apricots, peaches, nectarines, plums, or any of the other many varieties and hybrids you find in farmers' markets. If it sends sweet juices dribbling down my chin, I want to eat it!

Cherries, appearing abundantly in the markets around now, are the first real fresh stone fruit of the season. They're even more precious because their season is just a few weeks. But we cherry lovers certainly eat our fill during that time.

When you have fresh fruit this delicious, you really don't need to enhance it with too much cooking. Usually, just rinsing it with cool water and putting it in a bowl does nicely. Sometimes, though, it's fun to do a little bit more to highlight the dazzling color, flavor, and texture, like putting it into a fruit salad, cobbler, or pie.

Or you can literally take a page out of the book of the great French chef Auguste Escoffier and make Cherries Jubilee.

The Cherries Jubilee recipe gets its name because Escoffier, who headed the kitchen at London's Savoy Hotel in the late-19th century, created it for the "Golden Jubilee" 50th-anniversary celebration of the reign of Queen Victoria in 1887. The beloved monarch was known to adore cherries, so Escoffier elaborated on a long-held European tradition of preserving cherries with sugar and brandy, instead simmering the fresh fruit in syrup and then thickening the juices with arrowroot. He presented the cherries with the final flourish of a splash of liquor, showily ignited at the table. The chef immortalized the recipe in his cookbook Le Guide Culinaire, published in 1903, where it appears as "Cerises Jubilee."

The original Cherries Jubilee recipe version lacked the vanilla ice cream over which Escoffier himself later ladled the flaming cherries in his restaurant. Served this way, Cherries Jubilee became a staple of tableside cooking in fancy restaurants half a century ago. Many ambitious amateur cooks tried it at home, too, during the 1950s and 1960s.

Today, Cherries Jubilee has rightfully earned its position as a classic dessert recipe. I like to make a more streamlined Cherries Jubilee recipe version, though, that doesn't require preparing a simple syrup in advance or thickening the sauce. Instead, I just melt a little butter, caramelize some sugar in it, and then quickly saute the cherries until they start to give up their juices. If you like, at the last minute you can add a splash of the cherry brandy known as Kirsch, or orange-flavored Grand Marnier, and carefully ignite it with a long wooden kitchen match.

Ladle the fruit and its flaming juices over bowls of vanilla ice cream and you're ready to have your own jubilee celebration of summer fruit.

Reserve 4 perfect-looking cherries with their stems on.

Scoop the vanilla ice cream attractively into 4 serving bowls. Put the bowls in the freezer.

In a medium saute pan, melt the butter over medium heat. Sprinkle in the sugar and stir it until it combines with the butter and begins to melt. Continue cooking the syrup until it begins to take on a little light golden color, 1 to 2 minutes more.

Add the pitted cherries to the pan along with any juices that have collected in the bowl. Saute the cherries, stirring frequently, just until they begin to soften and give up some of their juices, 3 to 4 minutes. Stir in the lemon juice and lemon zest.

Remove the bowls of ice cream from the freezer.

If you would like to flambe the Cherries Jubilee, carefully sprinkle the Kirsch or Grand Marnier over the sauteed cherries. Light a long wooden kitchen match or fireplace match. Keeping the match and the saute pan safely clear of any flammable objects, carefully hold the burning tip of the match just above the surface of the pan's contents to ignite the vapors.

While the blue flames are still visible in the pan, carefully spoon or ladle the cherries and their sauce over the ice cream in each bowl and present the bowls to guests. As soon as the flames vanish, top each serving with a dollop of the whipped cream, if you like, and garnish each serving with a reserved stem-on cherry and a mint sprig.