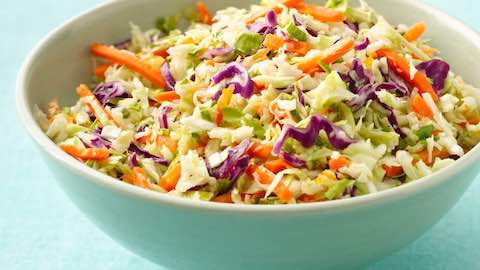 Let's face it: No matter how much anyone tries to get creative with the foods they cook on their outdoor grill, most of the time backyard cooking comes down to the good old standbys of hot dogs, hamburgers, and occasionally chicken or ribs. That's especially true for major summer cookout occasions like the Fourth of July, when there are other big distractions like neighborhood parades, ballgames, swimming, and fireworks.

That's why I consider side dishes such an important part of backyard entertaining. Made in advance and fairly easy to prepare, these are the recipes that let creative home cooks excel in the open air. After all, anyone can sprinkle salt and pepper on a hamburger. Not everyone, however, can produce a side that has people coming back for seconds and thirds.

So I'm happy to share with you some of my own favorite secrets for great summer side dishes, with two slightly unusual, and unusually good, versions of the classics: coleslaw and potato salad.

When it comes to coleslaw, I like to play around with the seasonings that flavor this popular side, which originated in Holland. (The name translates from the Dutch literally as "cabbage salad.") One of my favorite versions adds an Asian edge to the traditional mayonnaise dressing, with some sharp rice-wine vinegar, nutty-tasting Asian-style toasted sesame oil, and a touch of honey. What better way to reflect the great American melting pot on our most patriotic occasion?

Speaking of that melting pot, I grew up eating potato salad all the time in my native Austria, and was delighted to find that it was a mainstay of barbecues in my new home in America, where I've become a citizen. A side dish featuring spuds is always a must for me when I'm dining outdoors.

I like to use small, waxy potatoes for potato salad, since you can easily dice them or slice them after cooking and they retain their shape in the salad rather than turning into mashed potatoes like more mealy-textured baking potatoes would. Red-skinned potatoes look especially beautiful in a potato salad, particularly with their all-American color for July 4th. But instead of cutting them up for this recipe, which you can certainly do if you prefer, I suggest using the smallest red potatoes you can find and, after they have cooked and cooled, simply smashing them by hand into rough pieces. The variety of textures you get is enjoyable, and the rustic look is great for a relaxed outdoor occasion.

Relaxing, after all, is what you want to do on Independence Day, or any time you cook outdoors. I hope you'll use my two easy side dish recipes to bring more of life's simple pleasures to your summertime entertaining.

With a large, sharp knife, cut the head of cabbage in half lengthwise. With a smaller, sharp knife, carefully cut out the solid white core from the bottom of each cabbage half. Place each half flat side down on a cutting board and cut crosswise into thin slices to yield thin strips of cabbage leaf.

With the small holes on a shredder grater or the shredding disc of a food processor, cut the carrot into long, thin shreds.

Cut the scallions into 4 equal pieces each; then, cut each of the pieces lengthwise into thin strips.

Put the cabbage and carrot strips in a large mixing bowl. Add half of the scallion strips, reserving the remainder.

In a small mixing bowl, stir together the mayonnaise, rice wine vinegar, honey, and sesame oil. Pour this dressing over the cabbage mixture, toss thoroughly, and season to taste with salt and pepper.

Cover the mixing bowl with plastic wrap. Put the bowl in the refrigerator and chill for at least 30 minutes. Before serving, toss the slaw again.

Put the potatoes in a pot of lightly salted water. Bring to a boil over high heat. Continue boiling the potatoes until they are tender enough to be pierced easily by the tip of a small, sharp knife, 15 to 20 minutes depending on their size. Drain the potatoes and let them cool to room temperature.

In a large mixing bowl, stir together the mayonnaise, Dijon mustard, onion, celery, and salt and pepper to taste. With your hands, coarsely crush the cooled boiled potatoes into the bowl. With a large spoon, stir the crushed potatoes into the mayonnaise mixture. Stir in the parsley. Taste the salad and, if necessary, adjust the seasonings with a little more salt and pepper.

Cover the bowl with plastic wrap. Refrigerate the potato salad until serving time.