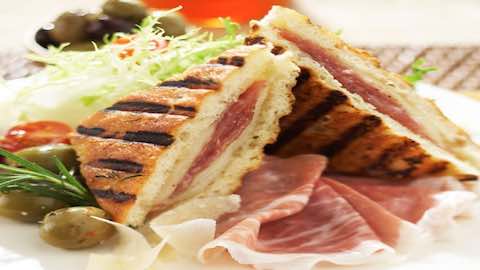 My little boys are happy eaters when I prepare these easy treats. So are my two teenagers; in fact, my oldest son, who's at college, cooks them in his dorm when he wants a snack or doesn't like what the dining hall is serving.

Before you imagine him dangerously heating a skillet on a hotplate on his desk, though, I have to add that what he's really making for himself and his college friends are actually panini, using a safe countertop double-sided electric panini maker.

Panini (the word means "little breads") are, in fact, nothing more than Italian-style grilled cheese sandwiches. What's the difference? Not much, really. But the small details open up a wealth of creative possibilities.

My friends tell me that their parents made grilled-cheese sandwiches by pan-frying white bread and American cheese in melted butter. Some remember their moms or dads adding other kinds of cheeses or maybe some bacon or sliced ham. For an extra-crispy sandwich, they'd press down hard with the spatula, which flattened and spread out the bread, increasing its crunchy brown surface.

A panini maker does that for you, since its heavy heated top portion squashes and seals the sandwich. And the Italians have devoted centuries of culinary creativity to making panini delightfully varied.

First, there's the bread. You can make panini with a rustic white Italian loaf or sourdough, sliced square ciabatta rolls, or pieces of the chewy seasoned flatbread called focaccia. Or use whole-wheat or multigrain bread, cinnamon-raisin, rye, pumpernickel, or a rich egg loaf like brioche or challah.

Next comes the filling. Good melting cheeses help seal panini, and you have a world of choices, from American or English Cheddar to Dutch Gouda, Swiss Gruyere to Italian mozzarella or Fontina. For extra flavor, add some dry or crumbly cheeses such as Parmesan, blue cheese, or feta.

I also love to add thin slices of meats and vegetables. Prosciutto, shaved ham, and crispy bacon are great; so are other options, including thinly sliced roast beef, smoked salmon, or shredded barbecued chicken. Slivers of onion, roasted chilies, sliced tomatoes, or sun-dried tomatoes add their own personalities. So do tender, flavorful fresh herbs like basil or chives, and condiments such as mustard.

Speaking of condiments, I'll share one of my favorite tricks for panini. Instead of cooking them in butter or olive oil, I spread the outsides of the bread with mayonnaise. Under the high heat and pressure of a panini maker, or a stovetop press improvised with two skillets as described in my recipe, the egg-based spread gives the sandwich a beautiful golden color and extra-crispy texture.

The results will be indescribably delicious, yet comfortingly reminiscent of your childhood. After all, it's really just a grilled-cheese sandwich!

Preheat a panini maker, a double-sided electric countertop grill, or a grill pan or heavy skillet.

Meanwhile, brush both sides of each slice of bread with the mayonnaise, olive oil, or butter. On one of the slices, assemble the sandwich filling in even layers: first the smoked Gouda cheese, then the prosciutto, followed by the onions, tomato slices, Fontina, and the second bread slice.

Cook until the sandwich is crisp and deep golden brown on both sides, 3 to 4 minutes total cooking time in a panini maker or doubled-sided grill. If you're cooking the sandwich in a pan on the stovetop, after 3 to 4 minutes carefully lift off the top pan and use a spatula to flip over the sandwich to crisp the other side. (Be aware that stovetop cooking will take about twice as long.)

Transfer the sandwich to a cutting board. If serving the sandwich as a main course, cut it diagonally in half with a sharp knife and transfer to a serving plate and serve immediately; if serving it as an appetizer, cut each half crosswise to make a total of 4 small triangular pieces and transfer to a platter kept warm in a 200 degrees F. (95 degrees C) oven while you make more.