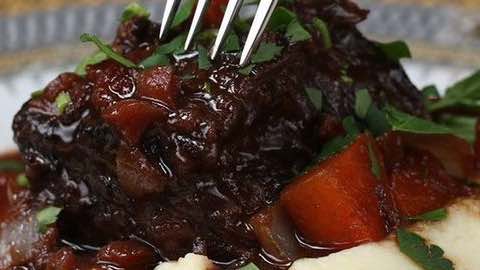 This recipe also works in a crock pot, allowing you to assemble the ingredients in the morning and leave them to slowly cook all day.

In our fast-paced world, it can be a relief to come across something that's better for being slower. And that can certainly be true for preparing meals, with some of the most delicious, satisfying cold-weather main dishes resulting from slow, gentle stewing or braising.

One of my favorite things about such slow cooking is that you don't have to use the most expensive ingredients to get the best results. The tough, bony, sinewy cuts of meat, which are the most flavorful, also benefit the most from prolonged exposure to moist, gentle heat, turning so tender and juicy that they become a luxurious eating experience.

Take the beef short ribs that star in the recipe I share here. Not too long ago, nobody was cooking them in fine restaurants. But I like to think that I've done my part to change that situation, frequently including short ribs on my menus. After they've spent several hours cooking, their rich-tasting meat literally melts in your mouth.

My recipe features a Dutch oven, the versatile large pot of enameled cast-iron that no kitchen should be without, since it moves so easily from the stovetop to the oven to the serving table (provided you have a sturdy heatproof trivet under it, of course). But the recipe will also work perfectly if you want to use an electric slow cooker, that wonderful appliance that enables you to assemble a dish in the morning and leave it to cook all day on your kitchen counter, with dinner ready to serve when you come home.

To adapt my recipe for a slow cooker, you'll still need to brown the short ribs and vegetables in a Dutch oven or a large skillet, as directed, and then deglaze the pan deposits and heat up the cooking liquid. Then, simply assemble all the solid ingredients in the crockery insert of your slow cooker, add the hot liquid, put on the lid, and cook until the short ribs are tender, about 5 hours on the high-heat setting or 8 to 10 hours on the low-heat setting. Take care to skim off the fat and adjust the seasonings as directed before serving.

However you cook the recipe, you should also consider making it a day ahead, if that's convenient, since short ribs taste even better reheated. Just let the ribs and sauce cool for 30 minutes or so before transferring them to a covered container in the refrigerator. The next day, remove and discard the solidified fat from the surface. Then, transfer the ribs and sauce to a baking dish, cover with foil, and warm them up in a 350 degrees F oven for 30 to 45 minutes.

I promise you, the results will be well worth waiting for.

Set a rack in the middle of the oven and preheat the oven to 325 degrees F.

Season the short ribs all over with salt and pepper to taste.

In a large Dutch oven, heat the olive oil over medium-high heat. Add the short ribs, in batches if necessary to avoid crowding, and sear them until well browned, 3 to 4 minutes per side, turning them with tongs or a slotted spoon and removing them to a plate or bowl when done.

Add the celery, onion, carrot, and garlic to the Dutch oven and saute, stirring frequently, until the onions turn translucent, 3 to 5 minutes.

Add the wine to the Dutch oven and bring it to a boil, stirring and scraping with a wooden spoon to deglaze the pan deposits. Return the short ribs to the Dutch oven, arranging them in an even layer.

Add the tomatoes and bay leaves. Arrange the thyme, parsley, and peppercorns in the center of a square of cheesecloth; gather up the corners and tie them securely with kitchen string to make a bouquet garni, and add it to the Dutch oven. Pour in the beef and chicken broth, raise the heat to high, and bring the liquid to a boil.

Remove the Dutch oven from the heat, put on its lid, and carefully transfer to the oven. Cook until the short ribs are very tender, about 3 hours.

Carefully transfer the Dutch oven to the stovetop. Use a slotted spoon to transfer the short ribs to a platter or shallow bowl and cover with aluminum foil. With a large, shallow spoon, skim off excess fat from the surface of the cooking liquid. Discard the bay leaves and bouquet garni. Taste the sauce and adjust the seasonings with salt and pepper.

To serve, transfer the ribs to individual serving plates. Spoon the sauce over and around each serving.