The Health Benefits of Tai Chi 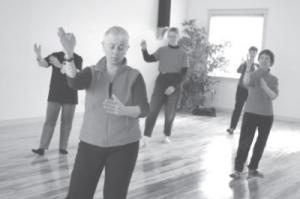 Tai Chi is a gentle form of exercise that can prevent or ease many ills of aging and could be the perfect activity for the rest of your life. Tai chi is often described as meditation in motion, but it might well be called medication in motion.

This gentle form of exercise can prevent or ease many ills of aging and could be the perfect activity for the rest of your life.

There is growing evidence that this mind-body practice, which originated in China as a martial art, has value in treating or preventing many health problems. And you can get started even if you aren't in top shape or the best of health.

In this low-impact, slow-motion exercise, you go without pausing through a series of motions named for animal actions -- for example, "white crane spreads its wings" -- or martial arts moves, such as "box both ears." As you move, you breathe deeply and naturally, focusing your attention -- as in some kinds of meditation -- on your bodily sensations.

Tai chi differs from other types of exercise in several respects.

The movements are usually circular and never forced, the muscles are relaxed rather than tensed, the joints are not fully extended or bent, and connective tissues are not stretched. Tai chi can be easily adapted for anyone, from the most fit to people confined to wheelchairs or recovering from surgery.

A tai chi class practices a short form at the Tree of Life Tai Chi Center in Watertown, Mass.

"A growing body of carefully conducted research is building a compelling case for tai chi as an adjunct to standard medical treatment for the prevention and rehabilitation of many conditions commonly associated with age," says Peter M. Wayne, assistant professor of medicine at Harvard Medical School and director of the Tai Chi and Mind-Body Research Program at Harvard Medical School's Osher Research Center. An adjunct therapy is one that's used together with primary medical treatments, either to address a disease itself or its primary symptoms, or, more generally, to improve a patient's functioning and quality of life.

You don't need to subscribe to or learn much about tai chi's roots in Chinese philosophy to enjoy its health benefits, but these concepts can help make sense of its approach:

Qi -- an energy force thought to flow through the body; tai chi is said to unblock and encourage the proper flow of qi.

Yin and yang -- opposing elements thought to make up the universe that need to be kept in harmony. Tai chi is said to promote this balance.

Easy motions, such as shoulder circles, turning the head from side to side, or rocking back and forth, help you to loosen your muscles and joints and focus on your breath and body.

Short forms -- forms are sets of movements -- may include a dozen or fewer movements; long forms may include hundreds. Different styles require smaller or larger movements. A short form with smaller, slower movements is usually recommended at the beginning, especially if you're older or not in good condition.

Translated as "breath work" or "energy work," this consists of a few minutes of gentle breathing sometimes combined with movement. The idea is to help relax the mind and mobilize the body's energy. Qigong may be practiced standing, sitting, or lying down.

The benefits of tai chi are generally greatest if you begin before you develop a chronic illness or functional limitations. Tai chi is very safe, and no fancy equipment is needed, so it's easy to get started. Here's some advice for doing so:

Don't be intimidated by the language. Names like Yang, Wu, and Cheng are given to various branches of tai chi, in honor of people who devised the sets of movements called forms. Certain programs emphasize the martial arts aspect of tai chi rather than its potential for healing and stress reduction. In some forms, you learn long sequences of movements, while others involve shorter series and more focus on breathing and meditation. The name is less important than finding an approach that matches your interests and needs.

Check with your doctor.

If you have a limiting musculoskeletal problem or medical condition -- or if you take medications that can make you dizzy or lightheaded -- check with your doctor before starting tai chi. Given its excellent safety record, chances are that you'll be encouraged to try it.

Consider observing and taking a class.

Taking a class may be the best way to learn tai chi. Seeing a teacher in action, getting feedback, and experiencing the camaraderie of a group are all pluses. Most teachers will let you observe the class first to see if you feel comfortable with the approach and atmosphere. Instruction can be individualized. Ask about classes at your local Y, senior center, or community education center. The Arthritis Foundation (www.arthritis.org; 800-283-7800, toll-free) can tell you whether its tai chi program, a 12-movement, easy-to-learn sequence, is offered in your area.

If you'd rather learn at home, you can buy or rent videos geared to your interests and fitness needs (see "Selected resources"). Although there are some excellent tai chi books, it can be difficult to appreciate the flow of movements from still photos or illustrations.

Talk to the instructor.

There's no standard training or licensing for tai chi instructors, so you'll need to rely on recommendations from friends or clinicians and, of course, your own judgment. Look for an experienced teacher who will accommodate individual health concerns or levels of coordination and fitness.

Choose loose-fitting clothes that don't restrict your range of motion. You can practice barefoot or in lightweight, comfortable, and flexible shoes. Tai chi shoes are available, but ones you find in your closet will probably work fine. You'll need shoes that won't slip and can provide enough support to help you balance, but have soles thin enough to allow you to feel the ground. Running shoes, designed to propel you forward, are usually unsuitable.

Most beginning programs and tai chi interventions tested in medical research last at least 12 weeks, with instruction once or twice a week and practice at home. By the end of that time, you should know whether you enjoy tai chi, and you may already notice positive physical and psychological changes.

Although tai chi is slow and gentle and doesn't leave you breathless, it addresses the key components of fitness -- muscle strength, flexibility, balance, and, to a lesser degree, aerobic conditioning. Here's some of the evidence:

In a 2006 study published in Alternative Therapies in Health and Medicine, Stanford University researchers reported benefits of tai chi in 39 women and men, average age 66, with below-average fitness and at least one cardiovascular risk factor. After taking 36 tai chi classes in 12 weeks, they showed improvement in both lower-body strength (measured by the number of times they could rise from a chair in 30 seconds) and upper-body strength (measured by their ability to do arm curls).

In a Japanese study using the same strength measures, 113 older adults were assigned to different 12-week exercise programs, including tai chi, brisk walking, and resistance training. People who did tai chi improved more than 30% in lower-body strength and 25% in arm strength -- almost as much as those who participated in resistance training, and more than those assigned to brisk walking.

"Although you aren't working with weights or resistance bands, the unsupported arm exercise involved in tai chi strengthens your upper body," says internist Dr. Gloria Yeh, an assistant professor at Harvard Medical School. "Tai chi strengthens both the lower and upper extremities and also the core muscles of the back and abdomen."

Women in the 2006 Stanford study significantly boosted upper- and lower-body flexibility as well as strength.

Tai chi improves balance and, according to some studies, reduces falls. Proprioception -- the ability to sense the position of one's body in space -- declines with age. Tai chi helps train this sense, which is a function of sensory neurons in the inner ear and stretch receptors in the muscles and ligaments. Tai chi also improves muscle strength and flexibility, which makes it easier to recover from a stumble. Fear of falling can make you more likely to fall; some studies have found that tai chi training helps reduce that fear.

Depending on the speed and size of the movements, tai chi can provide some aerobic benefits. But in the Japanese study, only participants assigned to brisk walking gained much aerobic fitness. If your clinician advises a more intense cardio workout with a higher heart rate than tai chi can offer, you may need something more aerobic as well.

When combined with standard treatment, tai chi appears to be helpful for several medical conditions. For example:

In a 40-person study at Tufts University, presented in October 2008 at a meeting of the American College of Rheumatology, an hour of tai chi twice a week for 12 weeks reduced pain and improved mood and physical functioning more than standard stretching exercises in people with severe knee osteoarthritis. According to a Korean study published in December 2008 in Evidence-based Complementary and Alternative Medicine, eight weeks of tai chi classes followed by eight weeks of home practice significantly improved flexibility and slowed the disease process in patients with ankylosing spondylitis, a painful and debilitating inflammatory form of arthritis that affects the spine.

A review of six controlled studies by Dr. Wayne and other Harvard researchers indicates that tai chi may be a safe and effective way to maintain bone density in postmenopausal women. A controlled study of tai chi in women with osteopenia (diminished bone density not as severe as osteoporosis) is under way at the Osher Research Center and Boston's Beth Israel Deaconess Medical Center.

Tai chi has shown potential for improving quality of life and functional capacity (the physical ability to carry out normal daily activities, such as work or exercise) in women suffering from breast cancer or the side effects of breast cancer treatment. For example, a 2008 study at the University of Rochester, published in Medicine and Sport Science, found that quality of life and functional capacity (including aerobic capacity, muscular strength, and flexibility) improved in women with breast cancer who did 12 weeks of tai chi, while declining in a control group that received only supportive therapy.

A 53-person study at National Taiwan University found that a year of tai chi significantly boosted exercise capacity, lowered blood pressure, and improved levels of cholesterol, triglycerides, insulin, and C-reactive protein in people at high risk for heart disease. The study, which was published in the September 2008 Journal of Alternative and Complementary Medicine, found no improvement in a control group that did not practice tai chi.

In a 30-person pilot study at Harvard Medical School, 12 weeks of tai chi improved participants' ability to walk and quality of life. It also reduced blood levels of B-type natriuretic protein, an indicator of heart failure. A 150-patient controlled trial is under way.

In a review of 26 studies in English or Chinese published in Preventive Cardiology (Spring 2008), Dr. Yeh reported that in 85% of trials, tai chi lowered blood pressure -- with improvements ranging from 3 to 32 mm Hg in systolic pressure and from 2 to 18 mm Hg in diastolic pressure.

In a University of California, Los Angeles, study of 112 healthy older adults with moderate sleep complaints, 16 weeks of tai chi improved the quality and duration of sleep significantly more than standard sleep education. The study was published in the July 2008 issue of the journal Sleep.

In 136 patients who'd had a stroke at least six months earlier, 12 weeks of tai chi improved standing balance more than a general exercise program that entailed breathing, stretching, and mobilizing muscles and joints involved in sitting and walking. Findings were published in the January 2009 issue of Neurorehabilitation and Neural Repair.

The Health Benefits of Tai Chi