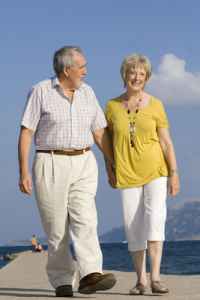 The prostate gland is stimulated by testosterone, the major male hormone; that's a bad thing for older gents at risk for benign prostatic hyperplasia (BPH; an enlarged gland), or prostate cancer.

I am 76 years old, and I've had an enlarged prostate for at least 10 years. I've been taking Proscar for about a year, and it seems to be helping quite a bit. I have not noticed any side effects, but I'm worried that if the medicine reduces testosterone levels enough to shrink my prostate, it will also give me osteoporosis.

Should I change medications, or take Fosamax like my wife?

The prostate gland is stimulated by testosterone, the major male hormone; that's a bad thing for older gents at risk for benign prostatic hyperplasia (BPH; an enlarged gland), or prostate cancer.

Finasteride (Proscar) and its newer rival, dutasteride (Avodart) block the action of testosterone in the prostate, but they will not interfere with bone mineralization.

It sounds like a paradox, but it's not. Here's why.

Bones respond directly to testosterone, as do many other male tissues: testosterone produces the strong, large muscles, deep voice, facial and body hair, sex drive, and tendency toward aggressiveness that characterize the male gender by acting directly on a man's organs and tissues. But the prostate and the scalp's hair follicles are a bit different.

To affect these organs, testosterone must first be converted to dihydrotestosterone (DHT). In turn, DHT stimulates the prostate and stuns the scalp hair, producing unwelcome changes in many men.

Testosterone is converted to DHT by an enzyme called 5-alpha reductase.

Finasteride and dutasteride inhibit the enzyme; they lower DHT levels in the prostate and blood by 70% to 90%, but they do not reduce testosterone levels.

As a result, long-term use can shrink the prostate by about 25%, and it may stimulate some hair follicles that are not too far gone, but it will not melt muscles or turn baritones into sopranos.

According to published reports, only 4% to 5% of men notice decreased sex drive or erectile dysfunction while on the medications.

A randomized clinical trial of 117 men proved the point: after four years of therapy, men taking 5 mg of finasteride a day had the same bone mineral density as men taking a placebo.

On the other hand, men who need androgen-deprivation therapy to control advanced prostate cancer are at risk for osteoporosis ("thin bones") because treatment drastically lowers testosterone levels.

Like your wife, they can benefit from alendronate (Fosamax), a drug that increases bone calcium. But men taking 5-alpha reductase inhibitors for BPH don't have to worry about their bones.

Your wife's Fosamax supply is safe.