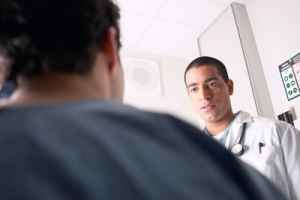 Despite grim statistics, doctors have made great progress in understanding Prostate Cancer, and they have already been able to improve the diagnosis and treatment of Prostate Cancer. But instead of just waiting for new breakthroughs, you can do a lot to protect yourself from Prostate Cancer right now.

Genes regulate the growth, multiplication, and death of all human cells. Cancer develops when cell growth escapes from the normal control that holds it in check.

In a fundamental sense, then, all cancers depend on genetic abnormalities.

In some cases, abnormal genes are passed down from parent to child.

In others, problems develop after birth as a result of environmental influences, including nutritional imbalances and exposure to tobacco, radiation, and toxins.

If genes are responsible for cancer, then therapies that target genetic abnormalities should be beneficial.

That possibility lies in the future, but we are already at the point where genetic testing can predict the risk of certain cancers. The breast cancer genes BRCA1 and BRCA2 are the best-known examples.

Prostate cancer is the most common internal malignancy in American men and the second leading cause of cancer death among males in the United States. Some men inherit an increased risk of prostate cancer. Men with fathers or brothers who've had prostate cancer are 1.5 to three times more likely to get the disease than men with no family history; if multiple relatives have been diagnosed before age 55, a man's risk rises even further. But most cases of prostate cancer occur in men without a family history of the disease; that's because anytime after birth, males can develop the genetic abnormalities that drive the disease later in life.

The first prostate cancer gene was identified by a team of scientists in the United States and Sweden in 1996. The gene was aptly named hereditary prostate cancer 1, or HPC1. It was an exciting discovery, but HPC1 accounts for just a tiny fraction of all prostate cancers.

Since the late 1990s, genetic research has exploded. Numerous prostate cancer genes have been proposed; many have been confirmed, but some have not stood up to additional research. And even when particular genes have been implicated, their exact functions and roles in cancer have not been determined.

New techniques allow scientists to scan the entire human genome, the sum total of all the genetic material in human cells, for abnormalities. In brief, the idea is to recruit patients with a particular disease, scan their genes for polymorphisms, and compare the results with the genetic profiles of people who do not have the disease in question. Polymorphisms are naturally occurring variations in gene structure; it's normal to find some, but if the number is large, the statisticians weigh in to determine if the abnormalities occur often enough to suggest a link to the disease that's being investigated.

Abnormalities of individual nucleotides are known to the pros as single nucleotide polymorphisms, or SNPs. It's very sophisticated, complex research that usually depends on large teams of scientists from around the world. Few men will try to grapple with the details, but most will be interested to learn that many SNPs have been linked to prostate cancer. And even if you're not interested now, you may be later. That's because you could soon be invited to pay for a genetic test that screens for prostate cancer SNPs.

To review the pros and cons of genetic screening, let's focus on one of the most widely publicized studies of prostate cancer.

Scientists in the United States and Sweden compared the genetic profiles of 2,893 prostate cancer patients and 1,781 men who were free of the disease.

That's a substantial risk indeed, but it doesn't necessarily mean the test is right for you

One caution is based on the possibility of false-negative and false-positive results. Only 5.4% of the men with prostate cancer but no family history of the disease had four or five abnormal SNPs. That means the test failed to predict almost 95% of the cancers in these men. On the other hand, 2.2% of the men without cancer had four or five SNPs; they would worry about an increased risk when none was present.

Worry itself is another issue. Men with abnormal genetic scans might face years of anxiety. And privacy is also a concern since a positive test might affect insurance or even employment.

But the most important caution of all relates to the natural history of prostate cancer itself.

Many prostate cancers are slow growing and indolent, even harmless, while some are aggressive, even lethal. This genetic test is not able to tell the good actors from the bad. Since positive genetic tests are likely to lead to aggressive prostate cancer screening with prostate-specific antigen (PSA) tests and prostate biopsies, it would lead to treatment (and side effects) that might never have been necessary. And there's a final hooker: even if the chain of events leads to early diagnosis, doctors don't know if that will lead to a better outcome.

Genetic screening for prostate cancer is still experimental; it has not been approved by the FDA, and it's not available commercially.

But if (or when) it's ready for prime time, the decision about testing will be up to you.

Men with strong family histories of prostate cancer might choose genetic testing and aggressive prostate cancer screening, while men at average risk might decide to hold off.

And all men will want to pay close attention to new research that may help answer some of these crucial but vexing questions.