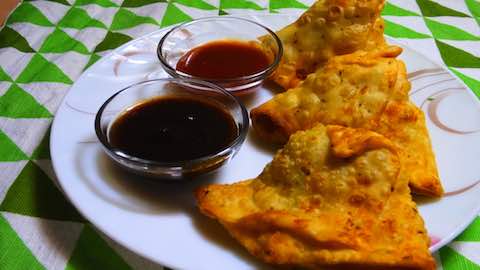 Like many people with a European background, the main seasonings I grew up with were pepper and salt.

So, when I started learning to cook professionally, one of the things that intrigued me most was how much flavor you could add to a recipe with different combinations of spices.

In Paris in the late 1960s, my favorite restaurants were Moroccan and Vietnamese, because every bite thrilled me with its spicy taste. A decade later, having moved to Los Angeles, I found myself on my days off eating in Korean and Chinese restaurants.

One of my favorite discoveries, however, was an Indian restaurant, where I often hung out on Sunday evenings, sharing food with its owner, who introduced me to the complex blends of different spices -- including cardamom, cumin, fennel, turmeric, and chilies, to name just a few -- that gave the foods of his homeland so much interest and variety.

Little by little, I began to use these spices in my own cooking. And one of the first Indian dishes I learned to make is an excellent introduction for anyone to that country's foods and spices: Samosas, small pastry turnovers filled with a mixture of spiced potatoes, garlic, onion, chilies and other vegetables.

These crispy triangular packets are popular in India as a snack, an appetizer, or a casual meal. You can add any vegetable you like to the potato mixture: cauliflower, green beans, roasted peppers, sauteed mushrooms, chopped tomatoes -- you name it. Some cooks also add a generous helping of sauteed minced lamb, chicken, or other protein.

The seasonings I include in the recipe here provide moderately spicy results that will suit most tastes. After you've made the samosas once, feel free to adjust the spice levels to your own preference.

Whatever you do, however, always aim to toast the spices yourself for the best flavor. Just put the whole spice seeds in a small, dry saute pan and cook over low heat, stirring frequently, until they are fragrant and have darkened in color just slightly; then, transfer to a dish to cool before crushing them with a mortar and pestle or grinding them in a spice grinder.

In place of the homemade pastry dough that traditional Indian cooks make, I simplify the recipe by using wonton skins, found in Asian markets and in the refrigerated case of well-stocked supermarkets, which yield similarly crispy results. While my recipe calls for cooking the samosas by deep-frying, you could also bake them in an oven preheated to 375 degrees F. until golden brown, 20 to 25 minutes.

Whichever way you cook them, the results will be irresistibly delicious. No doubt, you'll find yourself craving Indian spices more and more, incorporating them into other dishes you cook all the time.

Leave potatoes at room temperature to cool for 10 minutes, then cut in half lengthwise to release steam. When cool to the touch, use a fork to scoop out the potato halves, transferring them to a mixing bowl and mashing and fluffing them. Discard the potato skins.

Put the vegetable oil in an electric deep-fryer or in a deep, heavy pan. Set the deep-fryer to 350 degrees F. or secure a deep-frying thermometer to the side of the pan and heat on the stovetop to that temperature.

While the oil heats, in a large saute pan over medium-high heat, heat the ghee or clarified butter. Add the onions, garlic, chili, and peas and cook, stirring until glossy, about 1 minute. Stir in the ginger, cumin, and coriander; cook until fragrant, about 20 seconds. Add the mixture to the potato, stir well, and season to taste with salt, pepper, and a little sugar. Stir in cilantro. Let cool completely before shaping the samosas.

To shape the samosas, spoon a generous tablespoon of the filling into your palm and, with both hands, form it into a cone shape. Place at an angle on top of a wonton wrapper. Brush the beaten egg around the edges of the wrapper and fold the edges over the filling to form a triangular package, pressing gently to seal it shut; then, place seam down on a platter or tray. Repeat with the remaining filling and wrappers.

Working in several batches to avoid overcrowding, deep-fry the samosas until deep golden brown and crisp, about 4 minutes per batch. Remove with the frying basket or a wire skimmer or slotted spoon and drain on paper towels. Then, transfer to a baking dish and keep warm in the oven while frying the remaining samosas.

When all the samosas are done, serve immediately, accompanied by chutney for dipping.