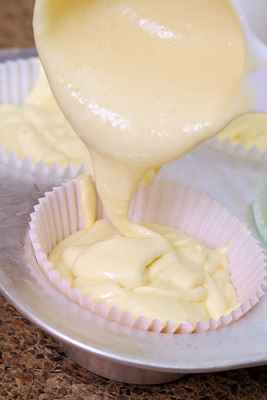 One of the hottest topics in the food world these days is slow food, which extols the virtues of old-fashioned dishes that take hours to cook. And, yes, there is much to be said for the complex, deep pleasures of foods in which time is one of the most bountiful ingredients.

But, being the father of four boys ranging in age from a preschooler to a young man who's just completed his second year of college, I also know there's an important counterpoint to slow food: instant gratification. What parents haven't experienced children trooping into the kitchen with ravenous looks on their faces, saying the immortal words, "I'm starving. When's it going to be ready?"

Just try, at such a moment, explaining the many virtues of food cooked for hours!

One of my favorite ways to give my kids lovingly homemade treats that meet their need for instant gratification is to make cupcakes. From start to finish, most cupcake recipes take little more than half an hour.

Which means that, by the time the wonderful aromas lure your young ones to the kitchen, the cupcakes will be almost ready to serve.

It doesn't take too much effort or expertise to prepare my lemon cupcakes. A stand mixer, must-have equipment for anyone who loves baking, is the most efficient tool for making the batter, but a good-quality hand-held electric mixer will do the job well, too. Beyond that, all you need are measuring cups and spoons, mixing bowls, a rubber spatula, a fine-meshed sieve or a hand-held sifter to sift the dry ingredients, and a muffin or cupcake tin.

You'll also need something to remove the lemon zest, the flavorful brightly colored outermost layer of the fruit's peel. Some people use special citrus zesters, hand-held tools with sharp-edged little holes that cut off the zest in thin strips. But a small hand-held grater will do the job, too; or you can remove the zest with a swivel-bladed vegetable peeler, then chop it with a knife. Whatever method you use, be sure not to remove any of the bitter white pith beneath the zest.

The lemon zest, combined with a splash of the fruit's juice, really enlivens the cupcakes. (You could use other citrus fruit, too, to make lime, grapefruit, or orange cupcakes.) But there's one more secret to my recipe that sets it apart from many other cupcakes: a warm lemon syrup. Quickly made from lemon juice and sugar while the cupcakes bake, it is brushed all over the little cakes when they come out of the oven.

For the cupcakes, preheat the oven to 350 degrees F. Spray the cups of a 12-cup standard-sized (1/2-cup) muffin or cupcake pan with nonstick cooking spray.

Fit an electric stand mixer with the paddle attachment. Alternatively, insert the beaters into a hand-held electric mixer.

Put the butter, sugar, and lemon zest in the bowl of the stand mixer or in a mixing bowl. Beat at medium speed until the mixture is very light, pale, and fluffy, about 5 minutes, stopping two or three times to scrape down the bowl with a rubber spatula.

Into another bowl, sift together the flour, baking soda, and salt. Set aside.

On low speed, alternately beat in the buttermilk and the sifted flour mixture in three batches each until fully incorporated.

Spoon the batter into the prepared muffin cups.

Bake the cupcakes until they are deep golden brown and slightly firm to a light touch, and a thin wooden skewer inserted into the center of a cupcake comes out clean, about 10 to 15 minutes total time, rotating the pan 180 degrees about halfway through the baking time.

As soon as the cupcakes start baking, begin making the syrup. Put the sugar and lemon juice in a nonreactive saucepan. Stirring frequently, cook the mixture over medium-high heat. As soon as the sugar has dissolved completely and the mixture has come to a boil, reduce the heat and simmer briskly, stirring occasionally, until the mixture has thickened to a syrupy but still pourable consistency.

Remove the cupcakes from the oven and place on a wire rack. With a thin skewer, poke holes all over the hot cupcakes. Generously and repeatedly brush the lemon syrup all over them, until they have soaked up as much of the syrup as they can. (You may have leftover syrup, which can be refrigerated and used to sweeten other desserts or iced tea.)

Serve the cupcakes warm or at room temperature.