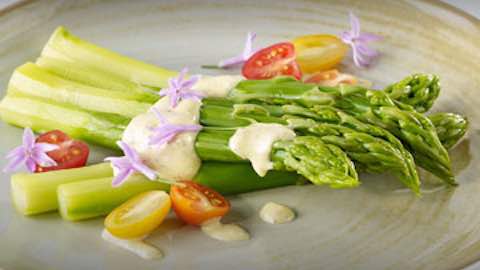 It makes me sad sometimes that, thanks to modern airfreight, you can get most fruits and vegetables now year round.

Fresh produce just doesn't offer most people the excitement that filled the air in my little town in Austria each spring when people heard that the first asparagus was on the way.

No other vegetable so perfectly captures the joys of spring.

Those slender stalks, so tender and flavorful with their sweet, grassy overtones, taste like the essence of seasonal renewal.

In central Europe, we went especially wild over white asparagus. It's the same plant as the green asparagus more common in North America, but the stalks are grown covered in mounds of earth that keep sunlight away and thus prevent the development of the chlorophyll that gives them their green color. Pale ivory-toned white asparagus has an even milder flavor than the green variety, and its very short season -- from mid-April to the end of May -- makes it even more precious.

In fact, I love white asparagus so much that I take advantage of modern airfreight myself, flying in from Europe as much as I can get my hands on for my restaurants. We celebrate this seasonal treat by serving it simply as an appetizer, cooked tender-crisp and then chilled until serving time, when we accompany it with classic, rich sauces that complement its flavor, such as the sweet, tart, and spicy mixture of orange juice, mustard, and cream I share here. (For something lighter, serve it with your favorite vinaigrette dressing.)

Whatever you serve with the asparagus, take care to cook the vegetable carefully. To trim the spears, hold each one between both hands near the cut end and bend the cut end to snap it off, usually no more than about 1 inch or so. Bring a generous quantity of salted water to a boil in a pot large enough to hold the spears comfortably, so the water will return to a boil quickly after you add the asparagus.

Cook the asparagus only a few minutes until tender but still slightly crisp; the tip of a sharp knife should enter the thickest part of a stalk fairly easily. Then, drain the asparagus quickly and instantly submerge the spears in a bowl of ice water. This not only stops the cooking but also sets the vegetables' bright color.

Cooked and served this way, fresh springtime's asparagus gets the treatment it deserves. It's so delicious, even my 3-year-old son, Oliver, insists that we grab a few bundles on Sundays when we go to the farmers' market. It's his favorite vegetable. And, if it isn't already, I'm sure it will become yours, too.

In a pot large enough to submerge all the asparagus, bring salted water to a boil. Add the asparagus and cook until al dente, tender but still slightly crisp, about 5 minutes for jumbo spears (3 minutes for pencil-thin spears) from the time the water returns to a boil.

Meanwhile, fill a large mixing bowl with ice cubes and water. As soon as the asparagus is done, drain it and submerge the spears in the ice water to stop the cooking process. Drain well, transfer to a platter, cover with plastic wrap, and refrigerate until ready to serve.

Meanwhile, in a medium saucepan over medium heat, briskly simmer the orange juice until only 1/2 cup remains, about 20 minutes. Transfer the reduced juice to a heatproof bowl set inside a larger bowl filled with ice and stir the juice occasionally until thoroughly cooled.

Meanwhile, put the cream in a separate bowl and, with a wire whisk or a hand-held electric mixer on medium speed, whip the cream until it is thick enough to hold soft, slightly drooping peaks when the beaters are lifted out.

Stir the mustard, salt, and pepper into the chilled orange juice. Add the whipped cream and stir with a whisk until well blended. Cover the bowl with plastic wrap and refrigerate until ready to serve.

At serving time, divide the asparagus spears among 4 chilled serving plates. Spoon a little of the sauce over them and garnish with chives. Pass extra sauce at the table.