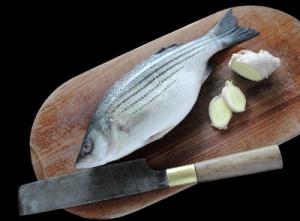 If I told you that I love to serve main-course fish fillets with a salad dressing, you might be excused for thinking it was an April Fool's Day joke. I have, after all, been known to play a few jokes in the kitchen.

But when it comes to dressing fish with vinaigrette, I'm serious.

Think about it for a minute. In French, the full name for a vinaigrette dressing is sauce vinaigrette, literally a "little vinegar sauce."

It contains the elements of many other classic sauces: an acidic ingredient to give it lively flavor, an oil or fat for richness, and seasonings to add complexity. What makes it "little," really, is the fact that it can be prepared so quickly and easily without cooking, using a mixing bowl, a whisk, and a few flicks of your wrist.

So why not serve vinaigrette as the sauce for a main course?

That's the question I asked myself many years ago when I found that many of the famous health-concerned, image-conscious Hollywood celebrities I cooked for started asking me for their grilled seafood "dry," without the butter-based sauces -- beurre blanc, beurre rouge, beurre aux fines herbes, and so on -- with which they're sometimes served in French cuisine.

When I offered them "a light vinaigrette" with their fish, however, nobody passed. And why should they? Vinaigrettes do tend to be lighter than butter sauces. Though they still contain fat, it comes mostly in the form of olive oil, which we all now know is counted among those fats doctors and nutritionists tell us are "heart-healthy."

The fresh-tasting vinaigrettes I began to feature on my menu when I opened the first Spago on the Sunset Strip in 1982 also seemed the perfect complement to the rustic simplicity of food from the wood-burning grill and oven I installed in the restaurant. Preparations like the Striped Bass in Ginger Vinaigrette I share with you here became examples of a movement that quickly came to be known as California cuisine.

But you don't need a kitchen with a wood-burning grill to achieve such results at home. An outdoor grill will work fine. So will your broiler. Or you can simply saute the fish in a skillet instead, saving yourself the time it takes to preheat the grill.

Other than that, the most involved part of the recipe comes in the few minutes you'll spend preparing the vinaigrette. Be sure, however, not to add the fresh herbs to the sauce until the last minute, so they'll retain their bright green color.

In all, your actual time spent preparing and cooking your meal will be well under 15 minutes, which isn't bad for such a fresh-tasting, flavorful, and light main course. And that's no joke!

If you plan to grill the fish, preheat an outdoor grill or indoor grill.

Meanwhile, make the vinaigrette. In a small mixing bowl, use a wire whisk to stir together the ginger, shallots, vinegar, soy sauce, and lime juice. Whisking vigorously, slowly pour in the olive oil and then the sesame oil. Season to taste with salt and white pepper.

Season the fish fillets on both sides with salt and white pepper. Grill them just until cooked through, 1 to 2 minutes per side. (If you plan to saute the fish instead of grilling it, heat a large nonstick skillet over high heat. Add the olive oil and the butter and, when the butter has melted, swirl them together to coat the pan and add the fish fillets, cooking them for 1 to 2 minutes per side.)

As soon as the fish is done, stir the chopped cilantro or parsley leaves into the vinaigrette. (Doing this at the last minutes prevents the herbs from discoloring.)

Spoon a pool of the vinaigrette in the center of each serving plate. Top each pool of dressing with a fish fillet. Garnish each serving with toasted sesame seeds and a few whole parsley or cilantro leaves.