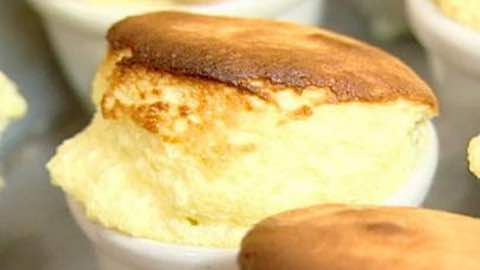 In the middle of this pudding is a layer of sliced, cinnamon-spiced poached pears, a perfect complement to the creamy rice mixture.

More than just about any other kind of recipes, desserts you make at home for your loved ones feel like food that comes straight from the heart.

Almost everyone, after all, loves something sweet and satisfying at the end of a meal.

Winter calls for warm, satisfying desserts that raise the comfort level even more. That's why now is the time of year I like to make baked puddings like the old-fashioned rice souffle I share with you here.

The foundation of this particular dessert is a wonderfully custardy rice pudding into which you fold beaten egg whites, which give the mixture a fluffy lift when it bakes in the oven. In the middle of the pudding is a layer of sliced, cinnamon-spiced poached pears, a perfect complement to the creamy rice mixture.

Two more easy-to-prepare elements transform this home-style dessert into something elegant that you could proudly serve even at a fancy dinner party.

A quickly simmered raspberry compote, made with frozen or fresh raspberries, becomes a sauce that you spoon onto each individual serving plate or shallow bowl as a base for the rice pudding when you dish it up hot from the oven.

To heighten the flavor of the compote, I often like to include a couple of spoonfuls of framboise, the French raspberry liqueur, which you can find in well-stocked liquor stores. Much of the alcohol in the framboise will evaporate, but you could leave out the liqueur if you prefer.

And just before serving, I like to whip up a simple meringue from a few more beaten egg whites and some sugar. Spooned or piped decoratively on top of the cooked pudding, then sprinkled with shredded coconut for extra texture, color, and flavor, it's cooked just briefly under the broiler to give it a light golden color and a richer flavor while maintaining its creamy consistency. (Some cooks prefer to just brown the meringue briefly using a hand-held culinary butane torch, sold at reasonable prices in many kitchen stores.)

The whole dessert is so easy and fun to make that I love to enlist my young sons to cook it with me. Under my close supervision, I'll let them stir together the rice, milk, vanilla, and sugar, before the pan goes on the heat, of course.

Later, when I'm making the meringue topping, I tell them that we will turn the fluffy white mixture into a wonderful mountain range that they can eat, and their eyes open wide at that thought. The only problem is, the meringue usually winds up looking more like foothills than high peaks, because half of it finds its way into their mouths before the dessert goes under the broiler.

First, make the Poached Pears. In a small saucepan, combine the pears, water, sugar, and cinnamon. Bring to a boil over high heat; reduce the heat to maintain a simmer. Poach the pears for 12 to 15 minutes. Set the pan aside to cool. When the pears are cool enough to handle, cut each half lengthwise into 4 slices. Cover and set aside.

For the Raspberry Compote, put the raspberries, sugar, framboise, and water in another small saucepan. Bring to a boil over medium-high heat, stirring occasionally; boil briskly for 1 minute. Remove from the heat and set aside.

For the Rice Souffle, preheat the oven to 350 degrees F. Melt 1 tablespoon of the butter and brush it all over the inside of a 10-inch ovenproof saute pan or souffle mold. Sprinkle evenly with breadcrumbs. Set aside.

In a medium saucepan, stir together the rice, milk, vanilla bean, and remaining butter. Put the pan over low heat and cook, stirring frequently, until all the liquid has been absorbed, 10 to 15 minutes. Transfer to a mixing bowl and leave to cool to room temperature.

In another mixing bowl, combine the 6 egg yolks and the confectioners' sugar. With a hand-held electric mixer on medium speed, beat until light and ribbony.

In another mixing bowl, using the hand-held electric mixer and clean beaters, beat the egg whites at medium-high speed until they form soft peaks that droop slightly when the beaters are lifted out. Still beating, sprinkle in the sugar; continue to beat until the whites hold firm peaks.

With a rubber spatula, fold the egg yolk mixture into the cooled cooked rice. Then, fold in the beaten egg whites. Pour half of the rice mixture into the prepared pan, spreading it evenly. Arrange the pears neatly on top; cover with the remaining rice mixture. Bake in the preheated oven until puffed and golden, 25 to 30 minutes.

Meanwhile, prepare the meringue. In a clean bowl with clean beaters, beat the egg whites at medium-high speed until they form soft peaks. Still beating, sprinkle in the sugar, and then continue to beat until the whites hold firm peaks.

When the rice souffle is done, remove it from the oven and turn on the broiler to preheat. Spoon the meringue evenly over the soufflé and sprinkle with the coconut, if desired. Put the souffle under the broiler and, watching carefully to avoid burning, broil briefly until golden brown.

To serve, spoon the Raspberry Compote onto individual serving plates or shallow bowls. Spoon the meringue-crowned rice souffle on top.