Rack of Pork with Prunes & Dates 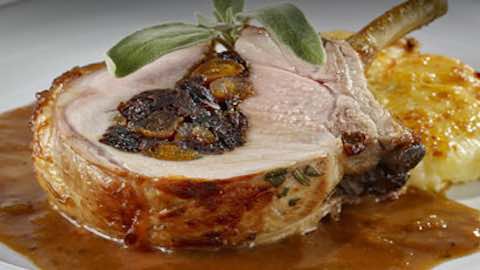 Rack of Pork with Prunes & Dates

Let me suggest a new star for your Christmas Holiday table, a rack of pork stuffed with dried fruit recipe.

I must say that I'm especially partial to this dish because, when I was a boy in central Europe, not only was a roast rack of pork a special treat but also, during the holidays, my mother made it extra special by butterflying the meat and then rolling it up like a jelly roll around a simple filling of dried prunes, a traditional Christmas-season ingredient in savory and sweet dishes alike.

In spite of the fact that the roast is butterflied, stuffed, and rolled up, this recipe is actually very easy.

In fact, it's all the easier if you ask your butcher to do the butterflying for you. (Order it right away, several days before Christmas, to make sure it's ready for you.)

Just tell the butcher to butterfly the rack twice, keeping it in one piece, to form a long, evenly thick rectangle with the rib bones at one end. Ask him, too, to "French" the bones, which simply means trimming them so their ends look neat and separate.

But there's no need to trim too much of the exterior fat, though, as it will help keep the meat moist during cooking; and guests who don't want to eat it can simply trim it off on their plates.

If you'd like to, or have to, butterfly the roast yourself, it's not that hard.

With a sharp knife held parallel to and up against all of the bones, cut down into the thickest part of the meat but not all the way through it, to opening up the meat like a book (or butterfly). Then, starting at the bottom of that first cut, slice again into the center of but not all the way through the thicker lobe of the meat, the part to which the bones aren't attached, to open that up again like a book. The end result should be a long, continuous rectangle with the bones at one end.

After stuffing the meat, all that remains to do is roll it up and tie snug loops of kitchen string between the bones.

Be sure to have an instant-read meat thermometer handy to test for doneness so you don't overcook the pork. I aim to remove it from the oven when it's cooked no more than medium-well, 150 degrees F. on the thermometer, and then let it rest, covered, for about 20 minutes so the hot juices settle back into the meat. That will guarantee that your spectacular new main dish will be perfectly tender and juicy.

Open up the butterflied pork roast cut side up on a work surface. Season the cut side of the butterflied meat on both sides with salt, pepper, and 1/2 tablespoon each of the chopped rosemary and sage, gently rubbing the seasonings into the meat.

With a sharp knife, coarsely chop the prunes and dates. Put them in a medium bowl and toss them together.

Spread the chopped prunes and dates on top of the pork. Moisten your fingers with fresh, cold water and push down on the dried fruit to press it into the meat.

Starting at the end of the meat farthest from the bones, tightly roll up the meat towards the bones, like a jelly roll, enclosing the filling. Using lengths of kitchen string, tightly tie up the pork rack, securing and knotting a length of string in each gap between the bones and at both ends. Season the outside of the stuffed rack with salt and pepper and the remaining herbs.

Heat the olive oil in a large, heavy skillet over high heat. Sear the pork rack on all sides until evenly browned, 5 to 7 minutes. Remove the pork to a platter and set aside.

Reduce the heat under the skillet to medium and add the butter. As soon as it has melted, add the onions, ginger, cinnamon stick, and star anise. Saute, stirring frequently, until the onions have turned golden brown, about 10 minutes. Stir in the maple syrup and continue sauteing, stirring continuously, until the mixture has a deep caramel color, about 2 minutes more.

Add the cider to the pan. Stir and scrape the pan with a wooden spoon to deglaze the deposits. Season to taste with salt and pepper and continue cooking until the liquid has reduced by half, about 5 minutes. Remove and discard the cinnamon stick and star anise.

Transfer the pork to a small roasting pan or baking dish and cover it with half of the onion mixture. Roast the pork until a roasting thermometer inserted into its thickest part not touching bone registers about 150 degrees F., about 1 hour and 20 minutes; halfway through the cooking time, spoon the remaining onion mixture over the roast.

When the pork is done, remove it from the oven, cover the dish with foil, and let the pork rest for 10 minutes to let the juices settle back into the meat. With a sharp knife, carve the roast between the bones into chops. Transfer to heated plates, spooning the onions and pan juices over and around each serving.