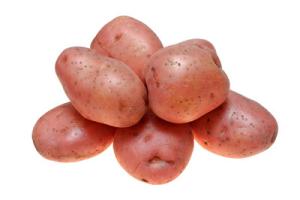 Since 1970, Americans concerned about our natural environment have observed Earth Day as a day to celebrate the planet, spreading the word about the benefits of recycling and raising awareness of ecological dangers including, in recent years, global climate change.

We chefs certainly play an important part in such initiatives.

Always a believer in cooking with fresh, locally produced food whenever possible, in recent years I've committed even more strongly to using sustainably produced ingredients, including organic produce, humanely raised meats, poultry and game, and environmentally sustainable seafood. Such decisions benefit everyone, from committed growers to guests who enjoy food that is safe, nutritious, and delicious.

But I'm not writing this just to talk about the environment. I also want to share a recipe that celebrates the earth's bounty on a very basic level.

I grew up in a rural setting where potatoes were a mainstay crop.

So, not surprisingly, I've always loved potatoes, and I've learned to cook them in many different ways. I enjoy them most of all when they're crispy on the outside and tender within, especially when cooked with butter. Add another earthy vegetable, onion, as well as some bacon and the combination only gets more irresistible.

That's the secret behind one of the great dishes of onion-loving Lyons, France: Potatoes Lyonnaise. A thick cake of potato shreds with a layer of caramelized onion in the middle, it makes a terrific side dish for roasted meat or poultry.

Or try it with a side of salad for a light lunch, or as an appetizer topped with thinly sliced smoked salmon, lemon juice, chives, and sour cream.

However you serve it, this French classic depends on a few simple chefs' tricks.

First, use clarified butter, from which you've removed all the milk solids that would otherwise burn during cooking. To clarify butter, melt it in a small saucepan over very low heat and then continue cooking for about 10 minutes until it stops bubbling, a sign that its water content has evaporated. Remove it from the heat and let rest for a few minutes. Finally, skim foam from the surface and carefully pour the clear liquid butterfat into a clean container, stopping before any of the milk solids on the bottom leave the pan. One stick of butter, 1/2 cup, will yield about 6 tablespoons of clarified butter.

Since the potato cake starts cooking on the stove and finishes in the oven, you'll also need an ovenproof saute pan, preferably nonstick. As another safeguard against sticking, squeeze all excess moisture from the shredded potatoes before cooking.

Meanwhile, heat a saute pan over medium heat and add 1 tablespoon of the clarified butter. Add the onion and saute, stirring occasionally, until golden brown, about 10 minutes. Stir in the crumbled bacon. Set aside.

With the julienne blade of a mandoline or the large holes of a shredder/grater, shred the potatoes. By handfuls, squeeze excess liquid from the shreds and transfer them to a mixing bowl. Add the remaining butter and the salt and pepper and stir well to coat the shreds.

Heat a 10-inch nonstick ovenproof skillet over medium heat. Add the olive oil. Squeezing away any liquid that has accumulated in the bowl, arrange half of the potatoes in the skillet in an even layer. Spread the sauteed onion over the potatoes, and then top with the remaining potatoes in an even layer. Saute over medium heat until the underside of the potato cake is golden brown, 10 to 15 minutes.

Put the skillet in the oven and bake until the cake is cooked through and the potatoes feel tender when pierced with a skewer or the tip of a sharp knife, about 10 minutes more. With a spatula, lift 1 side of the cake slightly to check if the underside is well browned. If not, put the skillet on top of the stove over medium-high heat and cook briefly to complete browning the underside.

Slide the potato cake onto a serving platter. Garnish with parsley and, with a sharp knife, cut it into 6 wedges. Serve immediately.