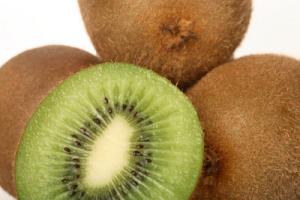 The kiwi's soft, juicy texture and sweet-tangy taste make it perfect for a tart

In the late 1970s, while I was chef at Ma Maison in Hollywood and playing my own part in the development of a style of fresh, seasonal cooking that came to be known as California cuisine, I remember some people joking that it was easy to spot food that was part of this movement because it was probably garnished with a slice of kiwifruit.

In fact, that was more a coincidence than a defining characteristic.

Kiwifruit just happened to be catching on in a major way back then, following its introduction to the U.S. in the 1950s. Originally called the Chinese gooseberry after its native country and oversized berry-like shape, the fruit was first renamed the "melonette." Then, in 1959, it was finally rechristened kiwifruit after the popular nickname for natives of New Zealand, where it grew to become a major crop after first being cultivated there in 1904.

I want to talk about why I loved kiwifruit the first time I tasted it more than 30 years ago, around this time of year when it's at the seasonal peak.

First, there was the surprise of its springtime-bright lime-green color beneath the easily peeled, fuzzy brown skin. Next came the soft, juicy texture of a perfectly ripe kiwifruit and the pretty pattern of edible black seeds that appeared when you sliced it. Finally, there was the taste, surprisingly delicate, with a great balance of sweetness and tartness.

I just had to try cooking with it. Despite the jokes some people made, I didn't use it as a garnish for grilled chicken or seafood.

It had to go into a dessert, and at the time I was not only Ma Maison's executive chef but also its pastry chef. I knew just what I wanted to do: Put it into a variation on France's classic clafoutis, a custardy baked pudding that usually features fresh summer cherries.

I knew, though, that the generous amount of batter in traditional versions of that dessert might drown out the taste of the fruit.

So I came up with a way to modify the recipe by turning it into a tart, arranging sliced kiwifruit in the bottom of a simple sugar dough pastry shell and then covering it with a thin layer of egg custard before baking it.

You can go on using the recipe throughout summer, substituting any sliced stone fruit you like.

The first time I ever served my Kiwi Tart to guests at Ma Maison, they didn't know what to expect, though the look intrigued them.

A first bite, however, put any of their doubts to rest. I'm sure that you, too, will find it both freshly exciting and comfortingly traditional at the same time.

Meanwhile, with a rolling pin, roll out the dough to fit a quiche pan 10 inches in diameter and 1-1/2 inches deep. Crimp the edges and remove excess dough. Line the dough with parchment paper or aluminum foil and fill it with aluminum baking beans, dried beans, or uncooked rice. Bake until the pastry is browned, 15 to 20 minutes. Remove the pan from the oven and reduce the oven temperature to 325 degrees F. Remove the paper or foil and weights from the pastry.

In a small mixing bowl, use a whisk to stir together the eggs, cream, sugar, and brandy just until blended. Place a fine-meshed strainer over another bowl and pour the mixture through the strainer, pressing it through with a rubber spatula.

Cut each peeled kiwi crosswise into 4 slices. Arrange the slices neatly in the prebaked pastry shell. Pour the egg mixture over the kiwi. Bake until the egg mixture is puffy, golden, and set, 45 to 50 minutes.

Remove the tart from the oven and turn on the broiler.

Hold a small, dry fine-meshed sieve over the tart and spoon in the confectioners' sugar. Tap the side of the sieve to dust the tart filling evenly with the sugar. Put the tart under the broiler and broil just until the sugar melts and the filling looks lightly glazed, no more than about 1 minute, watching carefully to avoid burning. Remove the tart and cool on a wire rack before cutting and serving at room temperature.

Put the flour, butter, sugar, and vanilla in a food processor fitted with the stainless-steel blade. Process until the mixture resembles coarse meal, about 15 seconds.

In a small cup, lightly beat together the egg yolks and 1 tablespoon water. With the processor running, pour the yolk mixture through the feed tube and continue processing until a ball of dough forms that rides around the bowl on the blade; if necessary, add up to 1 tablespoon more of the water until the dough comes together.

Wrap the ball of dough in plastic wrap and refrigerate overnight before use. For a single-crust tart, which requires just 1/2 pound of dough, divide the dough in half. Rewrap the second piece of dough airtight and refrigerate or freeze until ready to use for another recipe.